Supporting the Unsupported: Mission & Challenges of the European Endowment for Democracy 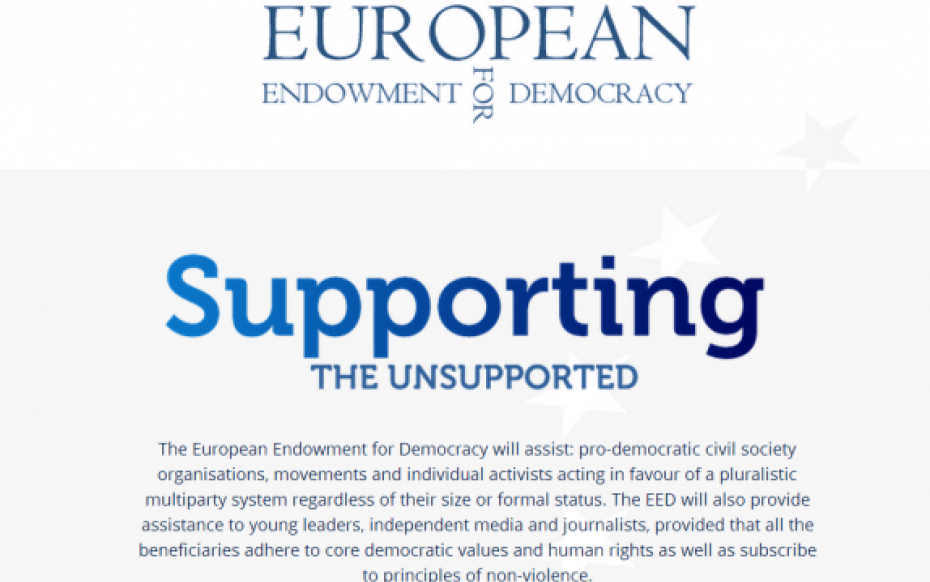 For the European Union, democracy support is both a moral obligation and an expression of enlightened self-interest. Those who live in freedom have an obligation to support those who don’t, if and when such support is desired. At the same time, historical experience shows that democracies are in general more peaceful and more prosperous than countries under authoritarian rule or failed states. Hence, the European Union, its Member States and its citizens have good reasons to assist democrats, support the transition to the rule of law and good governance, and help the development of civil society in the countries of its Southern and Eastern neighbourhood.

The years 1989-1991, with the peaceful revolutions in Central and Eastern Europe, were a perfect example of such a development. Western support for the democracy movements was crucial, and the successful transition of the last two decades has by far exceeded all initial expectations.

In the last ten years, however, it has become clear that the transition to democracy, good governance and the rule of law in the Eastern neighbourhood is by no means as easy (in hindsight) as in the Central and Eastern European countries that have by now joined NATO and the EU. That is because in the Eastern neighbourhood, contrary to Central Europe, civil society is generally less developed, traditions of statehood are often lacking, economic development is far below Central European standards, and Russia has often played a rather nonconstructive role in what it still considers its ‘near abroad’. Since the ‘colour revolutions’ of the early 2000s, there has even been a backslide into more authoritarian rule – for different reasons – in countries such as Belarus, Ukraine and Georgia.

In the EU’s Southern neighbourhood, the enthusiasm after the initial Arab revolts of 2011 has given way to a more sober assessment: Here, too, civil societies are generally poorly developed (although Lebanon and Tunisia look comparatively good), good governance and the rule of law are rudimentary, societies are sometimes deeply divided along sectarian lines or the paradigm of the role of religion in public life – and, above all, some countries are in a civil war (Syria) or and some economies are near free-fall (Egypt). Equally important, Europe as part of the West is tainted in the eyes of many democrats because of its former support for authoritarian rulers. All this makes for a substantial difference to the situation in Central and Eastern Europe in 1989.

In conclusion, it is clear that in most neighbourhood countries today, South as well as East, the basis for democracy support does not exist to the same degree it existed in 1989 and the following years in Central and Eastern Europe. That does not mean one should give up trying to promote central democratic values. But it means that the EU needs a new instrument to make its efforts more political, more sustainable, more flexible and more efficient. Hence, the six key challenges for the European Endowment for Democracy are the following:

• Elections vs. rule of law, good governance and civil society: If there is one overriding lesson of democracy support over the last 20 years, it is that democratic elections alone do not secure democracy, let alone make for a stable and prosperous development. Much more work and resources have to be invested into civil society and its actors and institutions, as well as into the understanding of the rule of law, due process and good governance. Hence, the support for elections and political movements must go hand in hand with a more long-term effort to secure the other factors.

• Good analysis: Democracy support in the EU’s neighbourhood is only possible based on a thorough analysis of the situation on the ground. Assessments of the overall political situation, as well as the crucial actors in the respective countries, and a good overview of NGOs and civil society organisations, cannot come only from diplomatic representations. but must be based on information and analysis from European NGOs that have a permanent presence, as well as local actors themselves.

• Identify the Unsupported: It is often a challenge to identify actors and organisations that are efficient, and fulfil the criteria for support (above all, public traction and/or access to decision makers), and that are not yet supported by any other European or Western donor. This, too, will require close cooperation and coordination with other actors of democracy support.

• Risk management: In many neighbourhood countries , authoritarian rulers pose increasingly high challenges to NGOs and individuals accepting support from external actors (cf. Belarus’ ‘foreign agents’ legislation). In the Middle East and North Africa, there is often not only the danger of legal action against Western democracy support organisations (cf. in Egypt against 17 US & German NGOs), but also a risk of public stigmatisation as ‘agents of the West’. Hence, support must be carefully calibrated to the actual risks for local actors, and damage to them must be avoided.

• Capacity building: In both the Eastern and the Southern neighbourhood, due to the rudimentary structures of civil society, many NGOs and CSOs have poorly developed administrative and analytical capacities. Hence, while they may be politically attractive, any effort to support them must take into account the need to train personnel and provide long term support. This can only be ensured by close cooperation with other democracy support organisations.

• Rivalry/Complementarity: While the EED is an independent private law foundation, it will nevertheless have to not only avoid duplication with existing organisations (such as the EIDHR, or big national political foundations) but also closely cooperate with them. Rivalry is to be avoided, and complementarity is the only way forward.

Hence, the EED will need to carefully balance between political organisations and classical civil society actors, build a solid analytic base (country files), specify the criteria for recipient organisations, take into account the inherent risks in democracy support, be conscious of the need for capacity building, and – above all – cooperate with all other European and extra-European donors and actors in the EU’s neighbourhood.