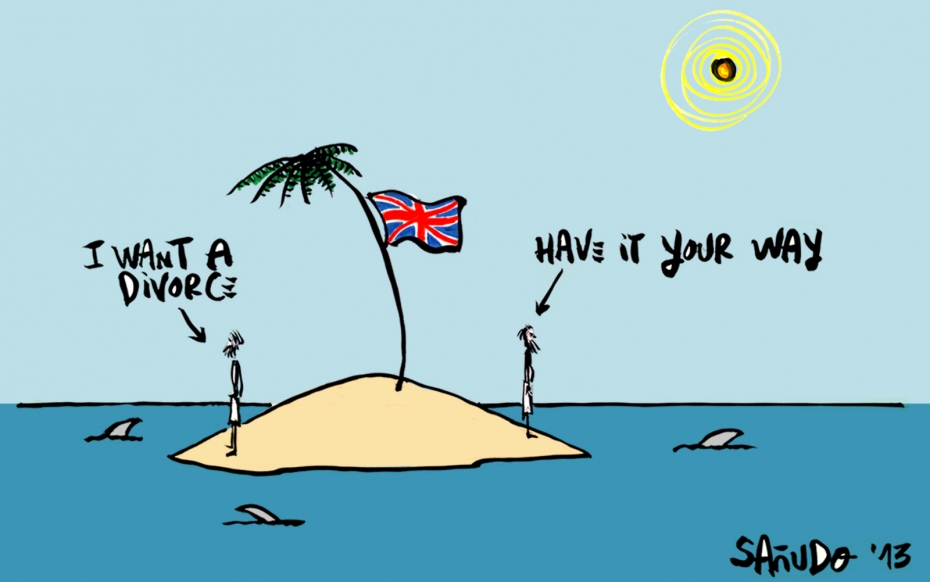 The Conservative plan, as set out in David Cameron’s speech, is to try to renegotiate the terms of UK membership in the EU, if it wins the next general Election, and put the terms to a referendum. The risk is that Labour may feel under pressure to adopt a similar policy, so as to prevent a leakage of its votes to UKIP.It is very unlikely that the results of any such renegotiation, whether conducted by Labour or the Conservatives, will satisfy British popular expectations.  And if that is the case, the UK electorate may choose in a referendum to leave the EU. This renegotiation is likely to be a disappointment because the expectations in Britain are vague and unrealistic. David Cameron did not offer any clear negotiating objectives in his speech.

SINGLE MARKET IS NOT A FREESTANDING ENTITY

He seemed to think that the EU Single Market was some sort of freestanding entity separate from common EU policies on regulation, working time, transport, and education. But for other EU nations, it was in return for policies on these things, that they opened their markets to the rest of the EU, in the first place. The Single Market is a delicate political construct that cannot be easily unpicked. And while accepting that the EU needed to resolve the euro crisis, he wanted  “contrition” to be expressed  by those who created the euro, notwithstanding that  Economic and Monetary Union was on the EU agenda before a previous Conservative Prime Minister negotiated the  UK’s entry terms! He also wanted the goal of “ever closer union” dropped from the EU Treaties, even though that too was part of the Treaty before the UK joined. He is 40 years late with these ideas

RENEGOTIATION WILL BE WITH 26 OTHER GOVERNMENTS

The UK renegotiation will not be   with bureaucrats in “Brussels”. It will be with the Governments of every one of the other twenty-six states in the EU. Britain may want to pay less, but other countries may want it to pay more. Many other EU countries see the very things British negotiators would most like to be rid of – like the working time directive – as part of what they gained, in return for their opening  up to the Single Market in the first place. Concessions on these issues will, in particular, be anathema to left leaning Governments, of which there are an increasing number.
Exempting Britain from the Common Agricultural Policy (CAP), another possible British demand, will get nowhere. Repatriating regional policy will not go down well with countries who have recently joined  the EU, and  whose incomes per head are much lower than those in Britain

ALL EU RULES HAVE BEEN MADE WITH BRITISH INVOLVEMENT

British popular opinion has been constantly led to believe that the  EU is a foreign entity, with which Britain has a sort of treaty,  and not as what it actually is – a Union of which the UK has  a participating member with a vote on every decision.The role of British MEPs, British ministers, and a British Commissioner in EU decisions has been systematically ignored in the UK media and all decisions inaccurately presented as emanating from an “unelected” bureaucracy.

If possible results of a renegotiation are hyped up in the next British General election, and  lots  of “red lines” promised, the actual results of the renegotiation will prove to be paltry by comparison. That could lead to UK exit.

I am particularly worried about the effect of Britain leaving the EU on the fragile situation in Northern Ireland.

Obviously if the UK leaves the EU, it will negotiate a new relationship with the EU.

But what sort of relationship will it be?

One of the big drivers of anti-EU sentiment in Britain is immigration of EU citizens from central and eastern European countries, like Romania, Bulgaria, and the Baltics. Gordon Brown famously encountered this sentiment during the last British General Election.

If the UK leaves the EU, it would be free to restrict immigration from some EU countries. But, as a continuing member of the EU, the Republic of Ireland could not do so. So if the UK wanted to prevent these EU citizens entering the UK through the Republic, it would have to introduce passport controls at Newry, Aughnacloy, Strabane and on all other roads by which such EU immigrants could cross the border from the Republic into the UK.

If the UK is outside the EU, tariffs would have to be collected on UK exports entering the Republic and vice versa. Average EU tariffs are quite low, but some tariffs, on things like dairy products and clothing, are quite high. Customs posts would have to be placed on all roads leading across the border to ensure collection of these tariffs. Smuggling, with all its potential as a funding source for other forms of illegality, would become very profitable again. But the human and political cost in border counties would be the worst aspect of it. Nationalist communities would again feel cut off from the Republic by the inconvenience of passport controls, and of customs posts. Since Northern Ireland came into being as a separate entity in 1920, the large nationalist minority there has retained a very strong sense of identification with the rest of the island. The possible reintroduction of customs posts, and of immigration controls, would undermine the efforts that have been made , in the Good Friday Agreement, to reduce the divisions between North and South and between Ireland and the UK. Given that UK Prime Ministers have had to devote so much time to the so called “Irish Question” for the last 150 years, it is amazing that the current UK debate on EU membership is being conducted as if Ireland did not exist, or the UK had no interest in it. Some might say that  fears of the UK having customs posts and passport controls on the Irish border are exaggerated because they think the UK outside the EU could  easily negotiate a free trade and free movement deal with the EU

UK CANNOT BE BOTH IN, AND OUT, OF THE EU AT THE SAME TIME

There is a big snag here. To enjoy continued free access to EU markets for its goods and services, Britain would have to continue to apply EU rules, as now, but WITHOUT having had any say at all in them – something the UK does have as an EU member. David Cameron had a point yesterday when he argued that the nature of the EU is changing in response to the euro crisis, and as a non euro member the UK’s relationship with the EU will change anyway. But there was absolutely no need for him to promise an in or out  referendum, which places him in a straight jacket.