The Middle Class: Priorities for the 2019 Elections and Beyond

Compared to the 18 months preceding the 2014 elections, the mood music in Brussels could scarcely be more different. But while growth and employment are increasing, vast swathes of the established middle classes have lost faith in their ability to achieve a higher standard of living and to match the social mobility achieved by preceding generations. Increasingly topics such as globalisation, free trade, immigration and even stable political systems are viewed as tools of the “elite” designed to prevent progress for working and middle class families. Politically, this has manifested  itself in a fracturing of the traditional party political system and the rise of a protectionist, combative populism.

To confront these challenges, this paper identifies five social and economic priorities that should form an important element of centre right policy formation. With the ultimate objective of rejuvenating an aspirational middle class in Europe, we argue that only by bridging the gap between the rhetoric of a digitally driven, flexible economy and the day to day realities confronting middle class families can the centre right hope to increase working and middle class support in the 2019 elections and beyond. Such an approach is based on the core social market economy principle of seeking to conciliate economic freedom with social security, while maintaining a high level of personal responsibility and subsidiarity. 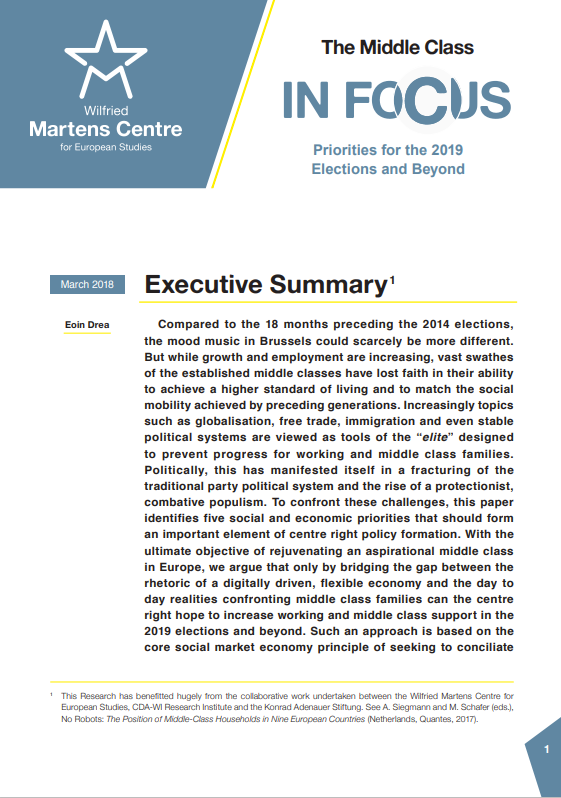