Reforming Europe: The Role of the Centre-Right

In the 2009 elections, the European centre-right emerged victorious, thus affirming its political domination in contemporary European politics. The aim of this book is not to provide an analysis of the factors that contributed to the EPP’s political prevalence. Instead, it is to help this large political family maintain its vigour of political thought and policy prescriptions. The book provides a forum for prominent centre-right thinkers to debate the major European problems of our times, with particular emphasis on the management of the financial crisis and the next institutional steps regarding the European integration project. It assembles the views of politicians, academics and think-tank fellows from different national backgrounds and dissimilar ideological perspectives (Christian Democrats, conservatives and neo-liberals) who unfold their vision for Europe’s future. Moreover, it reflects the origins of contemporary European centre-right parties in order to reaffirm the core values and main priorities that have historically informed their policies. Overall, the book attempts to both highlight and stimulate the centre-right contribution to the discussion of Europe’s main contemporary challenges. 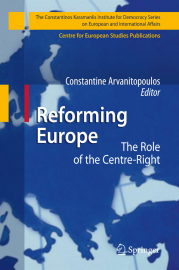