Greece – Between farce and tragedy: Four realities of Syriza in power

The period since the election of Syriza to power in January 2015 has been marked by increased political uncertainty, economic instability and a growing polarisation of public attitudes in both Greece and the EU. The reality of Syriza in power has worsened the underlying economic conditions of the Greek economy, reduced the ability of the Greek state to provide essential public services and led to a clear breakdown in trust with other EU members. The election of Syriza to power did not result in a fundamental restructuring of the Greek or European economies, rather their lack of a coherent strategy (beyond reneging on previously agreed support programmes) has set the reform process in Greece back by several years.

The coming to power of Syriza marked the culmination of pent-up public anger and discontent at prevailing economic/political conditions and the impact of such conditions across wider society. Notwithstanding several years of support programmes, the Greek economy requires further reform in order to ensure its long term sustainability. The shortcomings in the assumptions underpinning the initial programmes undertaken by the EU/ECB and IMF were complemented by implementation weaknesses which further eroded public support for the structural adjustments required. This resulted in a clear division arising between those in favour of the support programmes and those opposed.

The level of financial adjustment required in Greece – over 20% of GDP – imposed significant socio-economic challenges. In the public mind, ownership of the reform process then passed from national bodies to imposed, supra-national institutions, thus increasing resistance at both public and political levels in Greece. Resistance fuelled by populist political parties seeking short-term political gain.

Syriza in power has sought to deliberately widen the gulf between those who acknowledge the long term importance of the many difficult structural reforms required, and those who seek to blame “austerity” for Greece’s current woes. In reality, the experience of Syriza in power has highlighted its complete lack of a defensible economic and political strategy which safeguards Greece’s position in the EU, protects the well-being of its citizens and acknowledges the current standing of the Greek economy. 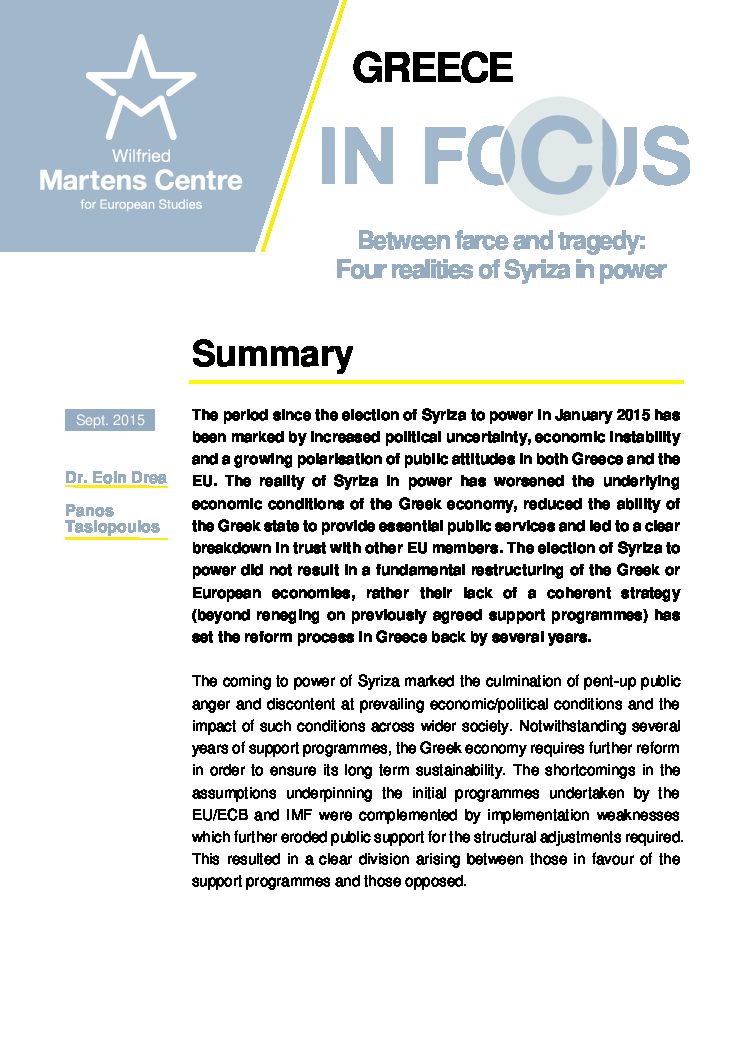