25 Years of Spitzenkandidaten: What Does the Future Hold?

This paper critically reflects on the development and implications of the Spitzenkandidaten system. It makes three claims. First, it argues that, despite the assertions of many commentators, this system did not appear out of the blue in 2014 but has a much longer history.

Since the Maastricht Treaty, a series of steps have been taken that have clearly led the way to this outcome and, in fact, may even lead beyond it. These steps, including the role of the European People’s Party, are explained here as they cast a different light on the whole process, without which the success of the Spitzenkandidaten system cannot be properly understood.

Second, the paper claims that, from a political–institutional point of view, the system implicitly promotes the parliamentarisation of the EU architecture and might eventually lead to a stronger EU executive and a weaker European Parliament, as is the case in most national parliamentary systems. This would be the opposite of what many of its supporters would like to see.

Third, the paper concludes that, in order to avoid this unintended consequence and fulfil the democratic potential of the Spitzenkandidaten system, the current procedure must be understood as an intermediate step on the road to the direct election of the president of the EU. This, however, requires its success and consolidation in 2019. The paper thus ends with some recommendations that will help to make this happen. 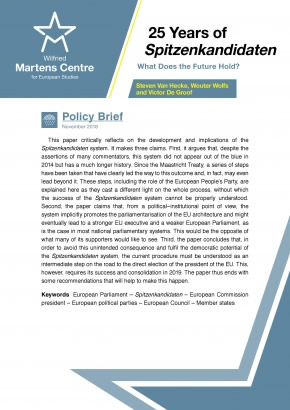