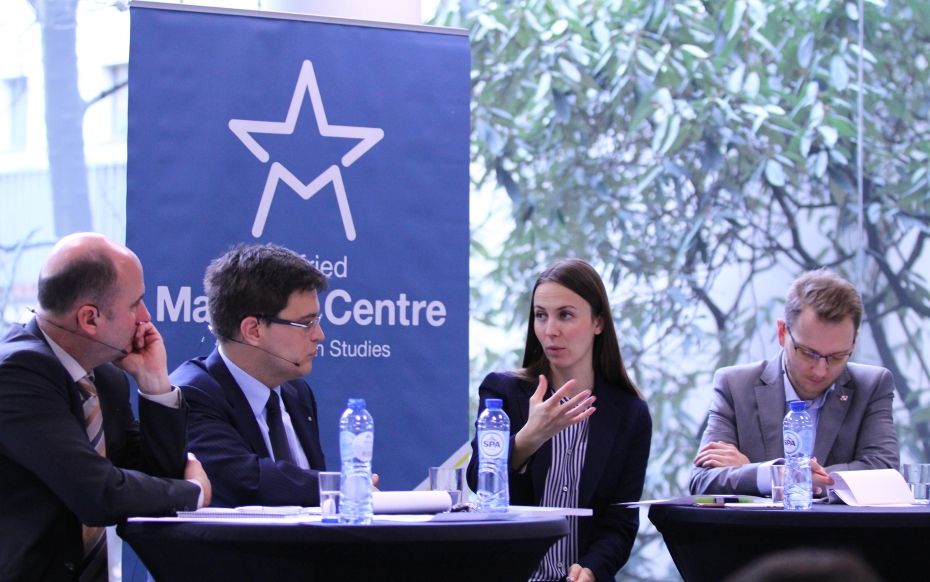 “Brexit and the election of Donald Trump as the new US president have brought the score to 2-0 for populism last year”, according to Member of European Parliament Eva Maydell (Paunova). “The only thing left to figure out is whether we are in the half time or only ten minutes into the game”.

MEP Maydell, together with Martin Mycielski, Founder of the Committee of Defence of Democracy International, and Roland Freudenstein, Policy Director at the Martens Centre, were invited to discuss the resistible rise of populism in Europe, an event named after the title of the latest issue of the European View, the policy journal of the Martens Centre.

The articles gathered under this slightly provocative title, a subtle nod to the brilliant play of Bertolt Brecht, shed light on the interaction between populist parties and conventional parties and make proposals for potential ways forward. They also discuss the role and influence of political communication , as well as the refugee and economic crises, identified as potential breeding grounds for populism.

During the event, the speakers discussed the situation in their respective home countries. According to Martin Mycielski, the disconcerting trend is that populist communication in Poland enforces the perception that “a real Pole cannot be European”. This type of narrative promotes the division of the two identities instead of seeing them intertwined.

In order to tackle the situation, Mycielski proposes to introduce the concept of local ambassadors to the EU. He emphasised the importance of grassroot, local level actions and communication to show people practical and positive examples of what the EU can give them.

Populism is a relatively newer phenomenon in Germany. Freudenstein claimed Germany was “10 to 20 years behind its neighbours when it comes to developing right-wing populism”.

Due to historical reasons rooted in the Second World War, parties such as AfD, the Alternative for Germany, and the PEGIDA movement, have only recently started raising their heads and have rapidly increased in size. Freudenstein, however, thinks it would be unlikely for other parties to form a coalition with AfD after the federal elections later this year.

A problem in tackling populism is that people do not always understand the political solutions offered, as they will benefit Europe and people only in the long-term. When speaking in her home country Bulgaria, Eva Maydell (Paunova) likes to divide her speaking time with experts in certain fields to make the policy actions in those fields more understandable.

Demonstrating concrete outcomes achieved in shorter-term projects is also important, just as well as the established political parties being a little bit more entertaining in their communication, as pointed out by Roland Freudenstein.

MEP Antonio López-Istúriz White gave some sobering final remarks: “Populism is not new in history”, he said, “but today, it is different in its attempts to undermine democracy”. In order not to repeat the mistakes of the 1930s and its symbiosis with extremism, it is time to fight populism at its roots.