I say Europe, you say…? Interview with Marianne Thyssen 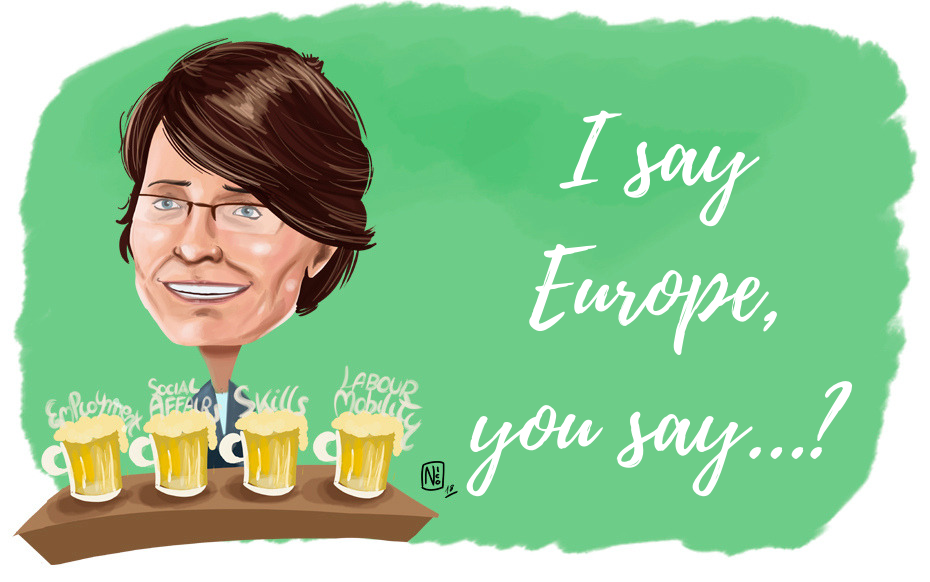 You have been nominated by Alexander Stubb and his question was: Marianne, you had a fantastic career in Belgian and European politics. You have been a role model for many of us in the EPP. What are you going to do next?

Next year I will continue to focus on my job as Commissioner and work hard for a stronger social Europe. It is not enough to launch proposals in order to achieve results for citizens; we also need to finish them. The planes in the air must land.

This is my big priority until the end of the mandate. Afterwards, I hope my life will take on a new dimension. But I’m not thinking of that yet because my focus is on the next 12 months.

What was the first job/gig you had before entering the world of politics?

My very first job was assistant at the law faculty of my alma mater, KU Leuven. Then I worked more than 10 years for the most representative Belgian SME organisation UNIZO, one of the founding members of SMEunited (former UEAPME).

By defending the interests of SMEs and the value of strong social dialogue, I came into close contact with the political world. Herman van Rompuy, party leader of CD&V at that time, asked me to participate in the European elections and I became a member of the European Parliament in 1991.

What is the most interesting myth about the EU that you needed to bust in your career?

That Europe only works in the interest of big banks and companies. That’s a myth. We work for people. People is what Europe is about.

You are the first female commissioner from Belgium and a strong advocate for equal pay. How far do you feel the EU has come in achieving equal pay?

Europe has always been a pioneer in creating equal opportunities and fighting discrimination between men and women. We should be proud of that. The principle of equal pay was already an objective in the Treaty of Rome! Is that enough? No. There is still a pay gap of 16% and that’s unacceptable. We need to make it easier for women to choose both children and a career without being penalised.

A very important step towards achieving this goal is to distribute the caring responsibilities between women and men in a more balanced way. That’s why my proposal for better work-life balance is so important.  In the context of demographic ageing and shortages that we face on the labour market, we cannot afford to leave the huge talent of women untapped. Our initiative can help to closing the pay gap.

We’ve witnessed a reform of Erasmus+ with new funds allocated to new opportunities for adult learning and vocational training. If you could picture yourself starting over and taking up a course, what would it be?

Had I been given the opportunity, I would have definitely wanted to go on Erasmus! It’s a unique chance to learn another language, new skills and to become independent. That’s why I also created the newest baby in the Erasmus+ in the family: ErasmusPro. I want to make long-term mobility also possible for students in vocational and educational training.

You’ve had an extensive career in Belgian politics and end your political career on a high note as European Commissioner. Would you say European politics was more challenging than national politics?

Politics is challenging at all levels. I’ve been locally active for 14 years, I was a Member of the European Parliament for 23 years and I have been a Commissioner for five years now. We work on the same issues everywhere. Growth and jobs. Security. Innovation. Climate change. The challenge is to create a framework in which every person has the opportunity, freedom and responsibility to make something of his or her life.  To make sure we leave nobody behind. If all those levels work well together, we have the biggest chance at being successful.

How to abolish the practice of social dumping whilst enabling the free movement of workers on European level?

By making the rules clear, fair and enforceable. And that’s exactly what we did with this Commission’s work: to ensure fair labour mobility. With the deal on equal pay for equal work at the same place. And with our proposals to update the rules on social security coordination and to create a European Labour Authority.

What was, in your personal view, the most interesting report or piece of data produced by the Eurostat during your mandate so far?

Timely, consistent and reliable data is essential to develop and support our policy making. All data is important, but one of the things I always look forward to receiving is Eurostat’s monthly unemployment data. Every month, since I started this mandate, the figures are getting better. All our efforts are geared towards making sure we can sustain that trend.

Whilst preparing for this interview I came across the fact that you are still cheering for your local football club and visiting their matches. Who was your favourite “Red Devil” this year in Russia?

Football is a team sports so I have to disappoint, I don’t have any favourites. I think the Red Devils did an incredible job precisely because of how they played as a team.

As you were the president of the European Parliament’s beer club for 15 years — may I ask you in the capacity of an expert to tell us which Belgian beer is your favourite one?

Though it was a European club my favourite beer is of course Belgian – Orval.

Choose one of the following: law or politics?

Politics. Because first you need a vision and conviction to turn values into rights.

Do you also offer pancakes?

I’ll always be grateful to my alma mater.. so Leuven!

My dear colleague from the EPP, Mairead McGuinness. My question to her would be: “What is your message to European citizens ahead of the upcoming European elections?”