I say Europe, you say…? Interview with Carl Bildt 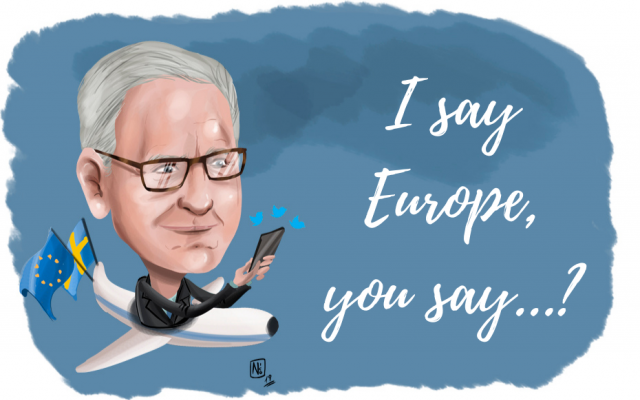 I say Europe you say?

What was the biggest myth about the EU that you had to dismantle during your career? Or to explain to your co-citizens?

There were many, but I think the most common one, and to some extent, the most dangerous one, is the myth that the EU is going to take away national states and identities. I think that we have to make clear to people that we live in a world where you have different identities. For example, I have a regional identity of the place in Sweden where I was born, a national identity as a Swede, and a European identity as a European. The fact that we can upgrade our identities to double or triple ones is very important but sometimes slightly difficult to get across.

You often argued that Europe is far behind China and the US in terms of internet governance, global technology, and digital economy.  How can the EU take the centre-stage?

We are gradually losing that particular race and I’m afraid that when we go to the next stage of the race with artificial intelligence we are going to fall even further behind.  I think what is needed first is that we fund basic research and our universities.  So that’s the number one: fund basic research so that talent remains in Europe. Secondly, we need to have capital markets that work. We need to deepen the digital single market and avoid regulatory digital protectionists.

Could you share with us one of your favourite visits while you were either the Prime Minister or the Minister of Foreign Affairs back in Sweden and why you picked that specific one?

When I was Foreign Minister we also chaired the Arctic Council for two years, so I went to strange places where most people haven’t been.  I am going to mention two.  Salekhard in Northern Siberia up where the Ob River meets with the Cora Sea. The Ob River is six kilometres wide at that point. It is frozen ten months a year and Salekhard has no road connection, no railway connection, but it’s still a really important place.

Second, Iqaluit which is the capital of Nunavut which most people don’t know what it is, but it is one of the northern provinces of Canada, which is a huge area. The northernmost part of Nunavut is closer to Stockholm than to Ottawa and has the population density of northern Greenland.

After French President Macron has stated that the EU should first reform itself before it considers taking up any new members, how do you see the European perspective for the Western Balkans?

I think the French have really messed it up, which is based on a certain reluctance that has been there the entire time when it comes to enlargement and a lack of understanding about what is happening in the Balkans. How exactly they are going to get themselves out of this particular hole remains to be seen. The European perspective for the Balkans is extremely important – we have a role and a responsibility there. And if we back off, it is not primarily about the fear that the Russians or Chinese or anyone else will step in.

It is rather about the fact that the forces of disintegration will take over from the forces of integration and we know from history what that might lead to and why those forces are dangerous. So exactly how we are going to solve this remains to be seen.  I think it will be or rather it has to be one of the key talking points of the Council and the Commission next year. We have a Croatian Presidency in the first part of next year, we have a summit meeting of the EU and the Balkan countries coming up in Zagreb in May.

Over the years some of the headlines in which you have been featured had named you a Twiplomat. In the world of hyper-connectivity we are living in today does it seem like digital diplomacy could replace the public one?

Well, it’s already an obvious part of diplomacy. Of course, more and more of the things that we do are an integral part of the digital sphere. So is diplomacy. You have to be there, in the social media sphere, you have to use all the instruments of digital communication. Because that’s where, particularly young people, live. And if you’re not in the digital world, you’re not in the world.

Speaking of digital, we have seen on your social media that you are a frequent flyer. Do you happen to know how many photos of planes, for example, you have on your Twitter feed, or how many times have you been up in the air?

When I was Foreign Minister, there were some people who were saying ‘you travel too much’ and I said, ‘it is an unfortunate fact that most of the world is outside of Sweden’. Some people have difficulties accepting that fact, but it is a fact. But yes indeed, I must fly quite often as there are no good train connection from Stockholm to Los Angeles.

With which EPP colleague would you choose to assemble a piece of IKEA furniture with?

Probably my wife, Anna Maria Corazza Bildt, but I’m not quite certain that she’d like to do it with me!

As the co-chair of the European Council on Foreign Relations could you maybe choose one favourite project or initiative that you are doing?

There are two things I would like to outline that I think we have devoted our attention to over the last year. The first is European sovereignty issues, same as the Martens Centre is doing, and this has become much more topical, but still remains fairly complicated. European countries are increasingly vulnerable to external pressure that prevents them from exercising their sovereignty.

The second we have done is a work looking at the experience of European common foreign and security policy reforms during the last five years, and see what can be done in order to reform it, less the substance, more the mechanism of institutions and the way they’re working in order to make them more effective. So those are two things that have been fairly high up on the agenda lately.

Which topic would be your favourite one to discuss over Fika?

Over Fika, I want to discuss…the weather. The news of the day. Fika is a time to be slightly less serious, to discuss what’s on your mind today, things like that.

What is, in your view, the most effective level of governance at which we could tackle climate change? Is it the local, is it the regional, is it the national, or the supra-national?

Well, the problem, of course, is that the answer has to be all of the above, I mean we clearly need a global approach. Because if you look at it at the moment, Europe is in the lead, tackling the issue, but we need to do more, we need to implement more consent on what we are going to do. But the main challenge is going to be the coal use of China and India, these sort of rather booming billion-people economies of Asia.

Well, it would be the Euro. At the moment, we don’t have any public support for that, so we had to bet it on the krona, yes.

I very much appreciate the Council as the fora for dialogue with different political leaders of Europe. It is very useful to sit down and listen to the different perspectives that are coming from different nations. If we don’t anchor what we do in Europe on the national level, we are lost. The Commission has its role, which is of indispensable importance, but it is in the Council where we anchor what we do in the different national political cultures.

Which EPP colleague or person would you nominate for our next interview, and what would be the questions that you would ask?

Donald Tusk: what he’s going to do with Viktor Orban. That’s got to be an interesting one.