Why nations fail: A book review 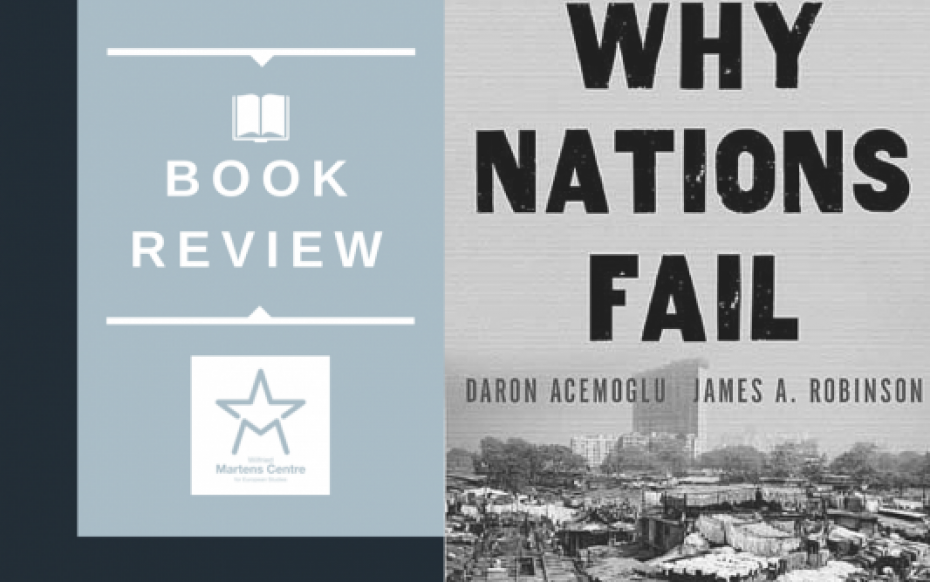 Acemoglu and Robinson have produced a book that has attracted a lot of interest and discussion amongst the ranks of political scientists, institutional theorists and development economists. They attempt to answer a fundamental question that has occupied some of the greatest minds of our age and that has produced a number of illustrative theories.

It is no mistake that the writers choose to address all these theories in the second chapter of the book (titled under the provocative label “Theories that don’t work”). First, they criticise Jeffry Sachs’s approach of economic geography and move on to tackle the vast bibliography that attempts to associate cultural characteristics with economic prosperity (here they point to Max Weber and his monumental work on the Protestant ethic and the spirit of Capitalism).

They try to deconstruct what they call the ‘ignorance hypothesis’:  the theory that political leaders simply do not know the way to lead nations towards prosperity and sustainability. The two authors point out that all these theories fail to explain long-term trends of inequality. They also fail to account for the contributions and the effects of cultural exchanges; of political horse-trading and of the numerous financial aid programmes that have been offered in order to tackle global inequality.

The two renowned professors articulate at length their main argument which is easy to understand and supported by strong historical and modern empirical evidence.

For Acemoglu and Robinson, the main reason that nations prosper or collapse has to do with the structure and the functioning of their central institutions. Concretely they go further than other theorists (see North, Wallis and Weingast in ‘Violence and Social Orders: A Conceptual Framework for Interpreting Recorded Human History’, 2012) saying that  having the effective monopoly of violence or even the ability to form ruling dominant coalitions is not enough. They argue that it is necessary for the majority of the population to be included inside the governing structures. Inclusiveness here is not strictly limited to the input side of the political process. It also refers to the equal (or at least to the fair) apportioning of economic benefits.

In fact, the notion of inclusiveness, as used in ‘Why Nations Fail”,   implies that having people participating at the input phase of policymaking, would inevitably lead to the creation of rules, norms and conventions that will also promote fairer output sharing. Thus the book argues that the fate of nations is closely correlated to whether they are ruled by extractive (that disseminate benefits to limited privileged groups) or inclusive institutions.

A quite significant part of the book is dedicated on listing and explaining cases that are meant to confirm the original hypothesis. The most telling and characteristic example supporting this hypothesis regards the city of Nogales- which lies right on the border between the US and Mexico. The city is administrationally split in half- the southern part is governed by the Mexican national and regional authorities, while the north forms part of the US. Unsurprisingly, despite their common geographical location and their regular cultural exchanges, the US part is far more prosperous rather than the Mexican one.

For the writers it is obvious that this is because of the different respective national and regional institutions that are operating in the two parts of the city. US institutions are far more inclusive and  prosperous as opposed to the Mexican extractive state. ‘Why nations fail’ is a compelling book that attempts to explain and interpret the mechanics of history by adopting a macroscopic method to it. The approach used in the book was heavily influenced both by institutional theory (as developed by Douglas North) and by Lipset’s theses on democracy and economic development.

However, the book is not bereft of imbalance.

The argumentation about inclusiveness as the central factor in whether nations fail or prosper does not acknowledge other important exogenous factors that shape the status of nations. For example, the book fails to point out that violence between states is also a major variable that can decide the emergence or the destruction of nations. Carthage was raised to the ground not because its institutions were not inclusive enough but because it faced a powerful enemy (Rome) that, at a certain point, had focused all its efforts and resources on destroying the city.  Similarly,  global economic imbalances  can lead nations with inclusive democratic institutions into chaos and disorder. For example it is undeniable that the global economic turmoil that erupted in the 1920acontributed to the fall of numerous European democracies and thto the rise of fascism.

Further, the causality between inclusiveness and success is not sufficiently demonstrated. There are several examples of nations that had inclusive and functional institutions but still failed. Inclusive democratic institutions do not guarantee the establishment of governments that are responsible and prudent. It is even possible that the electorate will give power to a government that will fgovern destructively. Such governments may lead nations into druin and the margins of history. Collective rationality does not necessarily lead nations to the best decisions.

In today’s globalised world exogenous variables such as technological trends; international dynamics; security and economic risks can prove to be as decisive for the fate of a nation as its institutions. Acemoglu’s and Robinson’s argument is far from wrong but it is not the whole story of modern governance and nation-building.  “Why Nations Fail” is without a doubt an insightful book but it is also clear that its authors would prefer it to be a magnum opus regarding the study of institutions and statecraft.  Me thinks this is not the case.