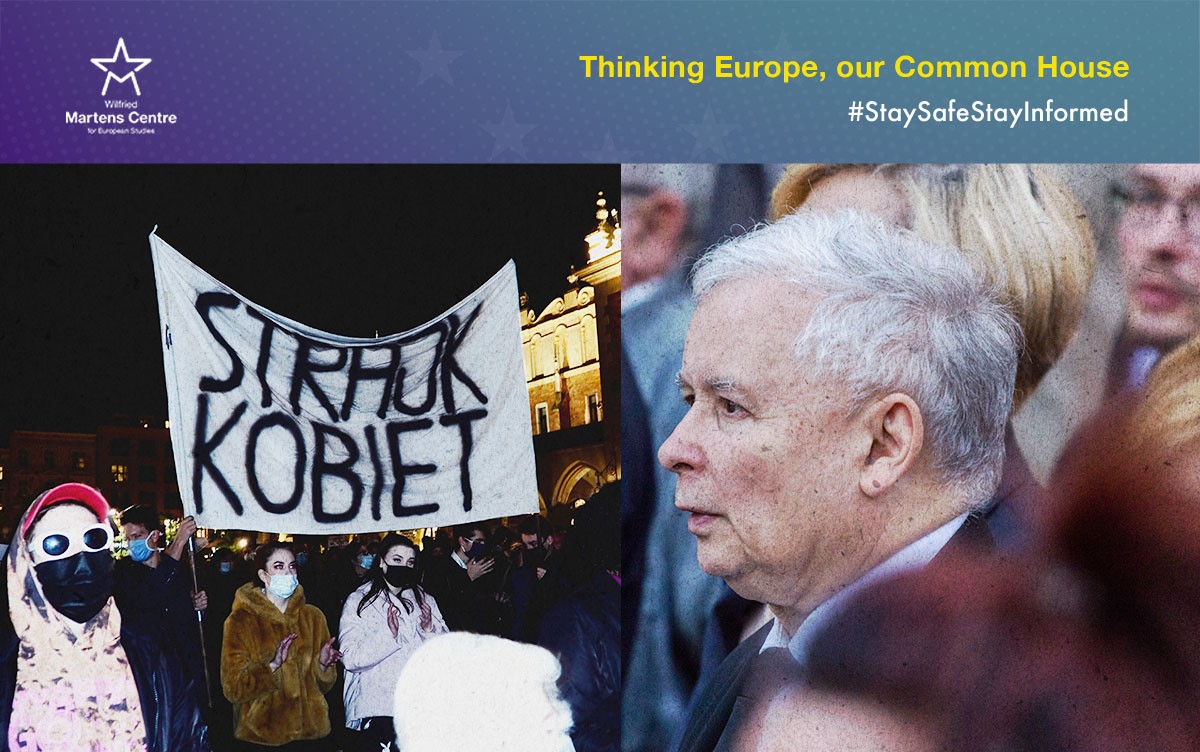 Roland Freudenstein is the Policy Director of the Martens Centre

Konrad Niklewicz is a former Visiting Fellow of the Martens Centre

He has only just entered the government as Deputy Prime Minister, but since 2015 he is the most powerful figure in Polish politics. Poland’s truly momentous political decisions are usually taken by him in the small hours of the morning in his apartment in Northern Warsaw. His name is Jarosław Kaczyński, the leader of ‘Law and Justice’ (PiS), reverently called ‘prezes’ (the chairman) by his fans, and he has ignited a culture war in Poland that may – just may – bring down his government, but that certainly has grave consequences for Poland and repercussions across the whole of Europe. Let’s shed some light on how we got here, what could come of this, and what it means for the EU.

A short history of the ‘Women’s Strike’

After only a few days, this is already the biggest wave of protests in the country since 1989. It was triggered by the Constitutional Court’s ruling of 22 October, declaring most abortions unconstitutional, which were possible until now under the already very restrictive abortion law. Instead of including severe and incurable damage to the foetus, now only rape or danger to the mother’s life are valid reasons to terminate a pregnancy. Considering the ferocity of the protests, there are other factors at play as well, such as widespread frustration with PiS’ way of handling the pandemic – over the summer, PM Morawiecki had declared it ‘over’, and now the health system is already close to collapsing. There is also grumbling about PiS’ graft, arrogance of power, and turning public media into propaganda instruments. Of course, the unlawful politicisation and court-packing of the Constitutional Court plays a big role – both in preparing the ground for the abortion ruling, but also in terms of public anger. Finally, these protests are also about the power of a Catholic Church, which has become more entrenched and determined to resist modernising trends in society. Kaczyński’s motives for his nudging of the Court are certainly mixed: to distract from the pandemic, to shore up the frail coalition in a fresh polarisation of the country, lobbying by the Church, but also, and maybe above all, a genuine belief that it’s his sacred mission to stem the secularisation and liberalisation of Polish society.

The protests so far are leaderless; they are to an extent generational (but protests are always more of a thing for youngsters), but – maybe surprisingly – there is no recognisable centre-periphery divide here, as there was in the recent presidential elections when cities voted very differently from rural areas and small towns. Public opinion opposes the court ruling at 60 to 70 %, and prefers to return to the ‘consensual solution’ of before; only around 10 % support the ruling. Most of the protests are peaceful, although the pent-up anger, especially of women, is visible in the language chosen, as well as the adopted symbol of the protesters: a lightning bolt. In some cases, churches have been smeared with paint, and masses disturbed. While Kaczyński himself, after the first protests, called upon PiS followers to ‘defend Churches at all cost’ (a call followed all too eagerly by nationalist hooligans), President Duda was much more measured and expressed some sympathies for the public anger. Equally importantly, the ‘moderate’ wing of PiS and its slightly more centrist coalition partner have raised doubts about the wisdom of the escalation.

How will it play out?

No one can predict whether we are facing a long-lasting social “revolution”, or just a momentary spike of emotions. PiS may still back down. It may pass a new law reinstating an ‘abortion compromise’, although it may be too little, too late now – many protesters say that the compromise is dead; their demand now is the fully-fledged liberalisation of the abortion law. This may split the protest movement again, but it’s also possible that, with sustained public opposition, cracks in the governing coalition widen. Much will also depend on whether the strongest opposition party, the Civic Platform (PO), can put itself into a pole position. Its most charismatic politician, Rafał Trzaskowski, the Mayor of Warsaw who just narrowly lost out in the presidential election, might make a comeback with his recently founded ‘New Solidarity’ movement, which aims to reach out beyond established parties. In recent polls, PiS is nosediving, PO is gaining ground, and other opposition forces are mushrooming. Although according to schedule, there will be no elections in Poland for another three years, a collapse of the governing coalition might trigger snap elections.

The implications for the EU

These are grassroots protests. Poland’s ‘Women’s Strike’ is genuinely Polish. No Brussels-based ‘moral imperialism’, resolution by the European Parliament, or George Soros-inspired NGO activity can be held responsible for them. Kaczyński’s attempts to frame them as the results of foreign influence make him look like Putin and Lukashenka, putting the blame for the Belarus protests on the CIA. Moreover, the scope and the intensity of the protests prove, once again, that the image of an EU split into a socially liberal West and a socially conservative East, best represented by national populists, is dangerously false.

EU institutions should now focus on the breaches of the rule of law that helped lead to the current situation in Poland, i.e., the assault on the independence of the judiciary. Questions such as abortion legislation itself are truly a national competence according to the EU Treaty, and this should remain so – precisely because to do otherwise would deliver genuine ammunition to Europe’s national populists about an overbearing EU. But the Polish people should be helped much more decisively in their efforts to re-establish the rule of law and to oppose the lonely decisions of a new nationalist elite, which is trying to reap the benefits of EU membership while violating its fundamental principles by the day.