American Democracy at a Crossroads: a Time for Healing 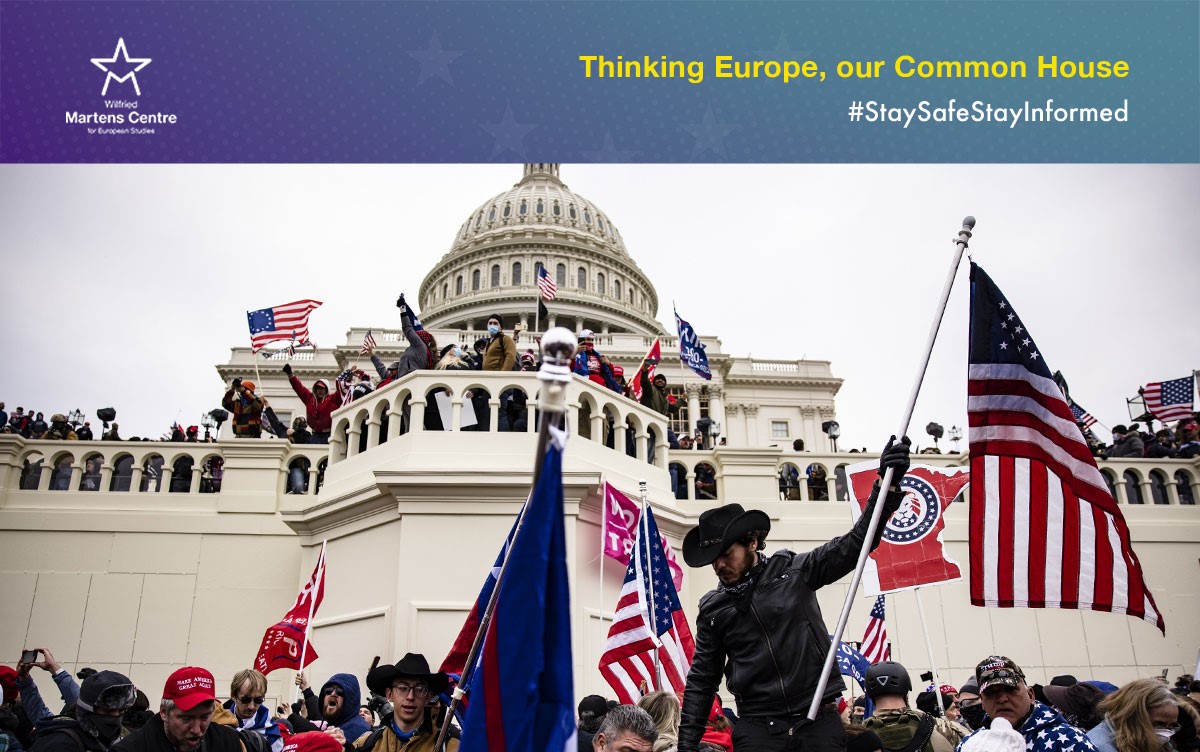 Last week’s scenes at the U.S. Capitol sent shockwaves across the world, delighting America’s adversaries and bringing sorrow to those who normally look up to the majesty of American democracy. The rioting and vandalism in the halls of Congress was a shock to Americans, too. Even President Trump, who incited the mob earlier that day, was reportedly displeased with the “low class” imagery of his violent supporters.

The key question facing Americans and America’s allies is seemingly simple. Did 6 January represent a peak, or breaking point, of worrisome trends that accelerated during the Trump presidency – or was it just another iteration of a process that risks escalating further in the coming years?

The fact that the underlying institutions held firm, the soul-searching demonstrated by Republicans, as well as Trump’s own promise (however half-hearted) to ensure a peaceful transition of power all suggest that the worst may be over.

One imaginable parallel is with the United Kingdom’s Brexit referendum in June 2016, which came shortly after the heinous murder of Jo Cox. The success of the Leave campaign did not herald the beginning of a new dark age for Britain. If anything, the referendum was a culmination of a frivolous and irresponsible populist era and it was followed by the increasingly intrusive reality of Brexit’s practical implications. Whatever one thinks of the final outcome, or of Boris Johnson’s leadership, British politics today appear – to this observer at least – far more ‘normal’ and sedate than in the spring days of 2016.

Trump’s departure from the scene would increase the odds of a similar outcome in the United States. Last week’s violence did not occur spontaneously. Its causes included weeks of delegitimisation of the election’s outcome, by the President, by his campaign, and by prominent Republican lawmakers– all of that on top of years of toxic, grievance-mongering rhetoric that fuelled Trump’s candidacy and presidency.

After last week, the prospect of Trump’s continued control over the GOP has become weaker. Similarly, because of their close association and open support for Wednesday’s ‘putsch’, Senators Ted Cruz and Josh Hawley, the most unhinged demagogues within the party, have seen their chances of running successfully in the 2024 election take a hit. Maybe, perhaps, the fever is breaking.

Ultimately, it is up to American citizens and American leaders to decide which of the two scenarios – recovery or a continuing crisis of democracy – materialises.

Despite this, neither Americans nor America’s friends should get overly euphoric. The single most dispiriting fact about last week’s events at the Capitol is that after the building was stormed and thrashed by a mob seeking to overturn the election, 138 Republicans in the House – or 65 percent of the GOP caucus – still voted to reject the slate of electors from Pennsylvania. Worryingly, in a YouGov poll conducted on the day of the ‘putsch’, 45% of Republican voters agreed with the storming of the Capitol.

Joe Biden will not be the first president whose claim to power will not be recognised as legitimate by a sizeable chunk of the electorate because of deliberate efforts by his opponents. In fact, one has to go back to George H.W. Bush to find a U.S. president whose legitimacy was not seriously contested by the other side. Bill Clinton faced impeachment. George W. Bush was elected by the narrowest of margins in Florida and numerous conspiracy theories proliferated about his re-election in 2004. Barack Obama was the target of the popular birther conspiracy (propelled, among others, by Donald Trump). And, of course, many ‘explained’ Trump’s election in 2016 by Russia’s interference in the election and cheered on as congressional Democrats sought to impeach and remove Trump from office.

The point is not to relitigate the past nor to draw moral equivalencies. There is no question that the events on Capitol Hill were far worse than essentially any event in modern U.S. politics. Neither is there any doubt about the party and the politicians who bear responsibility for this singular attack on democratic institutions. However, when examined from a historical perspective, this episode is just another escalation in a cycle that has gone on for some time and can be reasonably expected to continue.

Last week’s violence was not without precedent. In April last year, heavily armed men (“very good people,” according to Trump) “protested” inside Michigan’s Capitol building. The FBI later thwarted a far-right plot to kidnap the state’s governor, Gretchen Whitmer. And, of course, incidents that accompanied the Black Lives Matter protests in the spring and summer resulted in at least $1 billion in damage across major US cities. Without drawing any moral equivalencies, there are good reasons to be concerned that escalating street violence may become a periodic fixture of American political life.

Ultimately, it is up to American citizens and American leaders to decide which of the two scenarios – recovery or a continuing crisis of democracy – materialises. Whatever policy disagreements one may have with President-elect Biden, there can be no question about the sincerity of his efforts to de-escalate, heal, and bring Americans together. But turning a page will be neither easy nor immediate, and Europeans have to plan accordingly. Importantly for Europe, as the British writer Ben Judah tweeted on the day of America’s embarrassing ‘putsch’ attempt, “After this the whole of tone of American, yes Biden’s foreign policy, needs to change: humility, a lower voice, less zeal. It is not just credibility. It is on America now to prove to its allies it is a reliable entity before it can host a Summit for Democracy or take on China.”

Dalibor Roháč is a resident scholar at the American Enterprise Institute in Washington, D.C. and a research associate at the Martens Centre. Twitter: @DaliborRohac.