Turkey’s Accession to the European Union: An Unusual Candidacy

European views on Turkey’s membership in the EU have been split between those in support of its full integration and those advocating a privileged partnership. To the extent that many of the latter proposals imply that Turkey will be partially integrated within Europe in certain areas, the question of Turkey’s accession is probably not about ‘if’, but about ‘how much’ integration there will be within the Union’s structures. The purpose of this book is not to offer a definitive response to this question. The book aims instead to examine the complexity of the issues pertaining to Turkey’s prospective EU membership by presenting several, often divergent, accounts of the political, security and socio-economic dimensions of the entire process. The book provides a forum for an exchange of views among distinguished scholars and researchers from different national backgrounds in order to contribute to the ongoing public discussion of Turkey’s accession. 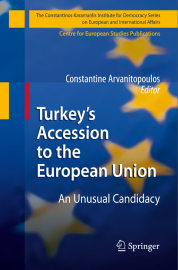