The Power of Freedom: Central and Eastern Europe after 1945

Mart Laar was the Prime Minister of Estonia for two terms, from 1992 to 1994 and from 1999 to 2002. His role in the successful democratic transformation of Estonia made him an internationally recognized expert in “democratic transition”. “The Power of Freedom” tells the gripping story of the journey of Central and Eastern European countries “back to Europe”. It maps the history of Communism in Central and Eastern Europe in times when Europe was divided by the Iron Curtain. On the western side people enjoyed freedom, democracy, the rule of law and successful market-based economies, while those on the other side suffered at hand of violent totalitarian regimes and the socialist planned economy. These regimes destroyed economies and provoked an environmental disaster. The book offers a detailed analysis of the transition to democracy and successful integration into Euro-Atlantic structures. It looks at past achievements, current political, social and economic developments, as well as the challenges ahead – and concludes that the transition has been a true success story. Mart Laar also provides several examples of how the reunification of Europe brought stability and prosperity to Central and Eastern European countries through sound economic policies and democratic political engagement. 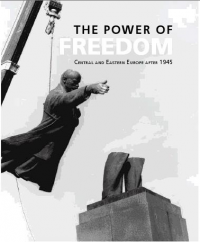