‘Our European Way of Life’ as the Guiding Principle: Shifts in the Understanding of Immigrant Integration at the EU Level

Over the past 17 years, the EU institutions have been issuing non-binding guidance documents on conceptualising immigrant integration. An analysis of the successive iterations of these guidance documents reveals both continuity and change. During this period, the Commission and the Council have attached different meanings to the concept of a two-way process of interaction between the host society and the newcomers. In documents issued in 2004–5, the two-way process contained the requirement for both immigrants and citizens of the receiving country to accommodate each other. Following shifts in public opinion and disquiet about problems with migrant integration in the 2010s, the European Commission adjusted its guidance. In a definition formulated in 2020, ‘mutual accommodation’ gave way to an emphasis on the adaptation of migrants to the receiving society and the obligation of the host country to help migrants integrate into the mainstream culture. In the current parliamentary term (2019–present), the von der Leyen Commission has promoted the overarching concept of ‘Our European Way of Life’ to accompany the new understanding of the two-way process of migrant integration. This concept is anchored in the EU’s secular values of human dignity, freedom, democracy, equality and the rule of law, and bears a strong resemblance to the European Leitkultur, or ‘guiding culture’, of respect for the constitution and the values of the Enlightenment, as coined by the author Bassam Tibi in 1998. 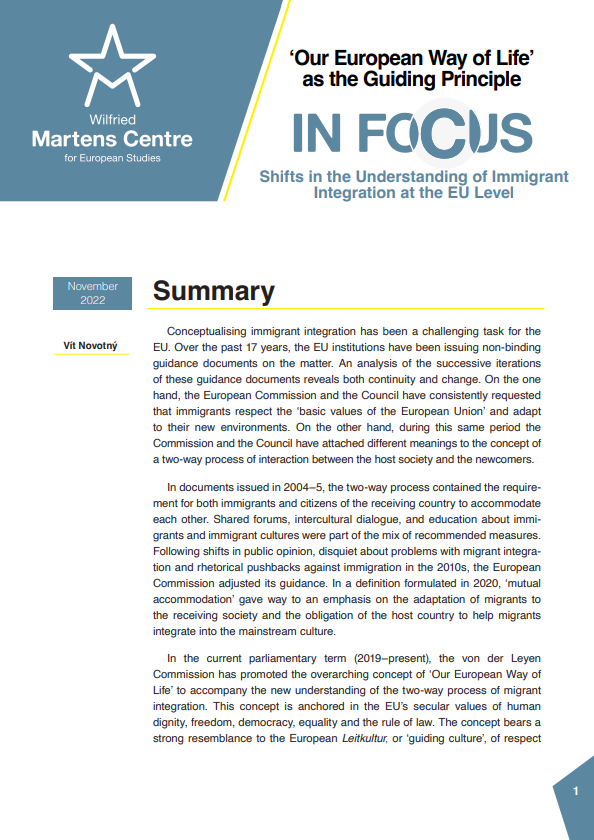