At Europe’s Service: The Origins and Evolution of the European People’s Party

This book tells the story of the European People’s Party: why it was founded, how it is currently organised and what its guiding ideas, values and principles are. It gives an up-to-date account of the party’s contribution to European integration, its work with its member parties and its central role in organising the centre-right in Europe. Above all, this book is for everyone who wants to know what a European-level political party looks like, how it is structured and how it acts. 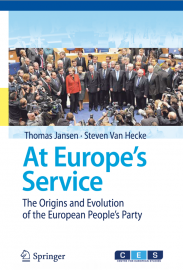