MEP Jacek Saryusz-Wolski: “On Russia, we should move from appeasement to containment” 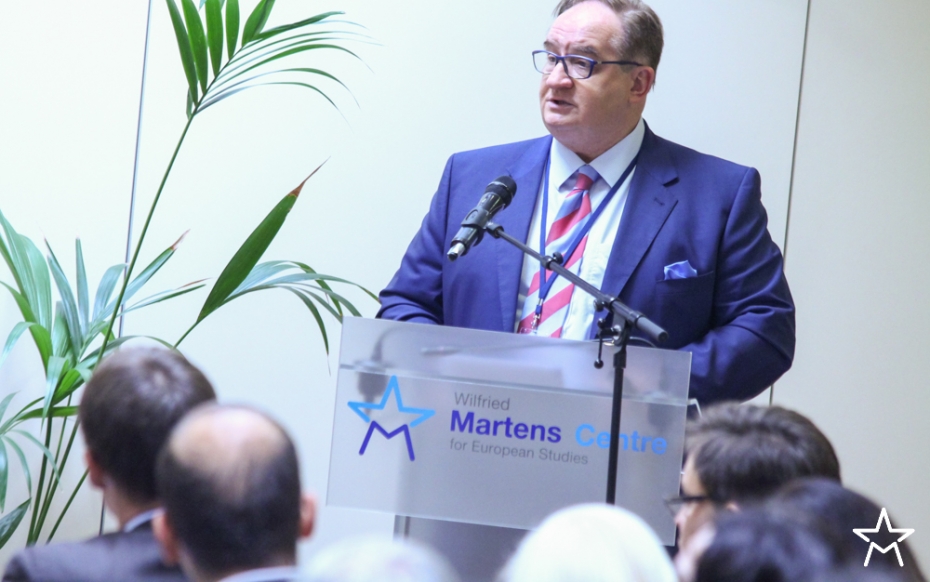 Jacek Saryusz-Wolski (PL), Vice-President of the European People’s Party, is known for his clear and often controversial opinions on Europe’s relationship with Ukraine and Russia. In this interview he offers his views on the Eastern Partnership program. He also explains why the Euromaidan movement that he nominated for the Sakharov prize should win this prestigious award (the winner will be announced on October 21st).

Is the Eastern Partnership a successful project?

The project was first drafted when Europe’s relationship with Russia was approached within a different paradigm. The design was right, but our assumptions were wrong. We wanted to be encircled by a ring of friends whereas it is now apparent that we are in fact encircled by a ring of fire. Eastern Partnership is a geopolitical project – had it been perceived as such from the beginning we wouldn’t have the current problems. As signora Mogherini said during her hearing: ‘There is no such thing as strategic partnership with Russia.’ When diplomacy fails, the time comes to act, so we should now move from appeasement to containment. We need to move from the paradigm of ‘Russia first to Russia next’. When we are eventually successful in our Eastern Partnership, I believe that we will also achieve change in Russia, because that nation doesn’t deserve the today’s situation.

How should we reform the Eastern Partnership project?

The goals should remain as they are: to provide our Eastern neighbours a chance to achieve European standards in society, economic life and the rule of law. But we should move from the current state-centric approach to a citizen-centric approach. The project should be also enshrined by the European Union as public. Unfortunately it was seen in the beginning as a purely political project and the public wasn’t involved.

How can we involve the public?

By encouraging EU civil society to engage with civil society in our Eastern neighbours. We should provide financial assistance directly to civil society and not through intermediaries. Also, gates of programs like Erasmus+ should be opened as wide as possible. Nowadays, Ukrainian students can participate only in Erasmus Mundus program. And as was already achieved with Moldova, we should have a visa-free relationship with the Eastern Partnership countries.

Why should the European public care about these countries?

We should care because European values in our neighborhood mean more security and prosperity for us. Countries like Georgia, Armenia and Azerbaijan are not distant. They are closer than we imagine.

Should the aspiration of the Eastern Partnership be accession to the European Union?

At this stage, no: because there is no agreement among the member states about enlargement, so we should stick with the position  enshrined in all the documents of the European Parliament  that based on Article 49 of the European Treaties these countries may apply for membership only if they fulfill the prescribed conditions. But at this stage we should focus on the association stage, which is very robust already. It means wide opening in political and economic terms, but also meeting most European standards.

Is Georgian or Azerbaijani accession realistic, even in the distant future, considering that they don’t share a border with the EU?

They do share a border – the Black sea. In the more distant future they are potential members, but at this stage raising this debate is counterproductive.

How will the situation develop after the elections in Moldova and Ukraine that are taking place in October and November?

It depends whether Russia will continue its warfare. It is highly probable that it will continue and we should be prepared to help those countries resist Russia by raising sanctions and by helping them to arm .

You nominated Euromaidan, represented by four people: Mustafa Nayem, Ruslana Lyzhychko, Yelyzaveta Schepetylnykova and Tetiana Chornovo, for the Sakharov prize. Do you think Euromaidan is deserving of this prize?

To the highest degree. If Sakharov was alive he would surely give his vote to Euromaidan as the very embodiment of the values for which he fought for.

Isn’t it just a political decision? Wasn’t there also violence on Euromaidan?  And can it succeed in a competition with such candidates as a Congolese doctor Denis Mukwege, who treated over 30 000 women raped by war criminals?

All of the nominees are excellent people deserving this award. My candidate is Euromaidan because of the precedent it sets in nature, size and courage of the people. For the first time in history, people were dying under the European flag.