I say Europe, you say…? Interview with Esther de Lange 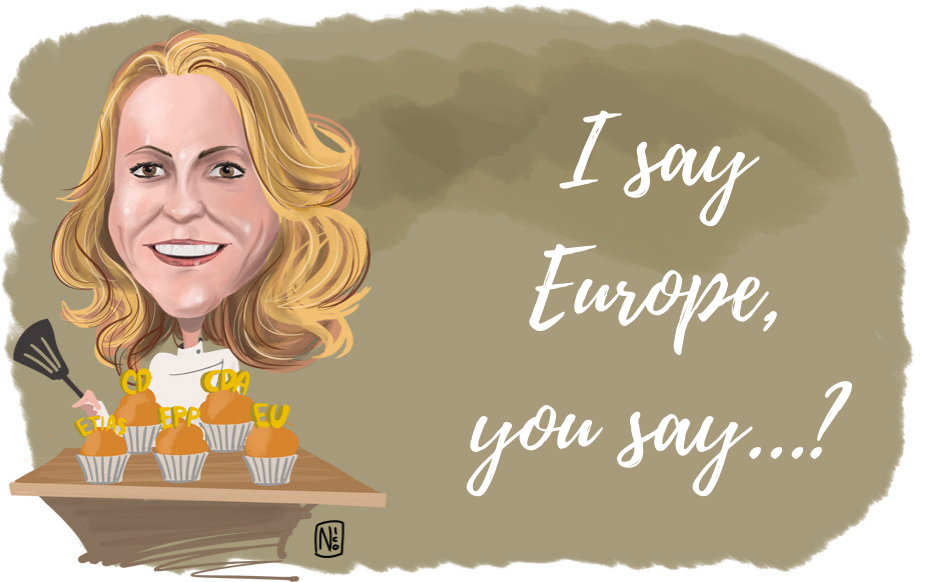 Our future. A lot of people focus on the past and the fact that Europe has brought us peace; today Europe is about our chance at having a voice in the world and being able to properly face the challenges of the future. Europe is our future.

You have been nominated for this interview by EPP Group Chairman Manfred Weber and his question was: “What do you think could be the best way to open up what is sometimes perceived as the black box, the European decision-making process, to the people?”

Chairman Weber has announced that he is entering the race within the EPP for the nomination for Spitzenkandidat. This nomination process is a clear-cut example of transparency in the run-up to the election of the President of the European Commission.

Secondly, and I say this as Vice-President of the EPP for Relations with National Parliaments, we have to inform but also be informed by national parliaments. We need to know: what do they find important, how is their European debate taking shape and thirdly to take into account that there is a lot of frustration in Member States or amongst citizens about Brussels.

These frustrations are caused by what are sometimes very technical things and not even political decisions. Therefore we should be a lot clearer in communicating to our citizens who makes which decisions here in Brussels and back home: we would have to clean up the comitology procedure to make it more transparent.

What do you perceive as the main long-term repercussions of the trade war with the US as regards to the Future of Europe?

A trade war is always lose-lose. Trump, in this case, is not helping the people who actually voted for him and who work, for example, in car and steel factories. However, you do notice that Trump’s arrival in the White House coincides with  a more assertive policy from China when it comes to direct investments in Europe, and together with Putin’s divisive rule, in a way they are forcing Europe to take a more adult approach. That’s a good thing!

There was a great Dutch football player, Johan Cruyff, who always said that every disadvantage has an advantage. The advantage of the current disadvantage, which is the difficult trade relationship with the US, is that Europe is growing up quickly.

I had to bust many, I have to admit; I even had municipalities in the north of the Netherlands saying that they have been forced by the Commission to collect their garbage in a certain way. Obviously, this was not true at all.

Perhaps the one that I got angry about recently is a funnier one. It was around Christmas time and in the Netherlands you often have the Salvation Army collecting money for people in need. So, for years, in a big shopping centre in Utrecht we had a Salvation Army guy dressed up as Santa Claus collecting money for the charity. And then, I saw an article in the local newspaper saying “Europe bans Christmas, charity fundraiser” and I thought: that can’t be true! I got really angry, got to the bottom of it and it turned out that it was the new owner of the shopping centre (a hedge fund, by the way), who in reality didn’t want the money raising to take place in his shopping centre. So we immediately busted that myth and corrected it.

Having had an Erasmus-experience as a student yourself, in your view, what would be the main benefit of increasing the funding for the programme?

Well, what is so healthy about Erasmus is that you are forced to look at your own Member State from the outside and see things from a different perspective. That’s always a very positive experience. I would like for as many people as possible to be able to have that opportunity. This is why the Parliament has always been pushing to increase its budget and the Commission got on board to initiate the increase for the next period.

Personally, I would love to extend this experience not only to those who go to university, because they are the exception to the rule. In fact, most people don’t. They go to technical colleges after completing secondary school. So why not maybe come up with another format of Erasmus, find a way to also provide that experience to all the young people, not just university students.

One of your Instagram posts shared an amusing insight into the experience of being a trainee in the Brussels bubble. Namely, you posted a photo of notes written by your intern having difficulties identifying between 751 MEPs. Recently, the EP Bureau voted on banning unpaid internships, what is your take on this?

I have a bit of a double feeling about that because I started as an intern myself. I was working in Brussels part-time and I really wanted to work in the European Parliament, so I wrote to all the MEPs of my political party and I offered, on a part-time basis, to work for them for free just because I wanted this experience so much, next to my part-time job. In the end, one MEP offered me a paid internship, though initially I offered to volunteer.

Therefore, I don’t think there’s a problem if someone is willing to do it on a voluntary basis and if it’s a really short period of time and a first working experience. However, I always pay my interns. What we have to tackle furthermore is abuse. There has been abuse in the sense that people are full-time working, either not paid for a long term or on a very low wage under the excuse of being hired as an intern, and this is not the way to go! We want to be a social market as well, so we have to give the right example ourselves.

We are already less than a year away from the European Elections. Over the past few years support for the far-right has been increasing, as has been the case in the Netherlands. What can be done to counteract them and bring centre-right politics closer to the people?

In a way, you actually saw this support going down after Brexit, same as the support for Nexit actually decreased after people saw what it actually means to leave the EU. But populism is on the rise everywhere in Europe, so also in the Netherlands. What helps is to show that a lot of these people, these politicians, they actually copy what voters say, which means that they are good at understanding, or like Clinton would say at “feeling the pain.” But they are not actually providing answers and delivering solutions, and we need to show that.

I think a lot of people will grow tired of these new populist politicians rather soon, because people understand that though it’s nice that somebody feels your pain, you might want them to address the issues at stake as well, in which case they should maybe look at a trustworthy political party like the EPP.

In one of your previous interviews, reflecting on Brexit, you have stated that Europe has always been sold as something economic, where you can calculate the benefits. Which vision for the Future of Europe should be championed to portray the EU as more than just that?

That was pretty much a paraphrase of Delors saying that you don’t fall in love with the market. That’s just a part of the problem. One British colleague also said to me “we always told the Brits that they were entering a market”, but Europe is just so much more than that. I really think that Europe 1.0 was the Europe of 1945, 1952, 1957. It was really about war and peace between France and Germany and it was such a huge achievement.

But, for the younger generation the European project is something they take for granted. Europe 2.0 emerged basically after the Wall fell. Indeed, that was the completion of the market and there was an enlargement and the zeitgeist was very economic.

Considering that you are a passionate advocate of principles of subsidiarity and proportionality, how far have we come in adapting our EU corporate tax system to reflect these?

The problem with the whole tax issue (don’t mention the “T” word) is that it is not a European competence. Small and medium enterprises have to pay their taxation, while the big tax giants pay in a very limited way or not at all and people are angry about that. So here you actually see a clash between something that is not a European competence and people asking us to make it a European competence.  So I think in these cases where these companies make a lot of money, some of them get our data for free, etc., they should take their responsibility as well with regards to paying tax, so that we can continue to be a social market economy.

As a working mum, what are your “must haves” for your children’s schoolbags?

Actually, I am pretty organised in getting their bag ready in the morning. What I essentially need is my phone because my phone is my lifeline to everything that goes on at home.

Once during an EP Plenary I was seated in the front row, and there was a debate taking place with the Belgian Prime Minister, and I got a message from the babysitter asking about my son’s football training equipment.

Not to complain, but I really think this doesn’t happen too often to my male colleagues. But the advantage of being a woman is that actually without even looking, I knew exactly where it was! So as long as I have my phone, the issue will get solved.

If you had to spend your summer vacation with one colleague from the Parliament who would it be and why?

You know, I think my colleagues are absolutely fantastic, but I did enjoy the fact that I didn’t see them for 3 whole weeks and I actually managed to catchup on my reading, enjoy nature and lovely French cuisine. So no, in that regard, I can’t imagine spending my holidays with them, I think it would be very unhealthy if I did!

Choose one of the following: Belgian waffles or stroopwaffels?

Cheese from all over Europe. I do not have a sweet tooth. Cheese anytime instead!

Both are very important, but I would choose ETIAS (European Travel Information and Authorisation System). Because it is of fundamental importance to actually show our citizens that we can be strong in protecting our borders, while simultaeously upholding our soft values, like bringing assistance to the refugees that really need it.

Policy making, of course! I am a politician after all, but, in a way, they have a lot in common. At home, baking helps me relax after all the policy making. Both can be messy jobs. But what counts is the end result, both in home baking and policy making. So that’s what you should judge us on.