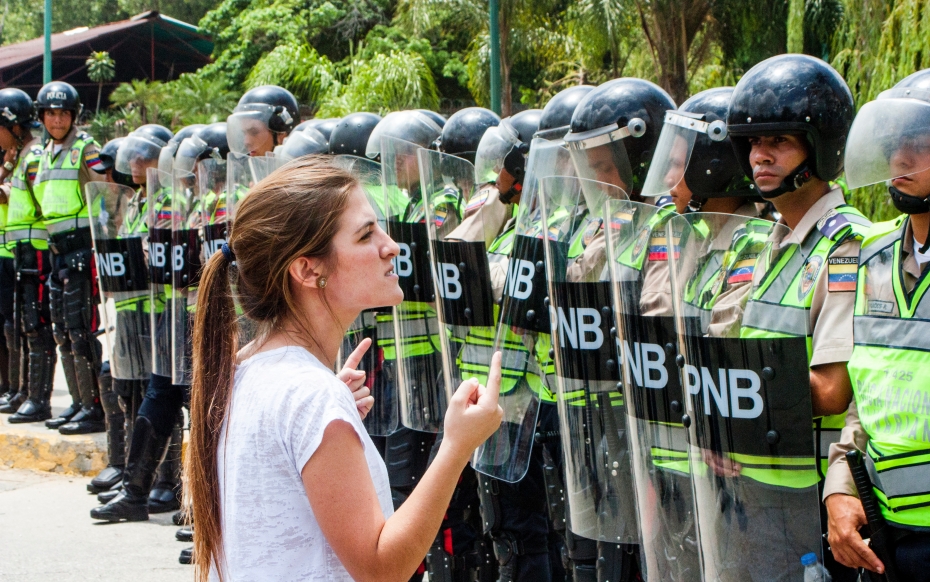 Superficially, one might frame Venezuela’s current drama as the classical conflict between a regional hegemon (in this case: the US) and a nearby country (Venezuela under Chavez/Maduro) whose government tries to escape the bully, seeking outside help (read: Russia) and promptly being confronted with a hegemon-sponsored insurrection (Guaidó).

In other words, Ukraine in the Americas. That’s the picture that Kremlin media are painting, pointing once more at the alleged ‘hypocrisy’ of the West, unfortunately but predictably seconded by a ragtag coalition of European ‘progressives’, populists and self-appointed geo-strategists.

In their eyes, what we are seeing is just another case of the jungle growing back over the remnants of the Western-dominated world order of the second half of the 20th century. In that vein, it would make sense for Europe to stay out, or limit its actions to the habitual appeal to both sides ‘to refrain from escalation and exercise utmost restraint’.

What Venezuela has in common with Ukraine

But nothing is further from the truth. There is a parallel between both cases, but it works exactly the other way around than self-appointed realpoliticians and progressive Kremlin appeasers would have it. Just like Viktor Yanukovych in Ukraine in 2014, a systemically corrupt, kleptocratic leadership under first Hugo Chavez, then Nicolás Maduro, has ruined the country – albeit in Venezuela’s case even more dramatically than in Ukraine’s.

In both cases, Putin’s Russia has been the protector of the corrupt regime, doing its best to help the local strongman to suppress any democratic opposition and trying to keep out Western support for the democrats who want nothing else than to restore a modicum of stability, regain prosperity and enhance the rule of law – again, this happened even more drastically in Caracas than in Kyiv.

But as much as the Kremlin may be able to destabilise Ukraine through military aggression and try to prevent it from politically becoming part of the West, the question is: why does it cling to an apparently lost cause such as keeping Maduro in power in faraway Venezuela?

There are several factors at play: first of all, Maduro’s reign may not be such a lost cause, at least in the immediate future. Assad’s rule in Syria seemed over by the summer of 2011. Eight years later, he is firmly back in power, thanks to a combined Russian and Iranian intervention.

Although it is unlikely Russia or any other outside player would intervene in Venezuela as massively as that, it is very much in Putin’s interest to demonstrate that authoritarian rulers can be saved if they are friends with him. Allegedly, 400 private security personnel have already been sent by the Kremlin to Venezuela.

Second, as the Kremlin thinks of the world in terms of spheres of influence, and of relations between Russia and the West in zero sum terms, it makes perfect sense for Putin and his entourage to not only defend his own ‘backyard’, but also attack the opponent’s.

Third, every ‘saved’ autocrat across the globe helps the Kremlin to spin its narrative that authoritarianism is the wave of the future, and democracy (i.e. the West) is on the wane.

Putin has this point in common with all other autocrats around the globe, of course, as well as the fourth point: the strict principle of non-intervention other than to save the incumbent government, no matter how illegitimate, and the total rejection of any Responsibility to Protect (R2P).

To defend Russia’s substantial investments into Venezuela may be a fifth point: at a time when real incomes are falling in Russia itself, costly foreign adventures that bring no returns are increasingly hard to justify.

Sixth, in Xi Jinping’s China Putin has a powerful ally – whose financial investments weigh even more heavily than Russia’s. Xi, although less keen than Putin for open confrontation with the West, nevertheless does subscribe to most of Putin’s points regarding a global effort to sustain autocrats.

The delusion of realpolitik and the correct response of the West

The West urgently needs to react to this, and demonstrate that solidarity against dictators can be stronger than the naked violence used by Maduro’s regime against its own people. Prolonging Maduro’s rule would not only be inhumane for the Venezuelans.

It would also prolong a source of instability, mass migration and organized crime that Venezuela has become in recent years and that threatens the entire region.

Support for Venezuela can range from political declarations to aid deliveries, to financial and other support for the opposition, to economic sanctions against the regime and ultimately – as a means of last resort – to military support or intervention. Especially the latter point is hotly debated, after the experience of the past 2 decades in Afghanistan, Iraq, Libya and Syria, but to take military intervention off the table from the very beginning is nonsense.

The question is not whether ‘war is the solution’. The question is always whether we can come closer to any solution without the use of the military.

Venezuela today, just as Ukraine in 2014, show that saving the incumbent government for the sake of international stability, if it has as consistently failed as here and begins to slaughter its own population, is neither realistic nor humane. It breeds catastrophe.

Venezuela used to be a rich country for Latin American conditions; it has a middle class (in place or in exile) which is capable of returning stability, democracy and prosperity to this country. That is why Europe and the Americas jointly need to act now.