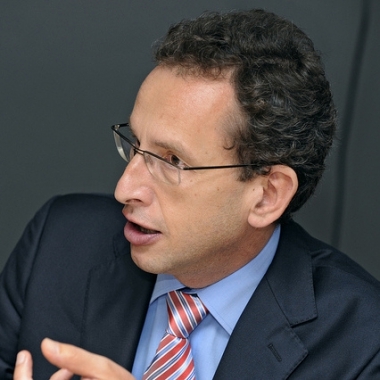 In the EU we have the luxury of reflecting upon if we would rather have a one-speed or two-speed Europe, we complain that governments do not do this and the EU does not do that. We take our democratic rights seriously every four years when we go to elections.

If we are really pissed off, we vote for someone who appears to be fresh and critical of the non-performing political mainstream. Someone like a populist, for example. And then we go back to our day-to-day lives.

Maybe lash out some discontent on Facebook, Twitter or, exceptionally, in a critical blog post. You could call this hamster-wheel democracy: it takes some steam out of the system, but nothing much changes. There are places in Europe that do not have this luxury.

Say you want a revolution?

Ukraine is the only former communist country that had not one, not two, but three major civil uprisings, in 1990, 2004 and 2013. What people have learned from these repetitive revolutions is that it does not suffice to go on the streets and achieve political change.

They have found out – the hard way – that things also need to happen after revolutions. There needs to be a follow-up after each revolution: improvements, modernization, reforms. In a word, real change.

The revolution taking place in Ukraine today is not on the streets. It takes place on the internet and on the social networks (real and digital) that civil society is weaving.

Ukrainians have been seeing failure in the running of the country top-down, both during communism and during post-communist democracy. The first failed spectacularly, the second only had mixed success.

The long legacy of communism left the country with poorly performing public services – education, healthcare, public administration, justice, police, and the list can go on. Corruption – small and big – has always been a way to get things done.

Democracy made corruption worse. Communists had privileges without having to resort to corruption. Corruption of others in communist times was suppressed by secret and non-secret police.

After 1991, communist institutions failed to be transformed into inclusive institutions at the service of the citizen. Instead, extractive elements on every level were preserved, institutions and monopolies extracting profit enabled by their position of power.

Ukraine was failing to create an inclusive “infrastructure of opportunity” for all. This is why nations fail, Darren Acemoglu argues.

After Euromaidan, people are determined to change that; citizens even more so than the government. Coming from Slovenia where we are tired and depressed from not seeing reform, it was so refreshing to see many young people who were literally taking matters into their own hands. Not by becoming politicians, but by facilitating bottom-up policymaking and bottom-up state-building.

An example of the first is the “Reanimation package of reform” movement that is basically doing the job of a reform ministry. It is similar to what I had in Slovenia in 2007-2008, or what the prime minister of Slovenia Mr. Pahor had in 2010, the “reform scoreboard”. They – civil society – are pushing for reforms and overseeing their progress: speaking to the Rada, lobbying the MPs, talking to the ministers.

This includes more than 80 NGOs, such as the Ukrainian Center for European Policy, Institute of World Policy, Europe without barriers, Civil society Institute, Anti-corruption Action Center and others.

Examples of bottom-up state-building are the numerous on-line services that civil society is developing on top of government open data. Some match and exceed the quality of similar services that are being created by bureaucracies in the West.

For example, the online service that makes spending from national budgets totally transparent, or applications which allow citizens to decide how to use parts of the city budget.

In some respects, Ukraine is a huge living lab of participatory democracy.

The first fights corruption, the second improves the management of local communities and makes sure that public money is invested where citizens consider it important.

But more importantly, such online services create commitment, a sense of belonging, ownership and improve the web of trust in a society. The thousands who participate in creating those services and the hundreds of thousands who are taking an active part in using them form a resilient social network, independent of potential hacking, control or censorship on mainstream social networks. These are the people who will go to the streets again if needs be to protect Ukrainian independence and democracy.

In some respects, Ukraine is a huge living lab of participatory democracy. And more: it is an example of participatory state-building. As should be the case after revolutions, the people are taking power.

From what I have seen it is not so much about taking power in Ukraine, but about doing the work for the country and building it again with the expertise of NGOs such as Center for Innovations Development of Kyiv-Mohyla Academy, Center for Democracy and Rule of Law and Easy Business and Center for Economic Strategy.

I find the very idea that people, freely collaborating on the internet, can come in and deliver where the state and its bureaucracy are failing, fascinating. It is not another Facebook or Twitter revolution. It is not the “click-tivism” of likes and retweets. It has serious elements of online bottom-up state-building.

It also puts Ukraine on the world map, not as a country that has the Сrimea and “coal and steel” problems with its big neighbor, but as a hub of technology for participatory democracy and know-how of civil-society-driven reforms.

This technology and the related social know-how is something we could use in the West as well – to take some wind out of the sail of the populists, for example.