Trump – the ugly American and the rule of law 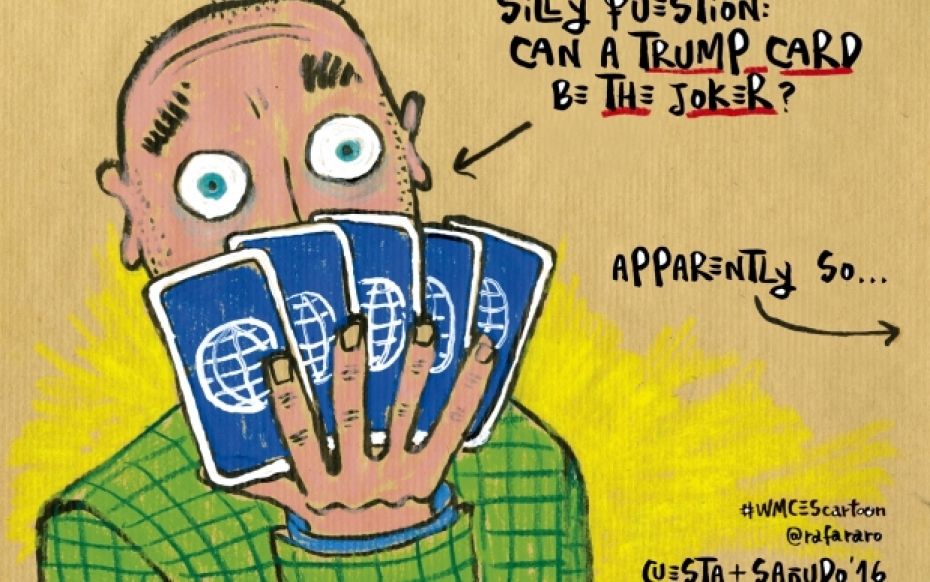 Yes, he’s vulgar, self-obsessed, sexist, racist and full of lies. He has never held elected office, no governing experience, and no recognisable plan. There’s no question that a Donald Trump presidency would be a disaster for the United States, its partners and the world. The question is whether it would be the end of the West as we know it, as Anne Applebaum wrote.

As far as Europe is concerned, much of the apocalyptic warnings we are hearing after Super Tuesday are based on a lack of knowledge about how American democracy actually works. Take an example: A German commentator on 2 March described what he considers Europe’s worst nightmare: being ‘squeezed between Putin, the ice cold cynic, and Trump, the boastful narcissist.’  Now, this statement, first of all, harks back to the time-honoured tradition of many Europeans to place themselves politically somewhere in equal distance between the United States and Russia. So far, so bad. But second, and more importantly, putting Putin and Trump on the same level completely ignores (or willfully sidelines) the powerful checks and balances that the Founding Fathers built into the American polity – and that are completely absent in  Putin’s authoritarian kleptocracy.

These checks and balances are present on both the formal and informal levels. On the formal side, Congress is arguably the strongest. In case of a narrow victory in November (a landslide can be, frankly speaking, neatly excluded), I consider it very doubtful that a President Trump could amass a Congressional majority – so he would have to constantly negotiate: at which he excels, in his own words, but which means that many of his ‘projects’ would not see the light of day the way he is boasting about them now.

But there is also the Supreme Court and the States. Finally, there are international commitments that would be protected, if push came to shove, by soldiers and public servants disobeying presidential orders should they fly in the face of international law. Add to this the powerful informal checks and balances, such as public opinion, civil society and Wall Street, and you have a strategic difference between a hypothetical US under Trump and the very real Russia under Putin. European commentators too often overlook this.

Having said all that, many moderate Americans, including many conservatives, are also spooked by the prospect of a Trump presidency. Even they invoke the nightmare prospect of a Trump presidency taking an authoritarian turn but the urgency of their appeals may be explained by the fact that they are in the position of actually being able to influence America’s development over the upcoming months, contrary to Europeans whose attempts to help liberal American presidential candidates (for example in 2004) have never been helpful, to put it mildly.

Moreover, the tendency for Europeans to overlook or underestimate the positive role that checks and balances can play against the potentially authoritarian tendencies of a democratically elected executive, should be taken as an incentive: to talk more, and more persistently about the crucial importance of checks and balances and the rule of law in Europe itself. Because in politics, for every ugly American, there are three ugly Europeans, ranging from Nigel Farage to Jarosław Kaczyński to Marine Le Pen, with a bunch of ‘centre right’ and socialist leaders in between.

All these ladies and gentlemen feel uncomfortable with an independent judiciary, free and critical media, an impartial public service and strong and vibrant civil society. Many of them believe that once their government has been democratically elected, checks and balances only help the rich, the strong, the old elites or some strange minorities to continue to ‘impose their will’ upon the hard-working, God-fearing, tax-paying majorities. In other words, strengthening European discourse about making democracy safer against threats from within would be one healthy reaction to the – hopefully hypothetical – prospect of a Trump presidency.

The other one would be for Europe to get its act together – a tall order, admittedly, looking at the unprecedented mess we are facing at the moment. But we should never tire of trying to find the right mixture of subsidiarity (and that can mean devolution, in some cases) and united strength that will be required if we don’t want to give America’s new isolationists (and of these, there are far more than just one Donald Trump) an excuse to withdraw from the Transatlantic alliance.