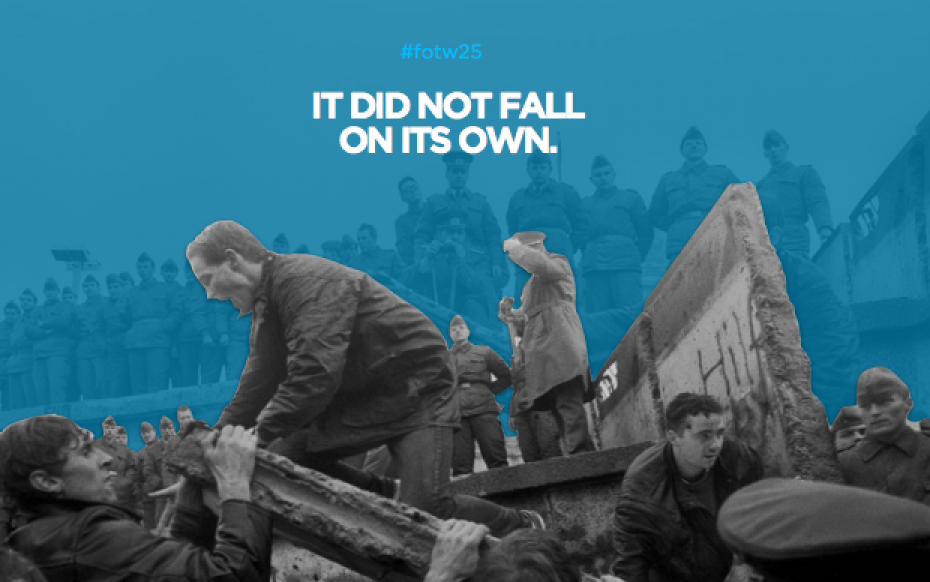 25 years after the fall of the Berlin Wall, for most Europeans, personal reminiscences mingle with historical reflections and a certain idea of an uncertain future. The opening of the border between East and West Berlin on the evening of 9 November, 1989, not only opened the road to the unification of Germany. It also brought European communism to an end, the classical East-West confrontation (a.k.a. Cold War) to a close, and it paved the way to a ‘Europe Whole and Free’, in the words of the then U.S. President George H. W. Bush.

In the midst of so many comments and observations about that magic year, here are three simple insights:

First, the Wall was brought down by the people, not by Mikhail Gorbachev. The revolution of 1989 was, first and foremost, not made by somehow enlightened communist first secretaries that had suddenly come to their senses, or fallen in love with free elections. The Wall came down because the people had had enough of it, and were willing to risk everything, even their lives, in order to change their political system. That was also because a functioning alternative, Western Europe’s liberal democracy, was there. And it was because there were leaders in the West that were alert and determined enough to help the freedom movements in the East at the right time: Helmut Kohl, Margaret Thatcher, Ronald Reagan and George Bush senior. The reason why most party leaders of the Warsaw Pact and their henchmen in army and secret police did not use force, was that they did not believe force would ultimately be able to save communism. But saving communism was still their project – from Warsaw to Moscow via East Berlin, different speeds notwithstanding, they all tried an organised retreat, step by step, until it was too late for them to keep the Wall standing.

Second, the fall of the Wall was a great moment in time. On the backdrop of what came before, but also what we seem to go through today, 1989 and the decade that followed were a time of universal human progress. Democratic revolutions were achieved almost bloodlessly, and the transformation to the rule of law, democracy and the market economy in Central Europe was a huge success, compared to any other attempt made elsewhere since then. Economic, political and cultural globalisation received a huge boost in the two decades after 1989, thanks to that. Even Western economies felt a need to reform and become more globally competitive as a consequence. The Eastern enlargement of the two decisive Euroatlantic institutions, NATO and the EU, was another achievement. But maybe even more importantly, democratic capitalism spread globally. Political and economic freedom, and the idea that they are deeply interlinked, made dictators recede and emboldened democrats in Latin America, Africa and Asia as well.

But, third, the end of the Wall was not the end of history. Liberal democracy and democratic capitalism, 25 years after 1989, seem in retreat. The Slovene neo-Marxist Slavoj Žižek recently said that global democracy was shaken by 9/11, and global capitalism took a hit in the economic and financial crisis since 2008. China seems to prove every day that economic prosperity and impressive growth figures are possible without political freedom – and that authoritarian systems may even be better for the economy than multi-party democracy. From Vladimir Putin to the jihadists of Islamic State, the rejection of ‘Western decadence’, and a broad refusal to take any ‘lessons’ anymore, seem to be gaining ground. But it would be very short-sighted to believe that the West is finished. Authoritarian systems, and illiberal democracies without proper checks and balances, feel much less secure than they like to pretend. Witness the intensifying crackdowns on internet freedom in China, Russia and other countries, even Turkey. And note that from Kiev’s Euromaidan to Hong Kong’s ‘Occupy Central’, the people refuse to believe that multi-party democracy is not good for them.

Remembering 1989 makes sense only if we seriously try to define what that year means for our future in the 21st century. Liberal democracy has taken many more hits in the last 25 years than we hoped in those crazy days of November. But as much as the triumphalism of the 1990s may have been exaggerated, the belief in the decline of the West of recent years has been an error at least as dangerous. It will not stand the test of time. Many walls are still standing around the globe, and some have been freshly put up. It is the mission of the EPP political family to help the people bring them down, and replace them with a more durable order based on political and economic freedom. As former Georgian President Mikheil Saakashvili said in 2013, history may not have ended in 1989, but freedom remains its motor and its horizon.