Give me a like, not a duty! Reflections on postmodern freedom 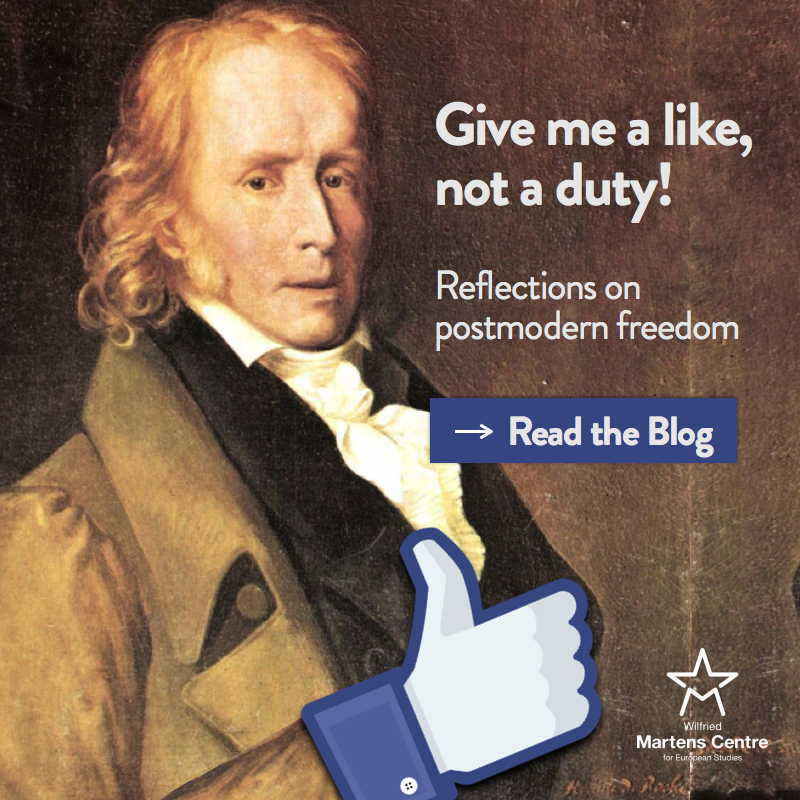 In 1819 the French intellectual Benjamin Constant pronounced his famous speech on ‘The liberty of the ancients compared with that of the moderns’. He argued that ancient men had no freedom as individuals, but only as members of the body politic. On the contrary, modern men living under representative government had limited political sovereignty, but many more individual freedoms.

His speech hinted at a profound difference between the ancients and the moderns. But what would he say if he could observe western societies now, after almost two centuries during which the liberty of the moderns revealed all its potential?

At the time of Constant’s writing, personal freedom was embedded in an intricate structure of family, community and church ties that mitigated it with ‘natural’ duties towards one’s elderlies, relatives, children, neighbours and ancestors. In a word, one’s community. These duties were not enforced by the external coercion of the law, but by the inner force of moral upbringing and by the external force of social conformity.

As a result, the freedom of the moderns was not exactly equivalent to the liberal principle of non-interference: it flourished within a complex ecosystem of moral obligations towards specific people; it was therefore as much about our negative obligations not to interfere with other people’s lives as about our positive duties towards them, which often compel us to restrain our natural desires and leanings for a higher good.

Under this conception, the emphasis was on self-mastery, moral discipline and social duties, not on leaving other people alone. In the Anglo-Saxon conservative tradition, this concept is referred to as ‘ordered freedom’, but it existed, with slightly different variants, in pretty much all traditional societies across the Western world, and it owed much to Christian moral teachings.

On the contrary, the contemporary conception of freedom tolerates little in the form of specific duties towards specific people. It tends to replace them with abstract duties towards abstract entities that do not require our direct effort as individuals but require us to call on politicians and bureaucrats to do something about it, to plan things better at the highest possible level, often the world level. That’s one root of the modern obsession with global poverty, while charity at home stagnates or is comfortably delegated to inefficient welfare bureaucracies, or with the environment and global warming.

The fashionable moral causes of our age have all in common that we do not have to take direct responsibility for their solution, our moral obligation is discharged by the mere preaching and campaigning. They are the kind of causes you can comfortably support from your sofa, writing tweets full of moral indignation during the break of the movie you are watching, and getting plenty of likes on them.

Thus, in a strange twist of western values, what progressives usually consider supreme ‘moral engagements’ are in fact the end point of a complex process of moral irresponsibility. This process, in turn, finds one of its causes in our dis-embeddedness from the organic communities that were the traditional ecosystem of individual morality across the western world.

There is perhaps something we can do to revive this ecosystem in the 21st century, but it may require measures that many would consider too far-reaching. They imply a progressive but radical reversal of the 20th century trend that saw more and more personal and social responsibilities taken away from individuals and voluntary organisations and handed over to state bureaucracies.

Societies are complex, adaptive structures, and there is no doubt that their resilience and resourcefulness have been hugely damaged by over a century of servitude to the state. The disease is chronic in  the old Europe, where the march towards centralisation was most radical and people have become accustomed to believe that, far from being themselves ‘society’, they have a claim on ‘society’ – to be enforced by the State – for all sorts of things that morally responsible individuals used to see as their main duties in life: providing for themselves and their families, educating their children, taking care of their elderlies, saving for their old age and, very importantly, getting organised to support the neediest in their community through charities and churches.

I would not be surprised if, in the political conditions of the coming decades, there arose a great scope for a virtuous revision of the tasks of government in order to de-bureaucratese our systems and reintroduce choice and ownership at the individual, family and community level. The concrete ways to do so will have to be studied in details.

But there certainly are interesting possibilities, such as the rigorous application of voucher systems in health and education, which would re-empower parents, private organisations and churches in educational choices as well as in the direct management of schools. Home schooling could also be encouraged under certain conditions.

The progressive withdrawal of the state from the universal provision of social security (most notably pensions) should also be envisaged. People could be gradually re-empowered to keep more of their incomes and save for themselves and their families privately and freely, with the state stepping in only in extreme circumstances of need. In a nutshell, people could be encouraged to re-take control of their lives as responsible moral beings with specific social duties that cannot be delegated or outsourced because they are the essence of community life.

A strong intellectual commitment to shifting public opinions on these issues will surely be needed. But I believe we can convince people that this societal model is the healthiest, as it is based on the principles of freedom and genuine moral responsibility, not on the realities of bureaucratic coercion and that grotesque caricature of moral solidarity that is the modern welfare state.

These developments would no doubt be very challenging. But in times of economic stagnation, overblown public debts and social disintegration we may soon come to regard them as ultimately beneficial. It is not implausible that even Benjamin Constant would give us a like on this.