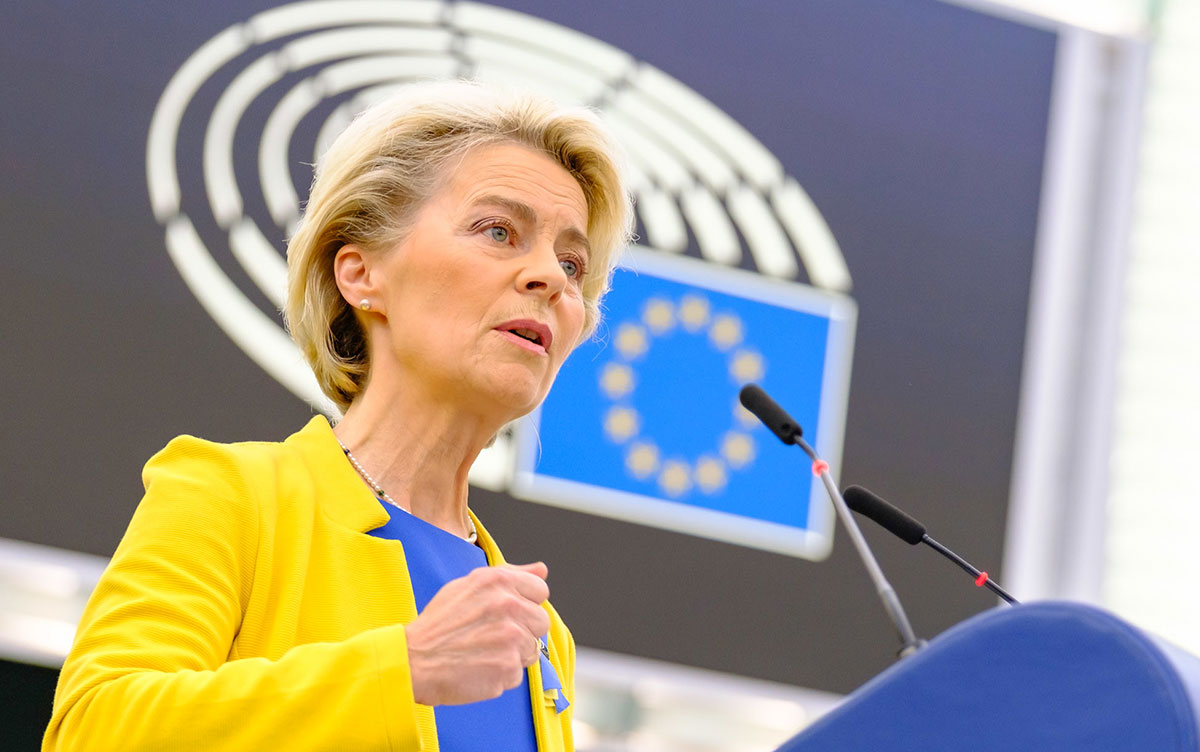 War is raging on the European continent. As a result, President Ursula von der Leyen’s State of the Union speech of 2022 did not follow the typical script of previous addresses. It was not a follow up to the points emphasised by the Commission at the beginning of von der Leyen’s term, and perhaps cleverly so.

The COVID-19 pandemic, but much more so the war in Ukraine, have changed the EU’s role both regionally and globally. The State of the Union speech was an opportunity to run through Europe’s war-related efforts and re-state the bloc’s support to Ukraine. In the presence of Olena Zelenska, First Lady of Ukraine, in Strasbourg and against the backdrop of recent Ukrainian military successes, President von der Leyen had the tools she needed to give a passionate opening to her speech.

The speech then continued with Ukraine-related topics. Though sustainability was underlined often and a proposal for a hydrogen bank was declared, contrary to previous speeches, the Commission Green Deal was not the speech’s red line. This was likely a good choice, given the ongoing sensitive debate on how to rebalance the Commission’s ambitious green transition goals with the current energy crisis, a crisis which no doubt is the priority for Europeans.

Although Ukraine was mentioned various times, Ukrainian EU membership status was not. President von der Leyen made specific remarks about aiming to bring Ukraine closer to the Single Market and her own negotiations in Kyiv on further cooperation. These reflect the opinion shared by many that while EU candidate status has been granted, in reality focusing on immediate, concrete steps for integration rather than on the membership process itself will yield better results.

The State of the Union speech often lists various proposals by the Commission, always with impressive titles but often left wanting in terms of content. Sometimes, those proposals move forward and become a core of the Commission’s policy proposals and EU agenda; other times little happens. Who can recall the “Global Gateway strategy” from last year’s State of the Union speech, for example? While the President referred to it again in her speech, the ambitious proposal from last year has remained limited within the EU toolbox.

The President proposed the Defence of Democracy Act. The plan, she said, would aim to uncover covert foreign influence and shady funding. This plan will no doubt receive support from EU member states, but can quickly become politically sensitive, depending on how it is implemented and by whom.

French President Macron’s proposal on a political community received President von der Leyen’s endorsement. Was this a polite gesture for the French or something more substantive? Despite some draft papers circulating EU corridors, the discussion on a political community has not truly taken off at a higher level. Since Ukraine obtained its candidate status with the support of many EU member states, it is highly unlikely that a substantive discussion on the community’s basic modalities will begin in earnest anytime soon.

But of course, should such a thing happen, most likely an EU Convention of some kind would be needed. The President’s request for the EU convention to begin was received by the European Parliament with enthusiasm. However, those EU member states bearing the brunt of the current extraordinary crisis, will most likely be less enthusiastic. Other touchy topics for the future are the proposals for new fiscal rules. Even if the current rules do not correspond to the current reality, the discussion will be heated between EU member states; and it seems even within the Commission, the vision is not united.

President Ursula von der Leyen finished by referring to the importance of standing strong with the US and on China, with a clear and welcome message. This ending closed the rhetorical circle, which began with the war in Ukraine and ended with the EU’s position globally.

Between last year’s State of the Union speech and this year’s, there is an obvious difference. While a year ago, the EU was aspiring to have a global role and weight, it has obtained some of that through the war in Ukraine. The EU has played an important, even unexpected role, and has been able to break some of the taboos which hindered it previously.

It is a promising start, and the President’s speech played on it. Building on the war in Ukraine and the EU’s role offered the President a possibility which was used. The speech had a more solid structure and was less of a patchwork of different topics and proposals, which it previously was on occasion. And of course, no State of the Union speech would be a true EU SOTU without a human story, which were plenty also this year, from First Lady Zelenska’s visit to the story of two Polish women helping Ukrainian refugees. The latter was also an interesting choice; perhaps a small gesture towards Poland in the sensitive rule of law debate?