25 years of Spitzenkandidaten: what does the future hold? 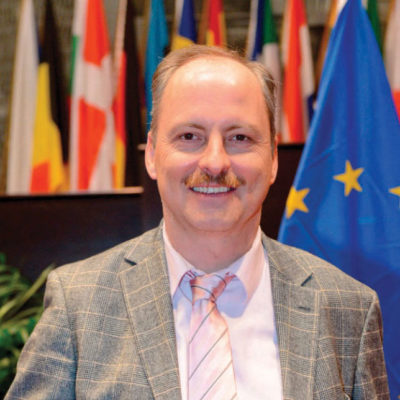 Last time when the Spitzenkandidaten succeeded, many people believed that it was a kind of miracle. But of course we know that miracles are normally relatively rare and even in the Catholic church, before they decide that something was a miracle they have some expert groups or scientific advice.

It takes a year, sometimes it takes decades, sometimes it takes centuries. So we should not be too quick to assume that it was a miracle. I rather believe that there were some objective preconditions, but also some subjective preconditions for that success. And I think that it is useful to  remember them also in view of where we are right now for the 2019 European elections.

The objective preconditions were that the Treaty had been changed in three critical parts. First, it asked the European Council to make a proposal taking into account the outcome of the European Elections. Secondly, the European Council was requested, before it made that proposal, to consult with Parliament to see which candidate would have the chance of a qualified majority.

I think objectively there was also a special situation because there was a higher need for legitimacy. Remember the 2008 financial crisis. We said 2008, but in fact it was not limited to a year, it was a long stretched-out process. In the course of that crisis, the EU needed to take a lot of decisions which sometimes were perceived as extremely tough by citizens.

Think about Greece, think later about Cyprus, think about some other countries. Objectively the need to improve the degree of legitimation in the system had become higher. People wanted to know that they had a say on somebody who can impose those kind of decisions. Also objectively, I think the Parliament decided early to invest.

We took a high risk, because if it had gone wrong, people would have said “they are stupid, they did not understand, they could have known in advance”.  But if successful, the positive outcome for democracy in the European Union would be strong and that is what we went for.

It has been said already that this success was not a foregone conclusion, but the degree to  which  there  was  doubt  in  the  system  nevertheless  should  be  remembered.  It  was regarded as so unlikely that ambassadors decided collectively to remain deeply asleep. Because it would not happen anyhow. So no need to alert capitals. It would not happen. The general disbelief was enormous.

I was invited to numerous discussion fora to present, and normally the outcome was “very interesting idea, of course it’s not going to happen”. There was a sense of general disbelief that this could ever come into being. But it’s equally true that there is also no guarantee today. Therefore, I would like to mention the critical informal preconditions of success 2014 we have to be aware of.

Nobody  around the table had so many years in the European  Council.  Before he was Minister for Finances and Minister for Labour and probably Minister for half of the other cabinet posts in Luxembourg as well. Nobody was so much a Council insider and the principle they had applied after Jacques Delors, that it should be one of us, was respected with the nomination of Jean-Claude Juncker.

The candidate’s, the successful candidate’s cross-party appeal was very strong. If I read it correctly in the newspapers, Juncker is saying from time to time “I’m a Christian Social Democrat”. So if I were to be a Social Democrat that would be a message which would not make me very unhappy.

Thirdly, the core groups in the Parliament were absolutely united in this institutional battle. And fourth point, some of the key actors concentrated the decision making power in the final phase which made coordination needs much less heavy. Martin Schulz was Group President and lead candidate and outgoing President of the European Parliament. Joseph Daul  was  outgoing  Group  President  and  EPP President.

Which  means  that Joseph  Daul  had  to  coordinate  with  himself  and  Martin  Schulz  had  to  coordinate  with himself and then they had to coordinate with each other. It is a slight simplification, but not too much. Of course coordination among themselves was not so difficult because that is exactly what they had been doing the last five years. So that means the decision making process in the critical phase could be based on trust and could be based on concentration of key decision making functions.

The fifth point was that there was already the spirit, others would say the demon, of the big coalition in the room. I would have said the spirit, but others maybe would have had a less positive view of this. So there was this idea of a big coalition in the room. I strongly believe that these were five informal preconditions, subjective preconditions which made success in 2014 not only more likely, but in the end, possible.

None of those informal preconditions exist anymore. None of the candidates is former Prime Minister or Head of State and  Government.  It’s true that some had government responsibility, but nobody has been a member of the European Council. This time we are asking from the European Council to abandon the principle of “one of us” which they have insisted on ever since Jacques Delors left.

Secondly, these are all very strong candidates, but on the EPP side there is no candidate who is saying “I’m a Christian Social Democrat”. Of course he is coming from the Christian Social  Union  –  so  that’s  getting  close,  right?  –  These  are  normal  candidates  from  their parties, but whether they have specific cross-party appeal remains to be seen, but I would dare to say not to the degree of Jean-Claude Juncker.

Thirdly, we have a kind of question mark in the liberal family behind the concept, where Macron has insisted that he would not join anything or anybody or support anybody who has  been  in  favour  of  the  lead  candidates.  We  can  clearly  see  that  the  posts  of responsibilities  are  more  divided  between  different  persons.  So  that  means  after  the elections and already before the elections, but especially in the crucial hours and days after the election, the need for coordination between different and independent actors will be much higher.

And five, the big coalition is broken. We do not have a big coalition. We could see that already at half-term there was no longer an alliance to elect the President of the European Parliament.  So  those  five  elements,  informal  preconditions  for  success,  which  made  it easier last time, will not be available this time. If it is to be successful the core forces will have to come together very quickly.

On the other hand, there are positive elements for the Spitzenkandidaten which were not present last time. First, I think we have learned in the meantime that there is strong public support for the fact that citizens should have a say in who is running the executive. That was one of the key learning points last time round. When some of the Prime Ministers were wavering, the reaction they got, especially from the press, was extremely harsh. So they have learned, that this does not come cost free, but that it has a political price.

Secondly,  we  know  from  the  last  election  that  the  Spitzenkandidaten  system  has  the potential to increase participation in elections for at least about 12%. We know that last time in the countries where the Spitzenkandidaten were the most present, in after-election opinion polling 12% of the voters said they voted because of the Spitzenkandidat. If you take for example Germany where they were very active, we had a participation rate which was clearly going up, the same for Austria, the same for Luxembourg. So the potential is there.

Third, we had and we will have an even stronger media engagement which will also restrain politically afterwards. Forth, we have a much longer campaign, we have a better financed campaign, we have a better organised campaign. Last time Jean-Claude Juncker came to his position a little bit to his own surprise, very last minute. Nowadays all the political parties are planning this for  months,  conducting  their  campaigns  for  months,  are  present  all  over  Europe  for months. The outreach this campaign is having is much bigger and more important.

And fifth, all the Prime Ministers this time have been very solidly involved in the selection process of their candidates. None of them can say he didn’t know, he was not consulted, he is not in agreement.

We are expecting a Parliament which will be more divided because of developments in national party systems. This also means that the potentially available majority to carry a candidate will be smaller than last time. If that majority is smaller, it also means that the space for the European Council to disregard the Spitzenkandidaten is shrinking massively.

Because if only you lose one of the three major groups, or if only you lose an important part  of  one  of  the  three  major  groups,  you  are  losing  any  potential  majority  for  a Spitzenkandidat in that system. Therefore, the European Council will also have to realise that in fact its own choice is limited.

There are many definitions of democracy. I like the one which is “democracy is if you can change your government without bloodshed”. I know it is a very basic definition, but it is important and until very recently, there were some question marks whether as a citizen in Europe you could change your executive without bloodshed.

How should you do that? You were not asked that question. You were just asked the question to elect members of Parliament.  So  with  the  Spitzenkandidaten,  under  the  existing  Treaties,  we  have established a clear relationship between citizens, parliamentary majority and the head of the executive. I think, and I fear, that for quite some time we will have to work with the existing Treaty, small changes here or there not to be excluded.

Which means that  our systematic approach has to be to maximise the unused potential under the Treaty. The Spitzenkandidaten is the prime example how this can be a very successful strategy, changing the constitutional nature of the EU.

Speech delivered at the Martens Centre event “25 Years of Spitzenkandidaten: What does the Future hold?”, Brussels, 5 March 2019