From Disapproval to Change? Russia’s Population May Surprise Putin at the Next Elections

Most of the recent commentary around Russian politics has been focused largely on one issue, the high personal approval ratings of Vladimir Putin. But the Russian political system is complicated, and even the ruling force consists of many elements: government, the ruling ‘United Russia’ party, Parliament, regional governors, and so forth.

There are strong indications that, despite Putin’s personal approval rating remaining quite high, approval ratings for all other elements of the system of power are essentially down to pre–Crimea annexation levels and even lower. There are strong and growing signs that the Russian population is deeply unhappy with the current situation, and that discontent has a chance to spill over into the territory of political consequences.

Despite the fact that Putin’s overall hold on the country remains largely unchallenged, authorities run a very serious risk of showing weak results at the upcoming Parliamentary elections in September 2016. The weak result of the ruling party at the previous State Duma elections in 2011 sparked a large-scale political crisis in the country, although the party did not even lose a majority in Parliament.

It is too early to predict specific results of the September 2016 Parliamentary elections, but the weaker the result for United Russia, the more reason to expect some modification of the current system towards power-sharing deals, softening of the ‘vertical of power’, emergence of a more dialogue-based environment and calls for some kind of transformation of the Russian political system. 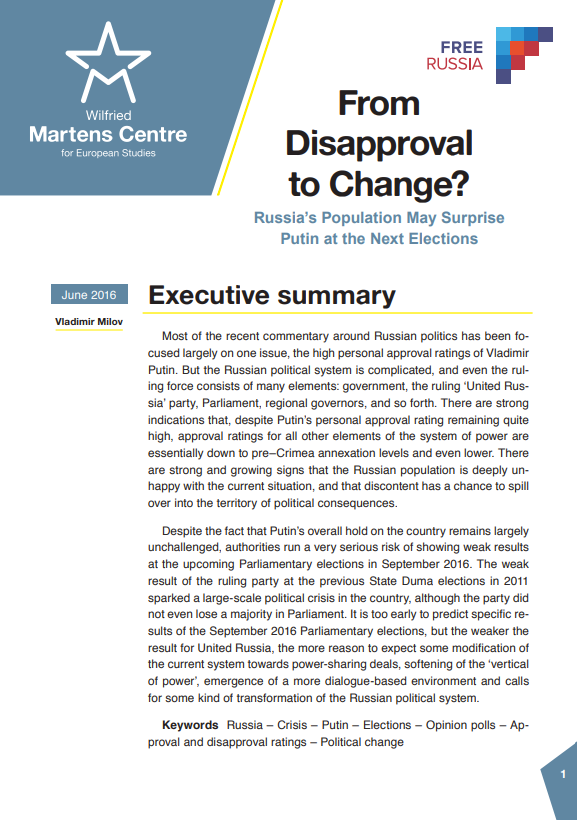