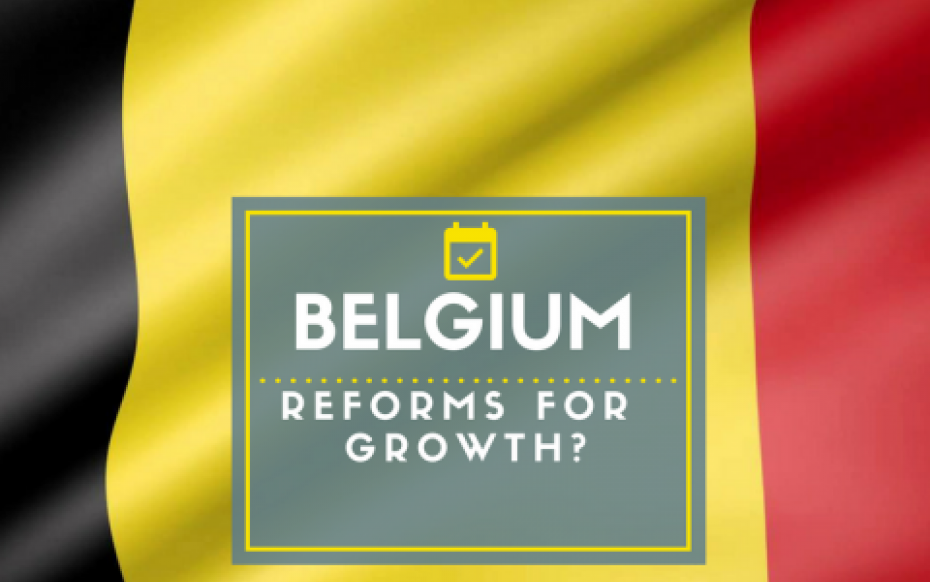 With economic growth not expected to exceed 1.6% up to 2017, a debt to GDP ratio predicted to peak at 106% in 2016, coupled with established labour market challenges, the country remains extremely susceptible to further economic external shocks. This event on 12 October 2016, entitled ‘Belgium: Reforms for Growth?’, was part of a common project with the Wilfried Martens Centre for European Studies and CEDER, aimed at discussing the current state of Belgium’s economy.

Following attempts to adhere the Commission’s three overarching recommendations relating to fiscal reform, labour market reform and competitiveness, Javier Yaniz Igal of DG ECFIN noted that there is now a risk of significant deviation from the adjustment for 2016’s and 2017’s forecast. Belgium’s tax shift, which Javier emphasised is progressing in the right direction, does not appear to be neutral, further illustrating that there is still considerable scope for improving the designs of the overall tax system.

Although some improvements have been made in the overall functioning of Belgium’s labour market, said Javier, underutilisation of labour – especially among low-skilled, young and older works and people of migrant backgrounds – continues to undermine the economy. Further measures are therefore needed to ensure compliance; to meet the recommended targets and to get Belgium’s economy back on track.

Department of Economics Professor of the University of Ghent, Koen Schoors, suggested that in order to understand Belgium’s economy, we need to understand how exactly we ended up here. Globalisation has been mismanaged on a global scale, resulting in significant income disparity not only in Belgium, but across Europe and the rest of the world, including the UK, Spain and Germany.

Koen agreed with Javier that the tax shift being implemented in Belgium is indeed essential, particularly away from labour and instead on consumption, waste and sugar, etc. as well as capital – which is not being taxed enough, or in some cases at all.

Ultimately, what is needed for Belgium is a long-term plan, he proposed; a roadmap, with all stakeholders, in order to create incentives and improve competitiveness. Failure to do so will almost certainly result in the killing of investments and prolonged stagnation of the economy.

The political perspective offered by Belgian Member of European Parliament Tom Vandenkendelaere presented Belgium as an exceptional case, encompassed by the slogan ‘only in Belgium’. Regional disparities and a high level of government instability culminate in a very unique political landscape, he said, something which needs to be addressed in order to improve the confidence of Belgians, expats, investors and entrepreneurs.

According to Tom, economically Belgium is not doing explicitly bad, referring to the implementation of the Commission’s recommendations on fiscal reform, Belgium’s labour market and chronic stagnation. However, he acknowledged that Belgium frequently faces challenges which need to be addressed, including areas like retail liberalisation, as well as government communication and crisis response, with the latter two being highlighted by the 22 March 2016 attacks in Brussels.

What is needed for Belgium is a roadmap on how to improve coordination, competitiveness and encourage investment. MEP Tom Vandenkendelaere

Agreeing with Koen, Tom stressed that what is needed for Belgium is a roadmap on how to improve coordination, competitiveness and encourage investment, adding that investing in education is also essential in order to sow the seeds for future generations. Most of all, Tom advised, what we need in Belgium is to foster trust.

During the Q&A session several particularly pertinent issues were raised, most notably on how to better regulate/deregulate the various Belgian sectors, how to reduce the constraint of Belgian banks and finally, what can be done to improve the investment environment of Belgium and its and overall competitiveness.

The panellists were in agreement that a long-term roadmap which responded to such queries, capitalised on Belgium’s strengths while addressing its weaknesses, was indeed the best method moving forward. They concluded that government stability was also imperative for delivering and following through on that roadmap.