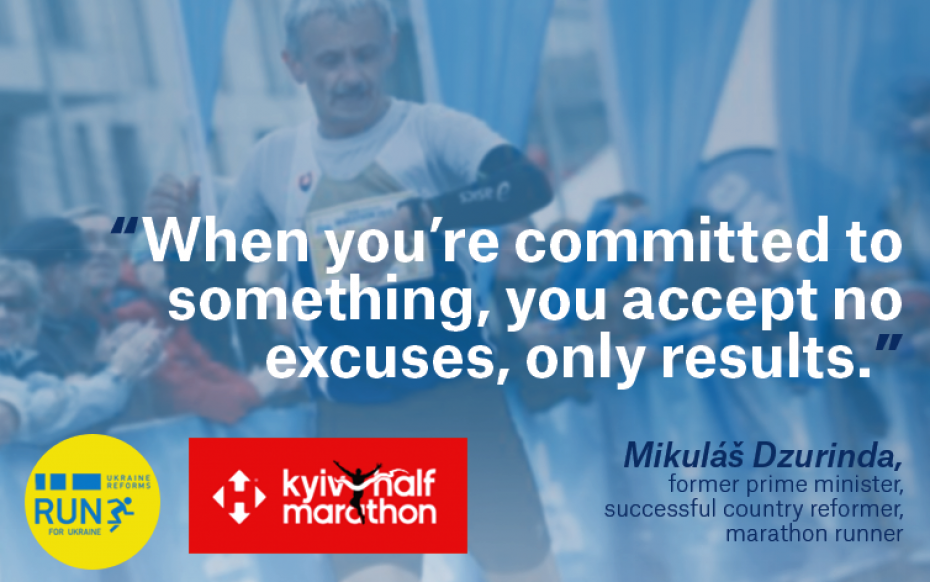 On 26 April 2015, former prime minister of Slovakia Mikuláš Dzurinda will be taking part in the Kyiv Half Marathon. He will be leading a team of runners including members of the European Parliament Dita Charanzova (Czech Republic), Ivan Štefanec (Slovakia) and Roman Babjak, European Commission Programme Manager. Under the slogan ‘Run for Ukraine’, the team led by Mikuláš Dzurinda wants to send a clear signal that responsible European leaders have a moral obligation to show solidarity with Ukraine during the comprehensive reform process the country has embarked on.

‘This is a deeply symbolic act to show our support and solidarity with the Ukrainian people. I see many similarities between running a marathon and implementing reforms: both require long-term commitment, they can be painful at times, but nothing compares to the rewarding feeling of crossing the finish line. And they both require team effort’, said Mikuláš Dzurinda, who is currently President of think tank and political foundation Wilfried Martens Centre for European Studies, based in Brussels.

‘Run for Ukraine’ is part of the ‘Ukraine Reforms’ campaign, an initiative of the Martens Centre led by its President Mikuláš Dzurinda to bring together  the expertise of senior EU decision makers in support of the reform process in Ukraine. The initiative is supported by local partners including Ukrainian NGOs Reanimation Package for Reforms and Center UA, as well as the Kiev School of Economics.

The Kyiv Half Marathon is an annual international sports event which aims to promote a healthy lifestyle and to consolidate Ukraine’s position on the international marathon circuit. For the 2015 edition, organisers are expecting more than 6,000 participants to tackle the 20km run.

Mikuláš Dzurinda is the former prime minister of Slovakia (1998-2006) and current President of the Wilfried Martens Centre for European Studies. Previously, he has held various positions in government since first entering politics in 1990. Dzurinda introduced far-reaching reforms which have enabled Slovakia to successfully join the EU and NATO. In his free time, he is also a committed marathon runner with notable achievements. In November 2001 he took part in the famous New York Marathon to show solidarity with the American people following the 9/11 terrorist attacks.