Can the Conference on the Future of Europe Deliver Results? Episode 2 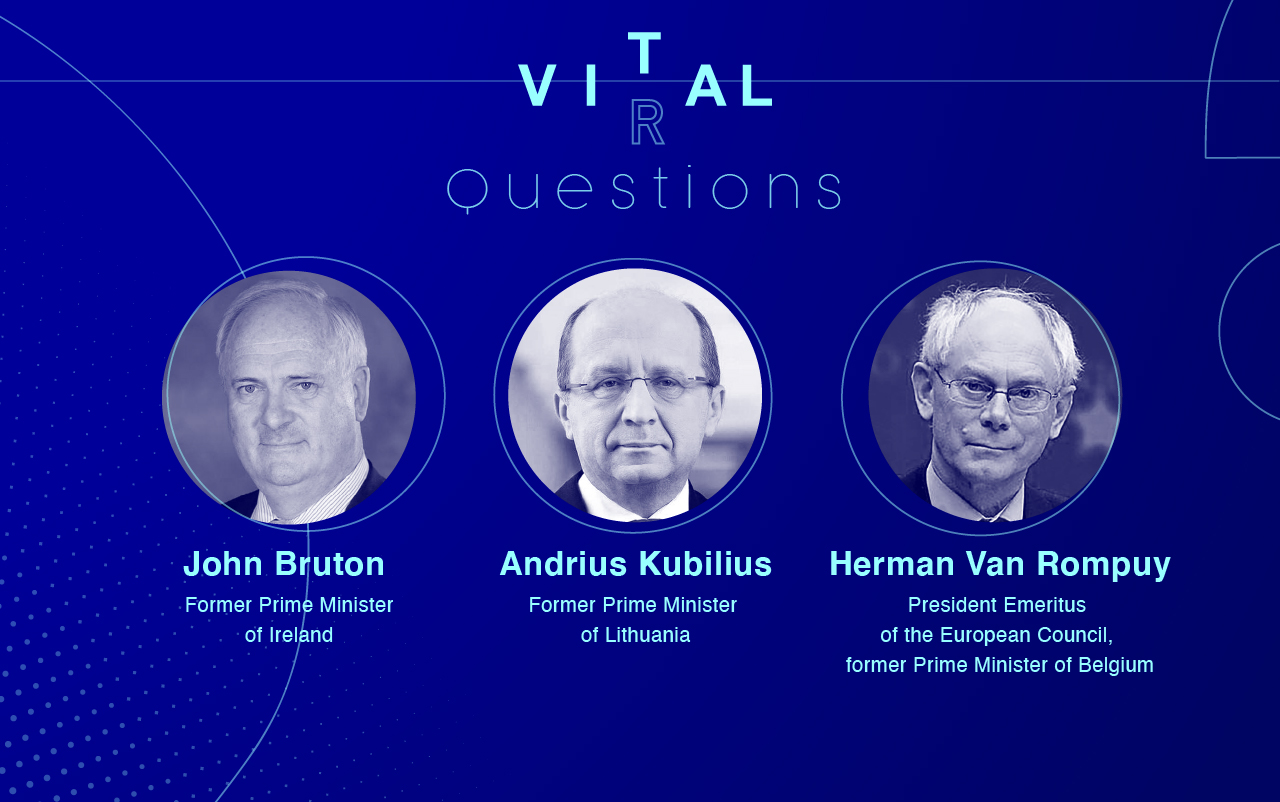 1.       The Conference on the Future of Europe (CoFoE) is expected to envision Europe’s future on a 20 to 30-year horizon. The years of various crises and the ongoing pandemic have shown that we need a more effective and rules-based European Union. Could this Conference deliver effective results, extending beyond its mere intentions?

John Bruton, former Prime Minister of Ireland: The attempt to envision Europe’s future over such a long timeframe is very ambitious. The Conference will presumably draw on published materials and discuss the political consequences of the projections. This will be a useful exercise in public education, but it is unlikely that the Conference, given its diversity, will be able to agree on anything concrete.

It is important to develop a sense of European or EU patriotism, or loyalty to the ideals that underlie the EU idea. Democratic participation is the best way to build such loyalty. I hope the Conference can do this.

I have some doubts about how the Conference might develop, based on my experience of the Convention on the Future of Europe. There, the priorities of the organised participants were the enhancement of the relative power of their particular institution within the EU structure, rather than the enhancement of EU-wide democracy as such.

For example, the idea of the direct election by the people of the Commission President, although mentioned in the mandate of the Convention, got little or no serious consideration. I assume that this was because a directly elected President would have diminished the relative power of the European Council and the European Parliament. The idea of an EU-wide election of some MEPs was not considered at all.

Andrius Kubilius, former Prime Minister of Lithuania: The EU is a very specific and very successful organisation, which grows, develops, and becomes increasingly consolidated as it moves from one crisis to another, starting from its earliest stage, the Rome Treaty. “Europe will be forged in crises” was a prediction by Jean Monnet, one of the European Union’s founding fathers, “and will be the sum of the solutions adopted for those crises.” The global financial crisis of 2008-2012 pushed the EU to create a real banking union, the refugee crisis of 2015 inspired the creation of Frontex, the COVID-19 pandemic and economic fallout resulted in the unique financial instrument of the Recovery Fund, with new instruments for “mutual EU debt”.

It is impossible to predict what kind of new crises the EU will face in the coming decades, but the EU should not be afraid to meet all those new challenges. The EU should not be afraid either to come out from each crisis having become more consolidated and more “federal”. This is a natural way of EU development and the Conference on the Future of Europe should praise such a perspective.

The Conference on the Future of Europe should provide the answer to the biggest challenge of the future: how to prepare the EU for the next potential enlargement, since enlargement is the most important strategy to maintain peace and stability on the European continent. For that reason, there is a clear need for a structural change of decision-making procedures, moving onto a more democratic path, based on a majority voting principle.

Herman Van Rompuy, President Emeritus of the European Council, former Prime Minister of Belgium:  The Conference started in great ambiguity, both in terms of its leadership and its purpose. It should avoid solely listening to citizens’ concerns and questions. That is certainly necessary, but at the same time, it must also provide leadership regarding the substantive direction that the Union must take in the coming decades. A combination of bottom-up and top-down, of politics and policies. What are our priorities? The pandemic has taught us to cast taboos aside, such as the purely budgetary obsession, to see public goods like health, climate, and education as indispensable, to avoid Europe being too dependent on foreign countries and foreign companies in many areas, including the digital world. In all these areas, ‘more Europe’ is needed, not less. The pandemic is a wake-up call.

2.       The audit of the functioning of the Union and the future of Europe is in the hands of EU citizens. They consider democracy, human rights, rule of law, but also the Union’s economic power as the greatest benefits of the EU, according to the latest Eurobarometer survey. Are these benefits sufficiently protected and resilient?

John Bruton: The issues around rule of law and democracy in Poland and Hungary are unresolved, so the answer to this question, at this stage, has to be “no”. Unfortunately, citizens are not always wise in their choices and can elect people who are not truly democratic. The basic test here is willingness to accept defeat when one has lost an election. Rule of law is fundamental; without it there can be no democracy. It requires an independent and brave judiciary. “Human rights”, on the other hand, mean different things to different people.

For example, is there an agreed definition of the term “human”?  Is a living baby, as yet unborn, “human”? And if so, does it have a right to life, and if not, how would one describe it and does it have any rights of its own?

Does the existence of human rights imply concomitant human responsibilities, and if so what are they? Against whom should human rights be exercisable? The state? One’s family? The European Union? These are profound philosophical questions. I hope the Conference will address them honestly and humbly, because there are no easy answers.

Andrius Kubilius: Democracy is facing two major challenges, both globally and within the EU: the first is erosion of democracy by populism in established democracies; the other is tectonic shifts inside the fundaments of a traditional democracy. Shifts are taking place in a modern post-industrial society, which is distinctly different from an industrial society when the rules of “traditional democracy” were established. Those two challenges are common for democracies on both sides of the Atlantic, in the “old Europe” and in the “new Europe”. On top of that, there is also a clear external global challenge: democracies need to prove that they are more effective than autocracies such as China, Russia, Belarus, or Iran.

Democracy in the 21st century will need to “reinvent itself”, and the EU needs to be ready for this exercise. The EU can become more democratic if the decision-making process of EU institutions will become more democratic, more transparent, and more understandable. This can be achieved only with an evolutional shift towards a traditional “majority voting” in the decision-making system of the EU.

Also, trust towards the EU is suffering. This happens because of the widening gap between peoples’ expectations from the EU and the very small resources that the EU possesses in order to deliver on these expectations. The Conference on the Future of Europe needs to agree on a 2% of GDP EU budget, instead of the current 1%. For EU Member States, their European financial obligations should be no less important than the obligations to NATO financial standards. The Recovery Fund is a good first step in that direction.

Herman Van Rompuy: Many citizens feel inadequately protected by leaders active on all levels of governance, against all sorts of threats. They feel insufficiently protected against unemployment, employment precarity, irregular migration, climate change, terrorism, inequalities, corruption, pandemics, foreign invasions, fraud, financial instability, cyber-attacks, and more. Simultaneously, many are not sufficiently empowered to survive in a harsh, competitive world. Education is one means to palliate this. The EU must contribute to this protection within its current and future competences. Citizens demand results from policies. They want a democracy that delivers. At the same time, they want more control over the very distant European decision-making process. Citizens are alienated from policymakers at all levels of government, including the European level.  How to get citizens more involved with more impact and more grip?  If there is too little pressure from below, the bureaucratic, party-political, or institutional logic (the rivalry between Commission, Council, and Parliament) prevails. How to make all this concrete? That is what the Conference should be about.

3.       Could you, as an EU citizen, share your biggest concern and biggest dream when it comes to the future of Europe? What would be your advice to overcome such a concern and, on the other hand, how to achieve such a dream?

John Bruton: Generally, I believe we make progress by small steps. Big dreams are to be avoided because they can often be a prelude to totalitarianism or populism.

My biggest concern is the preservation of peace in Europe and the world. The institutions that help us preserve relative peace in our time are inherently fragile, and contingent on prudent leadership based on popular consent. This work will never end.

Andrius Kubilius: My biggest concern is very simple – after 76 years of peace on the European continent, how long can this peace be sustained for? The EU was created as a project that enables peace in “old Europe”, stabilises democracies, and enlarges the area of that democratic stability. NATO was established as a project that defends the peace. Both those mega-projects where the products of visionary transatlantic leaders. And both projects were very successful in bringing and maintaining peace on the European continent.

The only real threat to peace on the European continent comes from the authoritarian regime in Moscow. The only way to get rid of that threat is to assist the Russian people in their efforts to transform their country into a European-style democracy. Democracies are not fighting each other. Democracy in Russia is possible in the same way as it is possible in Ukraine or Belarus.

Ukraine’s success in reforming itself into successful European democracy can become the strongest inspiration for the Russian people to follow the same path. Ukraine’s success can be realised only if its integration project towards the EU becomes ambitious on both sides – Ukraine and the EU.

EU enlargement and the European integration of Ukraine and of other Eastern Partnership countries is the only EU geopolitical strategy on how to transform the entire Eastern part of the European continent (including Russia) into a democratic and peaceful region. This is the only way peace in Europe can continue for at least another 75 years. And that is why this is of the same strategic importance as the creation of the EU or NATO after the Second World War.

This is also my biggest personal dream – I hope that in my lifetime, I will be able to see Ukraine become a member of the EU and Russia transform itself into a democracy. It will mean that my children and grandchildren will be able to live in a peaceful neighbourhood.

Herman Van Rompuy: My greatest concern is that the citizens of our nations let themselves be seduced by real or disguised extremists who undermine the Union and the solidarity it needs. Moreover, populism is not supportive of democracy. We shouldn’t fall into the Trump-trap: politicising everything. When everything becomes political, that’s the end of politics. That is why it is vital for policies to produce results in priority areas for many citizens, and for those same citizens to become more involved in those policies: an ‘input and output democracy’. How to bring the methods and the spirit of local government where alienation is less, to the higher level, including the European one?  A continent like ours that is dominated by fear and uncertainty cannot play a geopolitical role. External clout depends on internal stability and strength.