I say Europe, you say…? Interview with Roberta Metsola 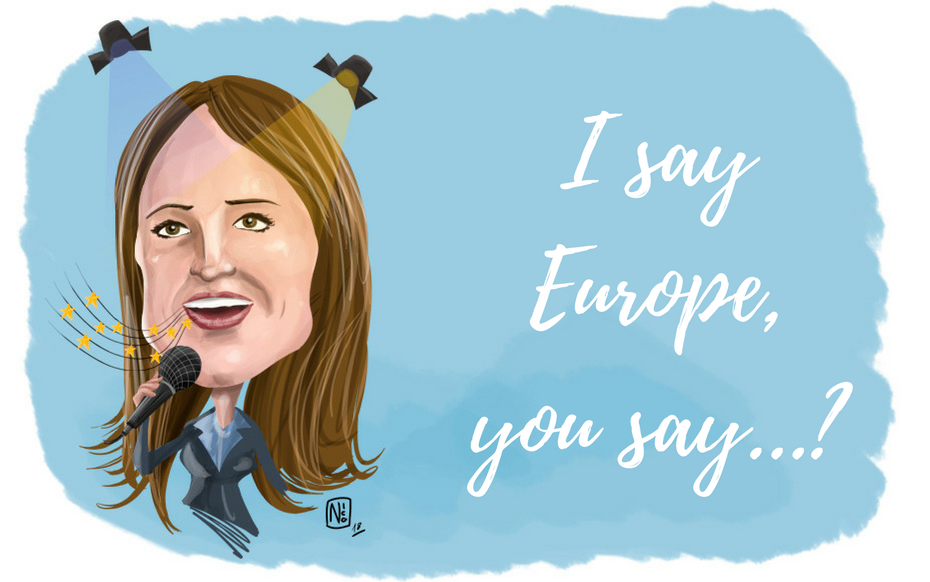 Commission Vice President Katainen’s question to you was: “What do you think are the three most important themes for the future development of the European Union?”

We need stronger action to protect the rule of law. There are fundamental values in our treaties that some Member States often find convenient to ignore.

Second, we need to focus more on trade and job creation. I strongly believe that if we further open up our markets we can finally eliminate the problem of poverty we have in Europe and provide better opportunities for the more vulnerable classes of our society.

Third, migration is the challenge of our generation. Mid-term goals which show solidarity with Member States which are facing migrant influxes are needed. In the long run it is essential that we, the EPP Government, attempt to aid the countries from which migrants are fleeing to help them get back on their feet – to show people there can be life without fear.

As one of the most active MEPs on social media and EPP Coordinator for Justice and Civil Liberties, what is your take on the Cambridge Analytica scandal and its ramifications on EU citizens? Have you thought about leaving Facebook yourself?

For our generation, data is the new gold. I think that the recent revelations have been shocking! What we have to understand is that social media is used by unscrupulous politicians and people who try to sell propaganda as facts.

I still believe that Facebook is a good tool; it is useful for me personally to reach a large number of people, both in my constituency and across Europe. The EU’s regulatory response to privacy concerns was the introduction of GDPR and privacy shield but some loopholes remain that must be worked on, and it is our responsibility to make sure that potential abuses are stopped.

Everyone who follows your work knows that you are quite outspoken when it comes to defending freedom of speech, particularly in light of the murders of journalists in Malta and Slovakia in the last six months. What should the EU do to comprehensively ensure that these travesties do not happen again?

The assassinations of Daphne Caruana Galizia and Jan Kuciak must be seen as a watershed moment in the development of Europe. What we have realised after these assassinations is that we still do not have enough tools to ensure that the protection of journalists in Finland is the same as it is in my country, or Slovakia etc.

At the same time, we don’t have the right mechanism at European level to ensure that the corrupt, the criminal and the complicit bear the political responsibility for their actions, whether directly or indirectly. We are currently pushing for the introduction of mechanisms that will remedy these issues. If we don’t do that, those who orchestrated and carried out these murders will win and we cannot allow that to happen.

Bearing in mind that you are a Vice-Chair person of the Petitions Committee in the European Parliament, one has to ask which was the most interesting petition/initiative you came across during the last 5 years?

I truly believe that this committee is the answer to the disconnect that many citizens feel, in being too far away from the EU and its institutions. We have people coming to us and saying: “look, you in Europe are not doing enough” or “I feel like my rights as a European citizen have been breached, what can you do?” These queries range across a wide variety of issues- the quality of drinking water in a small town in a member state, discriminatory or denial of pension rights and services in other member states.

Perhaps one of the most interesting cases was a man who was not allowed to take his pet dog on a plane to Ireland by a particular carrier. The excuse the carrier used was that it was an issue with national agricultural policy. This man came to us and we provided him with facts which demonstrated that this was not true.

As a mother of four, what is your favourite cartoon show that you enjoy watching with your children?

With the younger ones, classics always work, like Tom and Jerry. With the older ones, Lego Batman and Japanese cartoons. Obviously, I try to limit the amount of screen time, but I also want to ensure that they are not exposed to too much violent imagery.

Which is the most interesting myth about the EU you needed to bust in your career?

Perhaps the one that the EU and President Juncker can help us address parking issues in our country. I had to say that this is something that Juncker cannot do, although he can do a lot and he has done a lot for us.

You have been politically active since a very young age and as you were Secretary General of European Democratic Students: would you advise your kids to join the world of politics one day and how you do believe that the EU could motivate youngsters to get more involved?

Well as you can see my son is now shaking his head very vigorously. In my case, I think I joined politics because my parents taught me it is useless to complain unless you try to change something. There are too many “arm chair critics” in our society. The people need to be the ones to advocate the changes we want.

This means you should be active, not necessarily on a European level, but also on a local level or a national level. It is a pity that the younger generations don’t remember the battle Malta had to fight to actually join the EU, as we are proud Europeans. We can’t take our membership for granted and we must have enough young voices to be able to push the most important European issues forward.

Which song do you like to carpool karaoke to and with which colleague from the Parliament would you like to have a duet?

How do you think the EU could help to put an end to the uncertainty on Post-Brexit citizens’ rights?

I reiterate this also as a member of a Commonwealth country: we are looking for watertight guarantees for all EU citizens, in the UK post-Brexit. Without such guarantees, we will not green light any Brexit agreement!

Choose one of the following: Ftira or baguette?

Brussels definitely (although I loved living in Bruges)

I would like to nominate Manfred Weber, the Chairman of the EPP Group in the European Parliament. My question to him: “What do you think is the one issue challenging every single EU Member State and individual EPP parties in each member state?”