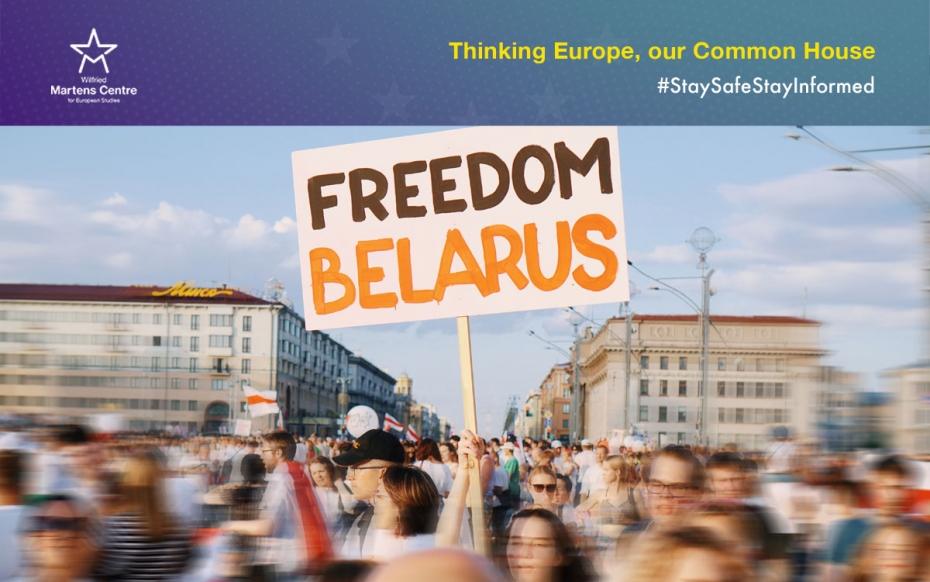 What has happened in Belarus since the massively fraudulent election of 9 August is nothing short of a miracle. Out of all the potentates in the countries of the former Soviet Union, Alexander Lukashenka – once labelled ‘Europe’s last dictator’ – seemed to be the least contested in his own country. The last 4 weeks have changed this image for good already, whatever happens from now on. Repeated massive and peaceful demonstrations in Minsk and many other cities, strikes in crucial factories, songs, pictures of women in red and white handing flowers to police, the disbelief on Lukashenka’s face when booed by workers; but also police brutality and the first signs of panic and collapse among the regime a week after the first protests: these are now imprints on our collective memories. Western democracies have to forcefully react. Here is why a ‘geopolitical’ approach to the issue is misleading, and why a principled reaction is both a moral obligation and in our own enlightened self-interest.

The fact that the regime has averted collapse for the moment, and that we are heading towards a long standoff, is only due to Putin’s public guarantee to keep Lukashenka in power, with all the overt and hybrid means at his disposal. Of course, Putin despises Lukashenka, but the Western pundits who predicted, at the beginning of the protests, that Putin would quickly ditch him and ‘install’ a more dynamic and more clearly pro-Russian leader, were wrong. Lukashenka is good enough for Putin because, in addition to being now totally dependent on the Kremlin, his erstwhile ‘fight with the two monsters’ (i.e. playing the West and Russia against each other) is over, in favour of the latter. For now, only keeping Lukashenka in power is the guarantee that Belarus doesn’t undergo some kind of ‘colour revolution’ – and a democratic revolution is precisely what Putin is most afraid of, because Russian democrats would be tremendously encouraged by it. This is also why Putin tried to eliminate their front man, Aleksei Navalny, in August. The question of external alliances of a post-Lukashenka Belarus is secondary to the democracy factor, especially since none of the leading Belarusian democrats have even touched upon the topic of EU or NATO membership – only Lukashenka and Russian propaganda are labelling the protests, quite ridiculously, as products of Western machinations.

Just like any other crisis involving Russia, this case has seen its share of inflationary use of the term ‘geopolitics’. That time-honoured term comes, roughly speaking, in two variants: one is the (actually rather banal) statement that geography is one of many factors explaining the behavior of political actors – mostly national governments. That’s a fact. Witness the respective importance given recently by the Greek government to the conflict with Turkey, and by the Polish and Baltic governments to the democratic revolution in Belarus. The other variant, which happens to have been particularly overblown in the Belarus debate, is the belief that geopolitics is something akin to a natural science, whose immutable ‘laws’ prescribe or render impossible this or that political development, as if there were a geopolitical law of gravity that says: small neighbours of great powers (such as Russia) cannot choose their own political systems, or foreign policies and alliances. If that were true, the Berlin Wall would not have come down in 1989, and the Warsaw Pact would still be in place. The big lesson of the 1980s – remember, it took a decade from the birth of Solidarność to the end of the Soviet Union – is that politics, not geography, calls the shots in the end.

For our freedom and yours

Regarding the West’s reaction to the miracle of Belarus and Putin’s actions, the first conclusion is that the geopolitical games played by some in the West (for example by the PiS government in Warsaw until 9 August), sucking up to Lukashenka to drag him away from Putin, have turned out to be as useless as they always were. If we want a safe and free future for Europe, we need to put geopolitics in its place.

Secondly, while not being able to change the situation in Belarus directly, there are plenty of things the EU should do: Come up with a ‘Magnitsky’ list of Belarusian officials for asset freezes and travel bans, delegitimise Lukashenka (as the Lithuanians already have), propose the Sakharov or Nobel Peace Prize for Sviatlana and Sergei Tsikhanouski, and a dramatic increase in visual and financial support for all Belarusian democrats, especially those who are victim of oppression. And Germany should do what should have happened years ago: scrap NordStream 2. There are also things Europeans should not do, such as: fall over ourselves to ‘talk to Putin’ about the future of Belarus. That future is the business of Belarusians.

Thirdly and finally, we should all remind ourselves that we ought to do these things not only for moral reasons, but in our own interest. If Lukashenka and Putin get away with their brazen operation, flouting not only all standards of human decency, but concrete commitments signed by them, then our own freedom will soon be at stake. In that sense, Belarus is everywhere. As the globally active Polish freedom fighters of the 19th century would have put it: The struggle is about our freedom as much as about the Belarusians. And this ‘fraternal assistance’ for Lukashenka might actually be the beginning of the end for Putin.