The message from the streets of Kyiv 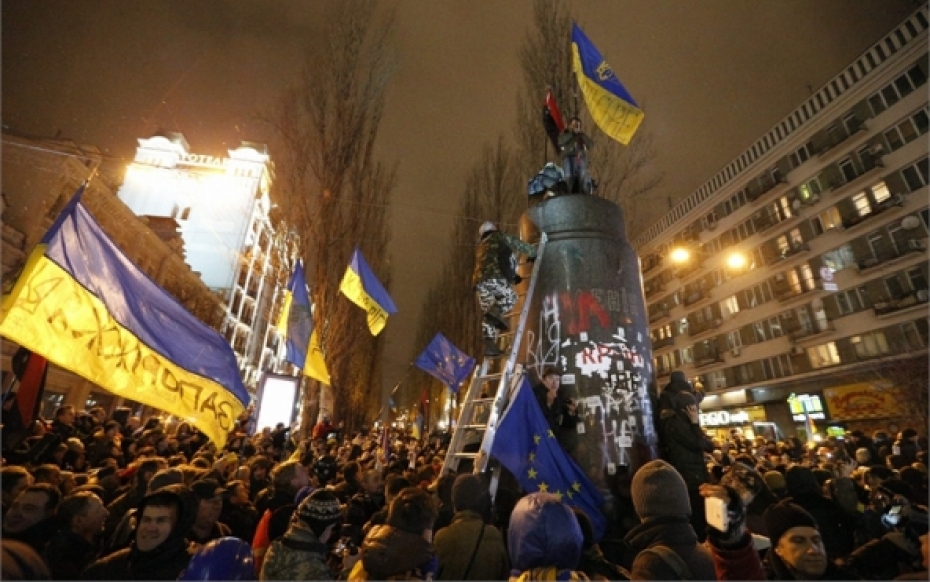 Two weeks can be a long time in politics. Remember the downbeat mood in the EU on 27 November, after Ukrainian President Yanukovych’s decision to ditch the deal with the EU? With the Eastern Partnership in near shambles, the finger-pointing, the recriminations, the understanding shown for Ukrainian industry dependent on Russian, not EU export markets, the suggestions that Brussels had not offered enough incentives to Ukraine, and, of course, the accusation that it had been a fatal mistake to stick to principles about Yulia Timoshenko?

All that seems ages ago now. Last Sunday’s mass demonstration in the streets of Kiev, the biggest since 2004, came as a culmination of a rising groundswell of protest against the government, and against its violent crackdown on a pro-EU demonstration on 30 November. Of course, only a fraction of the 45 million Ukrainians are demonstrating here. And yet, it’s some of the best and brightest, and they are not only from the West of the country. Plus, although this was initially a rather leaderless people’s protest, with Vitali Klitschko, the opposition now has a fresh leader that can at least hold out the prospect of a better future and credibly promise not to repeat the mistakes made by centre right Ukrainians after 2004.

To put it in a nutshell: Last Sunday’s toppling of the Lenin statue was the best expression of what this is all about: It’s about lies, it’s about Russia, and it’s about freedom.

Because three things have transpired in these heady two weeks:

Ukraine is in a mess. Its oligarch-based government is facing default. Yanukovych doesn’t seem to be able to raise the minimal credits required to keep the country afloat, not to mention sorting out the economy. Make no mistake: That man is no friend of Putin’s. In the world according to Yanukovych, Ukraine pushes its national interest in some kind of a balancing act between the West and Russia. In the eyes of the oligarchs, it thereby preserves lucrative sleaze and avoids bothersome controls by eurocrats. But a rising number of Ukrainians don’t buy this any longer because it doesn’t produce the minimal prosperity and stability they expect. They want freedom. And Russia wants Ukraine ‘back’.

Russia is playing hardball. Some people have known that for many years, but it has dawned on really everyone in the EU in the last couple of weeks. Russia is actively and ruthlessly rolling back the already meagre successes of democracy and the rule of law in the countries of the former Soviet Union. It is using not only strongarm tactics, such as trade boycotts, energy blackmail and threats about national security – or throwing money around by buying assets and people. It is also spreading ideology – as incredible as it seems. This ideology is based on the notion of a common past – sometimes referring to the good old days of the Soviet Union, sometimes to centuries before. But in any event, the putinist narrative goes, Western ways are evil ways. We Europeans can tell ourselves a thousand times that international relations in Europe’s east can be win-win for all: That is to no avail as long as Russia defines the game as zero-sum. But current Russia is a giant with clay feet. Its long term economic and demographic prospects are atrocious. And it has its own growing disenfranchised middle class whose first stirrings we have seen in the Moscow demonstrations a year ago.

The Ukrainians are showing us what believing in the West means. Hundreds of thousands of them are braving the cold, and even risking to get beaten up by riot police. As Ed Lucas wrote in the Economist, no one takes to the streets in favour of sleazy authoritarianism. What the demonstrators want is a whole range of things, from the rule of law and an end to corruption, to decent wages and pensions, to true independence for their country. For any future government, these are daunting expectations, in view of the current mess.

There is one drawback to the developments of the last two weeks, though: The political meta-concept of geopolitics has never been more fashionable in EU discourse. Now, I’m far from claiming that geography has no influence on politics. But if, as Napoleon claimed, geography was the destiny of nations (and, by implication, political ideas like freedom of secondary importance), NATO would have collapsed instead of the Warsaw Pact, and the Soviet Union might as well be alive and kicking. And today in Ukraine (just as in 2004), there is no neat automatic East-West divide that would suggest a politico-geographic split in the country. There is more of a divide between different groups in the population: Those with a desire for fundamental change, and those with an interest in the status quo, out of greed or out of fear.

And this is where the EU’s response to the situation has to begin: With the power of ideas such as freedom and the rule of law. We were losing faith in that ourselves. It took people like Vitali Klitschko and the men and women in ‘Euromaidan’ to remind us. However the situation in Ukraine develops now: At some point in the future, a new government will be in place that requires our help. It is good that the European People’s Party already has both Ms Timoshenko’s Batkivshchina and Mr Klitschko’s UDAR parties as observer members. And it is good that the EU and the US have unequivocally supported free speech and condemned police brutality and provocations in Ukraine. Second, we need to stick to the prospect of trade and political dialogue (in association agreements) while intensifying work on civil society, especially students, entrepreneurs and future leaders. Visa policy is extremely important in this respect, but also coherent democracy support. Third, of course more resources will be needed for some time to facilitate economic reforms – that’s unavoidable. Last but not least, we have to become much more patient and farsighted, not focused on political and economic success in a few years. The struggle over Eastern Europe is closer to its beginning than to its end. But it’s good that virtually everyone in the EU now recognises it as a struggle.