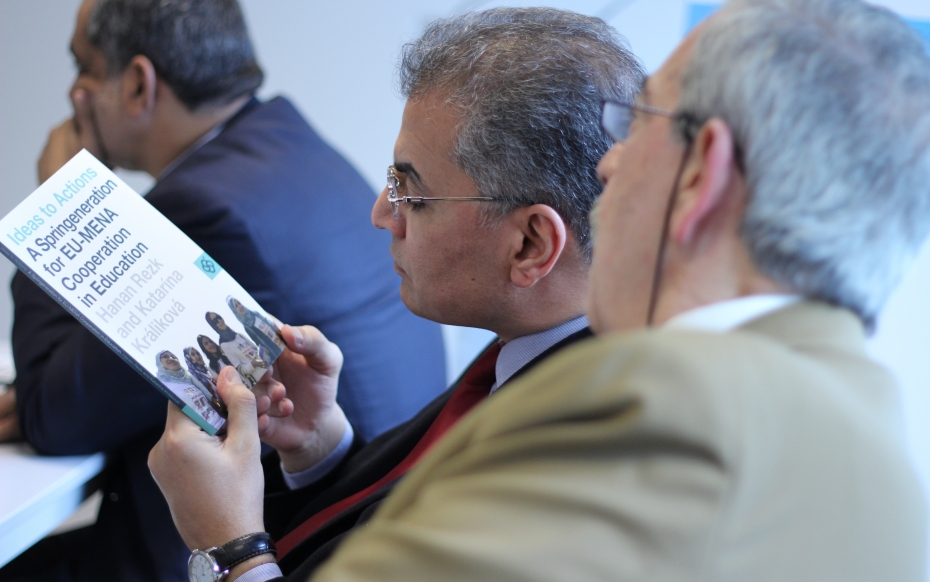 On March 27, the Centre for European Studies welcomed a delegation of the Alwasat Party (Centre Party) from Egypt. The aim of the meeting was to exchange views on the current political situation in Egypt and to discuss the role of the EU in the country’s transition process. The Alwasat Party aims to be one of the parties engaged in breaking the deadlock between the ruling Islamists and the opposition. With their long history of opposition under the old regime and the current Muslim Brotherhood government, they could act as credible mediators as they are also closely involved in the current political developments of Egypt.

The delegation was formed by Abou Elela Mady, Chairman, Essam Sultan and Hatem Azzam, Vice-Chairmen and Amr Farouk, Speaker of the party. A day earlier, members of the delegation had participated in a conference organised by the Hanns Seidel Foundation (Brussels office), entitled “Polarized Egypt – Can moderate political Islam bridge the gap?” The delegation’s visit to Brussels was facilitated by Christian Forstner, HSS Brussels office Director and Nina Prasch, HSS Resident Representative in Egypt, also present during the meeting.

CES Director Tomi Huhtanen and Ingrid Habets, foreign policy Research Officer, presented the Centre’s activities related to the Middle East and North Africa region in general and Egypt in particular. Mr Huhtanen emphasised that the Arab Spring events had led to an increased focus of the EU on its neighborhood policies; as a result, the CES also started conducting research, establishing links and offering policy advice on the developments in the region. Ms Habets then presented the results of the Springeneration online initiative, a 2011 survey on how the EU could positively contribute to the momentous changes taking place in many MENA countries. She stressed that while the European Union was mainly focusing on human rights issues at the time, the survey revealed that the 70,000 young respondents from the region emphasised instead the importance of cooperation in the fields of education, entrepreneurship and economic development.

Furthermore, Nicolas Briec, European People’s Party Secretary of External Relations, outlined the EPP’s engagement and support for democratic movements in the region. During the 2011 EPP Marseille Congress, the EPP in cooperation with the CES hosted a group of 40 MENA political activists; in 2012, together with the EPP Group and the CES, they welcomed to Brussels political leaders from four Tunisian parties. Through all these activities, the EPP remains committed to dialogue with like-minded partners and parties in the region; in this respect, the work of political foundations such as the Hanns Seidel Foundation are of great added value.

The Centre for European Studies will continue to devote attention and carry out research focusing on developments in this region. To this end, a policy brief by Lorenzo Vidino, senior fellow at the Centre for Security Studies, ETH Zurich, on the role of the Muslim Brotherhood, its challenges and future scenarios will be available online on the CES website end of April.