I say Europe, you say…? Interview with Maria Walsh 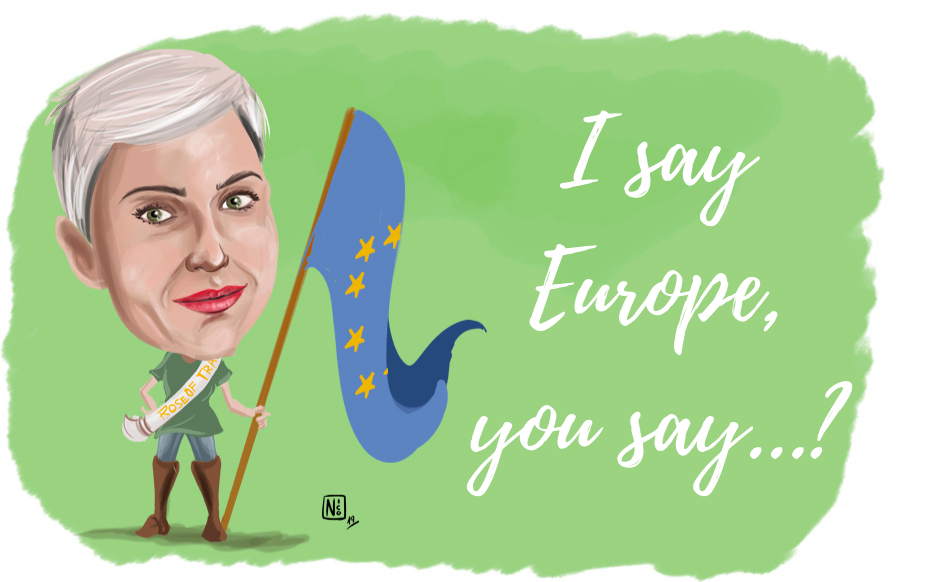 What was the biggest myth about the EU that you had to bust during the campaign?

There are a lot of myths about the EU. I’m a first-time politician, never ran a European campaign, never ran in any campaign. But I am very passionate about people. One of the myths was that if you are not from a political family or with political experience, you would never make it to the European Union. And I am very honoured to be an example that you can kick that myth in the derrière and make a difference.

You are one of the youngest MEPs in the European Parliament, but it would be interesting to know what your first job was?

I was 8 or 9 and I used to work in our local market where animals are sold. I used to help farmers load and offload sheep into the trailor. My first paying job was when I was 12, I worked in a local guest hotel, cleaning and serving. This enabled me to build a rapport with different personalities and was fun.

What was the inspiration behind serving as a member of the Army Reserve in Ireland and volunteering with the Cavalry Corps? What was the most interesting part of that experience?

This is really important to me. If I could do both, be an MEP and a trooper in the reserves, I would do it happily. I was born American and raised in Ireland, and I always had admiration for our volunteers, as well as towards our fulltime soldiers men and women who put on a uniform and represent our country.

Now, Ireland is a neutral state and we protect that. But we also have soldiers who are constantly training to protect us in climate issues such as flood relief, or in a bomb squad, special forces, or protecting our dignitaries. Our defence force does a number of jobs even in a neutral state. When I realised I was getting a bit older and if I didn’t go for the reserves when and if I did, it would’ve been one of my greatest regrets. I absolutely adored it. It challenged me, it allowed me to be a better team player and to appreciate my Irish flag much more.

You mentioned that you spent a part of your life in the United States and I know that you are a member of the delegation for the relations with the United States. What do you think is the future of the transatlantic relationship?

It is not lost on me that the Commissioner-designate for trade is an Irishman called Phil Hogan, with a breadth of experience, particularly in agriculture. As the European Union, we are constantly negotiating better ways for our citizens and our trade to be protected. And then you asked me earlier, democracy. That is important now in the US more than ever and we need to make sure that our politics and the way our communities are thriving, being built and rebuilt is protected by both sides. There is a lot more to be done and I am excited to sit on that delegation.

This year we have witnessed the election of the first female Commission president and for the first time, we will have a gender-balanced Commission college. What do you see as the next milestones to further gender balance in Europe?

When Ursula Von der Leyen spoke in the hemicycle in Strasbourg, I, as a first-time MEP, as a female, as the youngest MEP coming from Ireland – it was remarkable to see history in its making. And I think perhaps it was lost on some, but it wasn’t lost on me.  We need to work better together on the gender pay gap, on gender pension issues, and I would love to see more diversity in the Commissioners college. What do I mean by that? Well, our ethnicity, our cultures, our religions, our orientations, that’s more important, not just gender, because we have a number of words attached to diversity.

This is so hard. I go through a bit of a love-hate relationship with social media. But it’s now more than ever that social media has a great footprint for us on how to translate the information back to our Member States. In terms of politics, I love and I highly recommend people to follow Alexandria Ocasio-Cortez – @RepAOC, a first-time Congresswoman. When it comes to diversity there is The Shona Project @shonadotie and when it comes to mental health it would be Jigsaw Offaly @jigsaw_offaly. You can find them both on Twitter and Instagram.  I am a  big sports fan so @MayoGAA would be a big one to follow from my side.

You’ve just mentioned mental health and I know that this has been of the topics that you have urged the new Commission to take as a priority. What should we focus on first to address this issue?

All throughout the campaign, I’ve talked about driving the European year of good mental health. I’m not expecting that to happen tomorrow but within the mandate of 5 years, but I personally want it next year. I want it as quickly as possible. Because I think if we are really looking at trade, as we talked about earlier about the US and China, about trade with our neighbour the UK, we’re actually talking about currency and developing skillsets for our labour market. At the centre of every conversation is mental health. And if we have citizens being mindful of the impact of the positive and negative mental health, then nothing moves.

Our whole communities break down and it frustrates me that it hasn’t been a competency of the EU yet. But that’s why we have passionate people like you and me here to drive that message. We need to get it into our education programmes and get funding for pilot programmes on mental health resources for both our young and old. Education and up-skilling is a great start for that. But I personally need every Commissioner talking about mental health as if it’s bigger than anything else that they’re going to look at.  Everything is a thread into mental health and we need to secure that.

Speaking of translating topics to citizens, you are already a sitting member on the Employment and Social Affairs Committee. How do you translate complex topics such as social policies and employments to the voters back home?

Firstly you have to constantly make sure that you are asking the questions that you think the citizens would like you to ask. It’s important that you dissect that and bring it home. When people think of the EU, they think of European symbols like funding. But the EU means a lot more than that. Over the campaign, I’ve challenged voters, particularly young ones to look for European symbols such as EU supported buildings, universities, and roads. When we look at the visible footprint, not just the financial impact, we begin to understand the pro-European stance better.

Let’s say that you are playing football. You are the captain of “Team Europe” and it’s the last minute of the game. You have to pick one colleague to make the penalty. Whom do you pick?

I should wear my country jersey and say that Sean Kelly could kick a good penalty. He was the president of GAA, which is the biggest sports organisation in Ireland, so I would say that he would be pretty dissent in taking a pint or a penalty. I’m going to regret saying this though. Yes, I say Sean Kelly.

Coming back to your home country, agriculture is a big part of life there and your economy relies heavily on this sector. How do you see the adoption of sustainable agricultural practices?

Actually, I just came from a call with a young constituent that I have in my area, a man called Kevin Moran who won ‘Young Farm of the Year’ a couple of years ago. He is not only planting trees but he’s also targeting his herd emissions, aiming to be close to 0%  emissions as soon as the next 2-3 years. We need to start listening a little bit more to our younger and older farmers who farm the land.

All throughout the campaign, I’ve talked about a transition period. We cannot point fingers and say ‘you’re not green enough and this hasn’t happened enough’, but we need to help our citizens along on this transition and it can’t happen too fast because we can’t leave people behind. Our first female Commission President has tasked herself with the Green Deal and all eyes are on that. It’s my job as a new MEP to keep the pressure on my government and to make sure citizens are heard.

Which EPP colleague would you suggest for the next interview and what would be the question you would ask?

I would choose Polish MEP Magdalena Adamowicz. She is a phenomenal woman tackling hate speech through her own personal circumstance and also a first-time MEP in the EPP Group. She could kick a good penalty too if needed! My question to her would be: what is the one thing that we could do tomorrow in the EU to reduce hate speech?