I say Europe, you say…? Interview with Mairead McGuinness 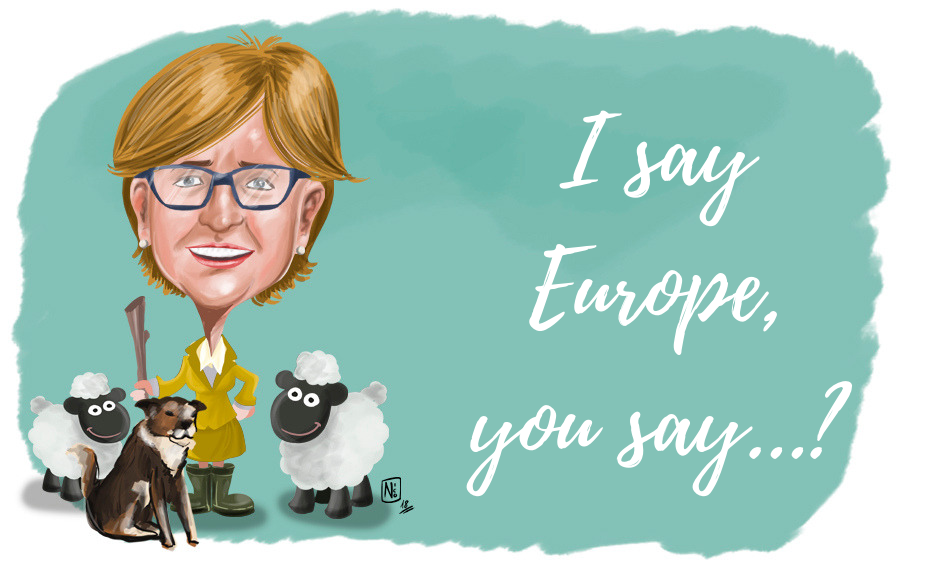 I say Europe you say…?

Home. That’s what I say when you say Europe. I am Irish, I live in Ireland, it is my home. I work in Brussels, but I very much see Europe, the European Union, as also home. I hope that people look at it that way.

You have been nominated by Marianne Thyssen and her question was: “What is your message to European citizens ahead of the upcoming European elections?”

First of all, thanks to Marianne for nominating me. I think my message is a consistent one: to try and understand what Europe is rather than looking at what its failures are. I think we look only where the European Union is weak, but tend to forget where it is strong.

I would say to people to look at the values the European Union has brought to their lives and the value of peace, the difficulty of working together, but also the importance of countries working together. The value of being around a table is much greater than when countries operating completely separately or drifting off, as it is happening with the United Kingdom. I think we are greater when we are together.

You’ve been a presenter of the show “Ear to the ground” in Ireland. We wanted to ask you how do you manage to keep the ear to the ground and listen to the needs of your constituency?

Wherever I am or whatever I am doing either working in plenary or in this office, I’m always thinking of the people I represent. When I am in Ireland, I am with the people I represent. So I never lose touch. I even use the phrase ‘keep my ear to the ground’ all the time, because it makes people connect with my past and with the television programme I worked on but it also says a great deal about the work I do and how I do it. I mean what would be the point of being in this job if we didn’t work tirelessly for and on behalf of the people who have elected us!

I think for all of us a no-deal Brexit is almost unthinkable. The EU and individual Member States and especially the United Kingdom, are putting plans in place for that possibility, but I don’t think there is anybody wishing for a no-deal Brexit, because every single aspect of all our lives will be negatively impacted. Sometimes I get the impression that some in the United Kingdom think that they will be

immune to the negative impacts of no-deal, but in fact they will be hurt by a no-deal. I am really hoping that good politics will prevail over mediocre or bad politics and that we can see the value of the withdrawal agreement that is on the table and that it will be ratified, I hope, by the House of Commons in January.

Funnily enough, I think a lot of myths have been busted because of Brexit, which to some extent happened because there were so many myths out there that got oxygen in the UK press and that were never discredited. I think the expression I find most distasteful is ‘faceless Brussels bureaucrat’ – I have been called that when I have been on British media. It is a generic term of disrespect for anyone involved in the EU, elected or not.

I am not faceless and I am not a bureaucrat. But I have great respect for bureaucrats. The people who work in this office with me could be termed faceless bureaucrats and in their work every day they have people front and centre in their minds, assisting them on an individual basis where required and collectively through work on legislation.

How do you think that digitalisation and robotisation are impacting health systems of European countries? What is the EU doing to use the technological advancement to ensure healthy and active life for its citizens?

I recently visited a company in my own constituency, a new company that was developing a robotic production line for sale to the US. I was mesmerized by the technology. These robotic production lines are going to replace some of the difficult jobs that individuals were doing. So I think at that level you are going to see a displacement of people by robotics and hopefully those people can be trained to do other work, which may be more stimulating and more beneficial.

When it comes to the health systems, I recently had someone I know undergo surgery with robotics. So I think for our health systems and for the quality of the health care, robotics will be more common in diagnosis, treatment, and surgeries. The biggest challenge for the European Union and Member States is to ensure that our legislation and our rules keep up to speed with the pace of change in new technologies – this is part of our Medical Devices Regulation, which is currently being implemented. I think these issues will have huge impacts and what we all want to know is that they will be positive.

As the VP of the European Parliament, could you share with us your favourite anecdote from a plenary or committee session? Which MEP has the best sense of humour in your view?

What I love about chairing the session, especially when there are votes and there are issues, is the challenge of maintaining control. I think it is quite a mind game and I enjoy that. Funnily enough, I did use a gavel in the chamber recently, which was produced by a voluntary group called Men’s Sheds Ireland, who had won a European Citizen’s Prize. I bought the gavel from them and opened the voting session with it. I got a great warm round of applause.

I think the Irish have a great sense of humour. And we have the ability to make people laugh, to laugh with others and laugh at ourselves. I hope we have scattered a little bit of our sense of humour across the Members States. Frankly, I think the more laughter we have, the more humour we have in our work in the plenary, I think the easier it is to get work done, because sometimes being too serious and too methodical and too rigid all the time doesn’t get the best for people. We all need to laugh more.

The Grand Auld Stretch (@theauldsthretch) is certainly one of my favourites. My next one would be an account dedicated to Seamus Heaney (@HeaneyDaily), one of our very famous poets. Every day somebody somewhere puts out a few lines written by him. On one occasion when I was chairing the plenary and it was a bit tense, I took an eye to what was up that day and I decided to read it at the end of the debate, and it fitted quite perfectly with the debate that was going on.

The third one, well there’s a very interesting dairy farming family in Cork in Ireland. Their user name is @Peterhynes15, but it’s not just about Peter, but his wife Paula and their 3 daughters. They tweet all the time from their milking parlour, from their car, from their kitchen and it’s absolutely fantastic.

Who of your colleagues would you team up with to sing Christmas carols?

We were doing a picture with the EPP and Deirdre Clune, Eva Paunova and myself decided to sing along as well. So, the three of us have already sang, so we could do that again! I do like singing, I don’t have a great voice, but again I think in Ireland we sing regardless of the quality of our voices! Though there are some fantastic Irish singers.

With a post Brexit pressure on the CAP budget, what can be done to create funding for new policy initiatives in agriculture?

I think the problem Europe faces is that the more we do together, the more we want to do together. I think we’re going to have to have a very honest conversation amongst ourselves. If we’re going to have less money for those policies, what we need to do, and we’re doing it, is look at what the market failures are when it comes to food. We just signed off on legislation banning unfair trading practices in the food supply chain. I hope this legislation will help reduce the relentless pressure on producers and hopefully give them a better share of the final retail price.

What it comes to getting more money for the EU budget, it is down to the member states. They will have to look into their hearts and ask themselves if they will match their words of support for agriculture and rural regions with hard cash. The more we have moved away from linking support payments to production, the more difficult it has become to find a system that is sustainable, that meets the needs of farmers and is fair.

What made the top of your New Year’s Resolutions list for 2019?

I am going to be kinder to myself, to ourselves in the office. We work hard and we work long hours. We are very committed to do the best we can. I think that sometimes in all of that delivering and trying to answer everybody’s needs, we forget that we’re all human beings and that we need a little time off. And I suppose because of the elections, I’m going to have to make sure I don’t run at too fast a pace. I’m saying this knowing I’m going to fail in my own aspirations. But it is no harm to set out this, at least as an objective.

Choose one of the following: radio or print journalism?

Radio for the drama and communication. Print for endurance.

I mean there is no choice here! Smurfs aren’t real, but leprechauns are.

I think you should interview Esteban González Pons. Maybe you could ask him about the Smurfs versus the leprechauns. Not as the first question, but just don’t forget to ask him that. I won’t explain why.