What should the EU-Russia summit be about? 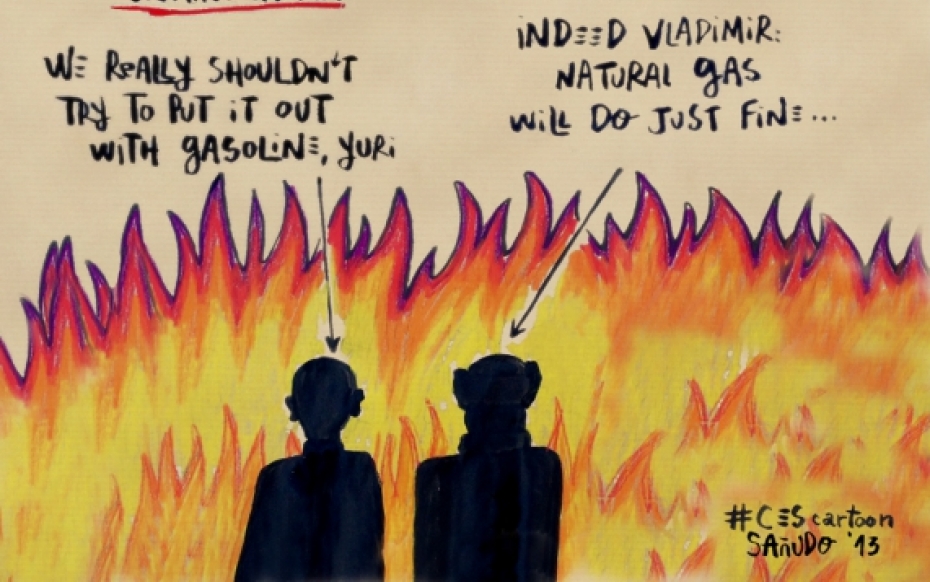 The battlefield for defending European values has shifted to the East, to the streets of Kiev, Tbilisi and other Eastern neighbours. While these regions are willing to take full responsibility for this push for freedom, this is not only their battle and the European Union should signal this loudly and clearly in its dialogue with Russia, writes Salome Samadashvili.

As the events in Kiev have taken on a truly dramatic, violent and bloody turn, Brussels is preparing for yet another EU-Russia summit. Russia’s Ambassador to the EU has declared that this summit will not be about Ukraine. His boss, Foreign Minister Lavrov, using the terms of ‘strategic rivalry’, reminiscent of the days of the Cold War, has asserted that Russia will not allow foreign powers to break-up Ukraine. Meanwhile the EU continues to talk about ’strategic partnership’ with Russia and has not, publicly at least, pointed a finger at Moscow as the party responsible for turning Ukraine into a virtual war-zone.

The Cold War has ended without a peace treaty which would settle the terms of the outcome of this decades long standoff between the West and Russia. It was assumed that the constituent parts of the former USSR, Russia included, as well as its former satellite states in Central and Eastern Europe would venture on to become full democracies. The ‘end of history’ would bring stability and peace to the European continent. While in a long term this assumption might still be true, believing that the strategic rivalry between Russia and the West has already become a distant history, will be of the most tragic consequences for us, people living in the former Soviet republics. It can will also certainly be damaging to the long term interests of Europe.

Let’s have no doubts – what we witness in Ukraine today is the Kremlin’s attempt to impose on the world its own terms of the end of the Cold War. The settlement is written not in ink, but blood, shed in the streets of Ukraine today and my own country, Georgia, five years earlier. So at the highest political forum of the EU-Russia cooperation, it would be both timely and necessary to ask, what does “strategic partnership” with the current Kremlin administration mean? If it means a shared vision for the future and cooperation around common objectives, than the EU-Russia summit indeed cannot be only about Ukraine, it has to be about even bigger questions, which should define the EU’s policy towards Russia in the years to come.

It would be helpful if Russia got a clear signal that it cannot aspire to remain a “strategic partner” of Europe, or be part of the club of nations consisting of the wealthy democracies, for example G8 or OECD, as long as in addition to disregard for democracy in its own country, the Kremlin continues to support instability and non-democratic regimes in its neighborhood. Russia needs to know that its vital interests – such as cooperation in the field of energy, will suffer due to its choice to undermine democratic transformation and modernization of the nations in its former Empire. Freedom to travel to Europe, both for the citizens of the Russian Federation and for the elites with diplomatic passports, is another point of influence at the EU’s hands. The EU can signal its readiness to use measures such as the Magnitski Act to make clear that it does not view the current Russian government as a partner with whom it can do business as usual.

While the options, which the EU has at its disposal are not numerous, the leverage which Europe has over Moscow is much stronger, than the EU has so far been willing to acknowledge. Russia cannot continue its economic development without access to the EU markets, technological know-how or investment. Europe can make it clear that these cannot be taken for granted. Using its leverage on Russia now rather than later is in Europe’s own strategic interests. While the economic interests of the European countries in cooperation with Russia are self-evident, in a long-term perspective, an increasingly assertive, non-democratic and aggressive Russia will also hurt the EU’s economic and business ventures in the region.

“No new Munich” has been the modus operandi of the past 20 years – the West has assured the newly independent states of the former USSR, over and over again, that there would be no more agreements on spheres of influence at the expanse of the small, formerly captive nations. The fact that this continues to be true, I hope, will also be made clear at the Summit. In the coming months this should also be proven not only through words, but by demonstrating a clear commitment of the EU for greater reengagement with our countries, focused on broad support for democratization and economic growth.

Yes, we live in an increasingly complex world and the EU needs the Russian cooperation on many fronts, not least on the Middle East and Iran. But the challenges posed by the recent economic crises notwithstanding, we also live in an increasingly prosperous world, secured by advancement of democracy and freedom. We see what EU integration has brought to the countries in Central and Eastern Europe and we aspire to the same for our nations. Freedom, security, prosperity and the right to make independent choices about the future: That is what we hope for. The fact that the current Russian regime, which denies those same rights to its own people, sees this as a threat to its security, does not make our choice any less wise or legitimate. Undermining these freedoms is not a “legitimate” interest of the Russian Federation with respect to its neighbors. Which I hope will also be made clear at this Summit.

In competition of different visions for the best value system for the advancement of humanity, the battlefield for defending European values has shifted to the East, to the streets of Kiev, Tbilisi and other Eastern neighbors. While we are willing to take full responsibility in this strife for freedom, this is not only our battle. I hope the European Union will signal this loudly and clearly in its dialogue with Russia.

[Editorial published by EurActiv on 28 January 2014]