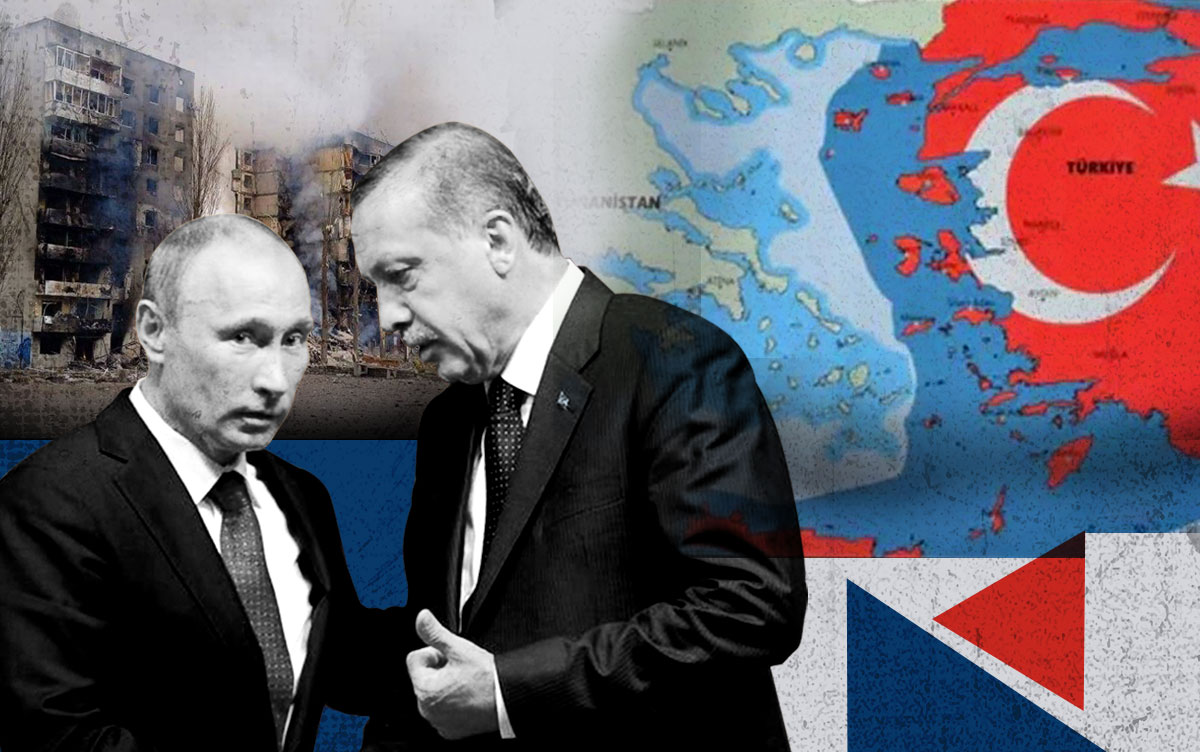 On 24 February 2022, Russian President Vladimir Putin ordered his troops to invade Ukraine. In the televised address he gave justifying his actions, Putin stated the “operation” had the purpose of protecting people facing humiliation and discrimination due to their Russian origins.

This rhetoric lies at the core of the concept of “Russkiy Mir” (Russian World). This worldview holds that Russia is not simply a state, but in fact the protector of Russian civilisation both at home and abroad. One can trace the roots of this idea to the post-Soviet era, when it was conceived as an ideological, political and geopolitical basis to legitimise Russia’s new domestic and foreign policy.

A bit further South, in Ankara, a similar and equally antagonistic concept which helps keep boundaries unclear was created by Turkish Navy officers and endorsed by Turkish elites and the wider public. “Mavi Vatan” (Blue Homeland) has, since 2019, become the spearhead of Turkish revisionism in the Aegean and Eastern Mediterranean, mainly targeting Greece and Cyprus; and therefore, the European Union’s vital interests and security.

One could wonder what the connection is between these two doctrines. First and foremost, both consider Russia and Turkey respectively as the focal points of the international system, while defying their neighbours alongside any notion of international law. They take as fact that history treated Russia and Turkey unfairly and their borders should be re-examined. On that basis, Russia annexed Crimea in 2014; today, Erdoğan is taking aim at the 1923 Lausanne Treaty that defined Turkey’s modern borders. But the similarities do not end here; let’s run through a few of them.

Fear of encirclement: Both countries fear external enemies are trying to restrict them to their current borders. They also interpret the West as using proxy states such as Ukraine and Greece in order to complete their encirclement. It is difficult for the Kremlin and Aksaray to understand how smaller countries can act outside their sphere of influence.

Imperial past and hegemonic ambitions: Moscow and Ankara perceive themselves as the heirs to an imperial past, which they contrast to their current status. Sovereign countries, formerly part of their respective empires, are only seen as territories of their vital space. They try to play a hegemonic role that almost always exceeds their actual military, economic and geopolitical strength.

Manipulation of religion: The Russian Orthodox Church has always been one of the most essential foreign policy tools for “Russkiy Mir”, particularly in the Balkans and neighbouring Slavic states. The Czarist dream of Moscow as the “Third Rome” is also a very convenient concept for Erdoğan’s regime, who would enjoy seeing the Ecumenical Patriarchate losing its historical influence among the global Orthodox community.

Similarly, Erdoğan’s attempt to present himself as the protector of all Muslims has found fertile ground in the Balkans and the Middle East, while it has garnered strong reactions from states such as Egypt, the U.A.E. and Saudi Arabia.

Demilitarisation: Russia’s denial of Ukraine’s NATO perspective and a possible Western military presence was one of the reasons that led Moscow to attack Kyiv.

Similarly, Turkey alleges that the Eastern Greek islands should be demilitarised, otherwise, Greek sovereignty over the islands might be called into question. However, there is no connection between both issues in the Treaties (Lausanne 1923, Paris 1947). In addition, it is hard to see how a few islands with a population of 400.000 people pose any kind of threat to Turkey, a state which has invaded and occupied part of Cyprus since 1974, maintains one of the strongest formations of the Turkish Army (the second largest in NATO) immediately across Greece’s waters, has invoked an automatic “casus belli” against Greece if it exercises its sovereign rights in the Aegean and whose leadership recently unleashed direct military threats against an EU member.

Minorities/Human rights: Russkiy Mir perceives Russians as a territorially divided peoples which Russia should unite, making the protection of all Russian-speakers and their rights of utmost priority to the Russian state. This perception has been at the heart of Russia’s aggressive behaviour since 2008. Obviously, the widespread violation of human rights, discrimination against ethnic and other minorities, as well as the torture and prosecution of opposition figures through sham trials do not bother Russian leadership.

Similar trends have emerged in Turkey, especially after the failed coup d’état in 2016. Although Turkey condemns Greek authorities for allegedly mistreating the Muslim minority protected by the Lausanne Treaty, it is worth mentioning that Greek Muslims have doubled their numbers since 1923 while actively participating in the country’s political, economic and social life. Conversely, the Greeks of Istanbul, Gokceada/Imvros and Bozcaada/Tenedos (also protected by the Lausanne Treaty) have regularly fallen victim to prosecution and deportation, resulting in the reduction of their number from 200.000 a century ago to 3.000 today.

Hybrid war/Fake News: Both regimes have extensively used means of hybrid warfare and disinformation. From Russia’s interference in the 2016 US election and President Erdoğan’s “advice” to Turkish voters living in the Netherlands and Germany, to the weaponisation of refugees and immigrants in Evros (2020) and at the Belarus-Poland border (2021-2022), the aim never changes. To distort reality, and penetrate and destabilise neighbouring countries and the West.

Undoubtedly, both countries are very important for the stability of the international system and channels of communication should always remain open. However, it seems that especially in the case of Turkey, there has been a clear foreign policy shift. Hardly anyone believes Turkey is part of the Western security system anymore. Its Eurasian preference is evident in the statements not only of the government, but of the entire political class.

Europe and the West turned a blind eye to Russian aggression and revisionism for many years, with dreadful consequences; it would be catastrophic to allow this to happen once again in the Eastern Mediterranean.