After 1 Year, a New Chapter for the Martens Centre 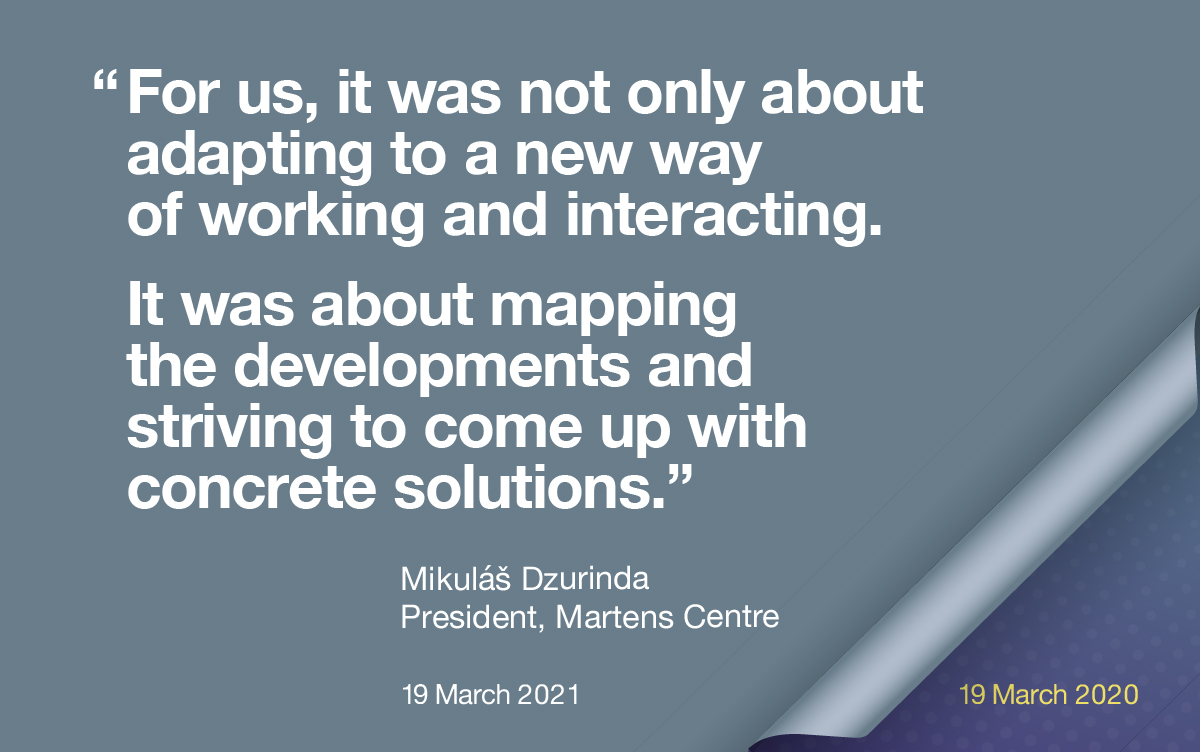 2020’s label will unfortunately be, above all, the year of the COVID-19 pandemic. It has marked the fates of many people, the way of life we used to enjoy, the way in which we communicated and worked, and in fact the entire world. On one hand, it has caused unprecedent fear for human lives, but on the other hand it stimulated significant ones, such as the great effort to effectively coordinate the fight against the virus and the decision to create the Recovery Fund – Next Generation EU. However, we ended the year with the faith that the vaccines humanity developed will save human lives and gradually get the situation under control, also eliminating the pandemic’s devastating impact on the economy.

Another sad moment of 2020 for the EU was, of course, the UK’s official exit. It was a very painful process, but largely chaotic on the British side. Even though we parted “in an orderly fashion”, the consequences will be felt on both sides for years to come.

Another unquestionably significant event of 2020 was the US presidential election. The pandemic, along with the events surrounding the US election, such as the attack on the Capitol, proved how fragile democracy is, as are we. It shows the importance of taking care of democracy and fighting for it every day. It is good that American democratic institutions have shown resilience and functionality and that Joe Biden became President of the United States. Undoubtedly, it acts as renewed impetus for the West as a whole to restore inclusion. For the EU itself, it is a challenge to effectively contribute to a revitalisation of transatlantic relations.

Another development has demonstrated the fragility and vulnerability of democracy in several EU member states, notably in the CEE region. Democracy has continued to deteriorate in Hungary and Poland, even though an article 7 procedure has already been initiated against them.

While it seems that civic society has suffered some losses in several EU countries, in some countries in our Eastern neighbourhood, we can witness its awakening, especially in Belarus, after the rigged presidential election, and in Russia, after the attempt to kill civil activist Alexei Navalny. The recent development in our Eastern neighbourhood is a great challenge for us Europeans. We are obliged to contribute with concrete steps and activities to support human and civil rights and their protection in these countries.

For the Martens Centre, 2020 was not only about adapting to a new way of working and interacting during the pandemic. It was about mapping the developments mentioned above and striving to come up with concrete solutions on how to face the key political issues and to prevent new ones.