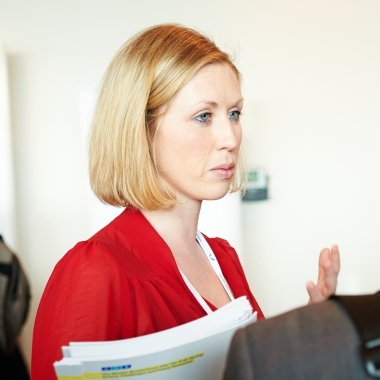 Kathryn was awarded a first class honours degree in Law and Irish from University College Cork (UCC), Ireland. During her studies, she worked for UCCs Students’ Union as an assistant to the Welfare Officer, where she was involved in the organisation of events, research and the daily activities of the Students’ Union. Kathryn also completed an internship with a national housing organisation where she worked on a student information campaign on tenancy rights as well as advising clients on their rights under the Residential Tenancies Act. Kathryn worked as a researcher at Fiontar, an interdisciplinary school in Dublin City University, on research projects including the creation of an online Irish language legal database. She was also a member of the editorial board of the student run law review at UCC. She went on to work in the private sector in France after graduation. As part of her study programme in UCC she spent a semester studying at the University of Montana, USA, where she studied Native American Culture and Religious Freedoms and the Philosophy of Law. These classes focussed on her main interests of governance and minorities. As part of this programme she also worked as a teaching assistant in the Liberal Arts Department and clerked for Judge Molloy in the U.S. District Court. In 2012 she enrolled in University College Dublin to earn a Master of Economic Science in European Public Affairs and Law. Within this programme she focused on governance and foreign policy. Her thesis examined the theory and meaning of the principle of solidarity in the European Union and its manifestation during the Arab Spring.