President of Hudson Institute: ‘The US and the EU need to find common ways to engage globally’ 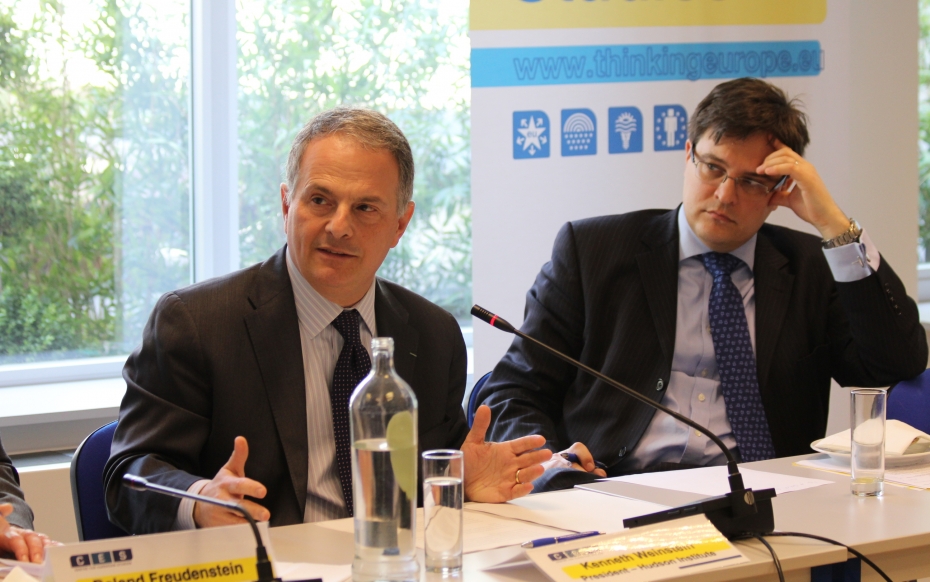 On the 22nd of April 2013, the Centre for European Studies (CES) kicked off a new series of events entitled ‘Food for Thought’; the first event in the series, entitled ‘Leading from Behind: U.S. Foreign & Defence Policy Ten Years after Kagan’s Of Paradise and Power’ welcomed Kenneth Weinstein, CEO and President of Hudson Institute in order to discuss Obama’s foreign policy and its implications for the transatlantic relationship.

In his introductory remarks, CES Director Tomi Huhtanen emphasised the importance the Centre for European Studies, as the official think tank of the European People’s Party attaches to transatlantic relations. As part of the transatlantic research agenda, the Centre for European Studies regularly publishes studies and organises events with experts and senior officials from both sides of the Atlantic; one of the most important events of this kind is the Transatlantic Think Tank Conference, a conference which takes place every year in Brussels and Washington.

Dr Weinstein started his intervention by recalling that ten years ago, the launch of a second U.S.-led war against Saddam Hussein exposed intra-NATO differences of temperament and philosophy in sharp relief. This stark divergence of perspective on both sides of the Atlantic then led political scientist Robert Kagan, in a famous essay and subsequent book titled ‘Of Paradise and Power’, to declare that Europe and the U.S. had come to inhabit two separate planets entirely. According to Kagan, the Americans were ‘from Mars’, emphasising force projection in international affairs, while Europeans were ‘from Venus’, favouring ‘laws, rules and transnational negotiation and cooperation.’

Ten years later and taking into consideration the different imprint left by President Obama on US foreign and defence policies, the metaphor seems to have inversed and the planets seem to have realigned, according to Dr Weinstein. In support of his argument, he cited the examples of Libya, Syria or Mali, where the Europeans had taken the (military) lead. In the meantime, looking at troop draw-downs in Iraq and Afghanistan or diplomatic engagement with Iran, Americans seem to have turned inward ‘with an almost Venusian vengeance.’ In an even more worrying development, Dr Weinstein pointed out that US’s unilateral acts vis-à-vis its European partners were frustrating the latter, leading to a decline of influence of the West as a whole in global affairs.

After this initial setting of the scene, the participants engaged in a lively comments and questions session, whose main conclusions were the following: the US and the EU need to continue to work together during these challenging times for the transatlantic Alliance, especially with the rise of new world powers such as China and others. While neither the Mars nor the Venus approaches are sufficient on their own, the two powers need to combine them in a manner that leads to improved outcomes, particularly when it comes to intervention, reconstruction and withdrawal strategies. In the case of Syria, for example, the ‘leading from behind’ doctrine should materialise into concrete actions that provide a model and set an example for future transatlantic burden sharing.

The fact that the Europeans are recently sometimes taking the leadership in their own neighbourhood is not per se a bad thing, and it can signal that they are ready to be a real partner in the transatlantic framework – although this has, in the past couple of years, pertained to France and Britain only, not to the entire European Union. However, American leaders need to communicate their changes of strategy better, so that the Europeans do not feel alienated. Last, but not least, Dr Weinstein concluded that both American political parties should communicate strategic doctrine principles better and more often to the American public, so that they build public support for US foreign policy.